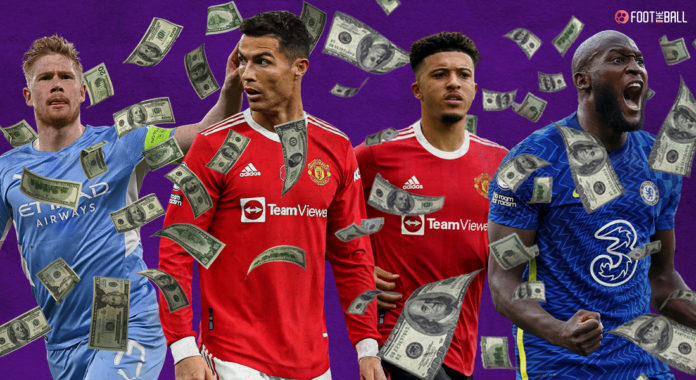 One of the hottest stories of the summer is already heating up. It is no secret that Erling Haaland is set to leave after the 2021-22 season. There have been a host of top admirers from all across Europe.

Manchester City have emerged as the frontrunner for quite some time. It is now being reported that the Cityzens are ready to trigger the £63m release clause.

Liverpool are going for the quadruple in style. What makes it so impossible and can it be done?

Moreover, City are willing to make Haaland one of the highest-paid players in the Premier League, quite possibly the highest. That would certainly be a sizeable shakeup for the wages structure of the league. In addition, Mo Salah and Antonio Rudiger have also been in a wrangle with their respective clubs over new increased wages.

Could Mo Salah LEAVE Liverpool? Here are the clubs who could sign the mercurial attacker

Therefore, it is no surprise that the Premier League continues to be the most attractive destination. Haaland joining on mammoth wages will place him on the top of the ladder. FootTheBall looks at the top-earning players in the league currently.

The French midfielder has had rumours circulating about his impending departure almost every season. Pogba’s contract is finally set to run out after the 2021-22 campaign and there have been talks of a new one. Moreover, there have also been whispers of the board wanting to make him the highest-paid player.

Paul Pogba is Leonardo’s top priority for this summer’s transfer window, and Leonardo has already spoken with him. Paul Pogba wants to join Paris. Manchester United have understood that Pogba will not be extending his contract with them. #MUFC #PSG [@Santi_J_FM] pic.twitter.com/ucWdyaVHZ2

However, everything will be revealed in due time. With a new manager coming in and new players expected to join, Pogba’s future remains uncertain. He has been a regular part of the first team when fit since last year, racking up one goal and nine assists in the league.

No matter what happens with Pogba, his salary will continue to remain among the highest in the world.

Read Also: Hannibal Mejbri can be the wildcard fit for Manchester United’s midfield next season

Pogba’s international teammate is a defensive beast in midfield. Kante earned his reputation with Leicester City in their remarkable title triumph. Since joining Chelsea, he has been one of the key fixtures of the lineup.

Kante is famed for his never-ending energy and ability to run around after the ball.

BREAKING: N'Golo Kante refused to let Chelsea pay his image rights into an offshore account which would have helped him avoid tax.

In addition, he has made over 200 appearances in a career that has also seen him win another league title and the Champions League. Therefore, there is no doubt that Kante will be staying with Chelsea for a long time in the future if all goes well.

The ever-reliant wide attacker for Manchester City who almost left the club in 2021. Sterling has been an important part of the furniture since Pep Guardiola’s arrival. He has hit 10 goals and three assists in the Premier League for 2021-22.

Sterling has been one of the most recognizable players in the league ever since his arrival on the scene. He continues to rake in the money, and with his career going strong, he will remain a strong asset.

The £100m signing for City in 2021. Grealish’s arrival was a bit of a surprise, given the price tag and how he has not yet reached his full potential. Therefore, the middling form of Grealish was expected in most quarters. Truth be told, it is also extremely hard remaining a starter for City in the attack.

"Where's the £100 million been spent." 🤷‍♂️ Has Jack Grealish struggled to live up to his price tag this season?

The amount of talent they are almost unmatched in football. Nevertheless, with Grealish’s big transfer came the big wages. There is still plenty of time to live up to that kind of money but there is no reason why he cannot do it.

A continuous story for the Premier League that has often turned sad and unpredictable. It is fair to say that Chelsea has not got what they were expecting. Lukaku has struggled to score and be impactful, with his infamous interview making things even worse.

The Belgian striker has been left on the match for several matches with Timo Werner moving up the order. Moreover, there are also suggestions that he could leave Chelsea in the summer.

Is Romelu Lukaku the worst signing of the season? 🤔 pic.twitter.com/dsrK25uhX5

That will be a big waste of money for the Blues who are already facing economic uncertainty. Though Thomas Tuchel continues to back him in public, Lukaku’s reunion has not been a happy one.

The third French international on this list. Varane sealed a move to Old Trafford last year with United needing to upgrade the backline. He has been a steady hand, showing his vast experience whenever playing.

The problem with United have been manifold but Varane can certainly hold his head high. He had been a top player for Real Madrid and continues to earn as a superstar which he is.

One of the most exciting young players in Europe who has certainly shown glimpses of his true talent. Sancho had been scouted heavily by Manchester United before his eventual transfer. After a poor start to life back in England, Sancho has slowly been getting back to top form.

Wages for 20/21 were £322.6m according to latest accounts to June 30, 2021 released today. 20pc increase this season (as forecast by CFO Cliff Baty on investor call today) would take that figure to £387.12m reflecting the huge salary costs of Ronaldo, Varane and Sancho #mufc https://t.co/4NPqFM4Xed

Three goals and three assists is not what one can expect from such a quality player because Sancho is way better. United will keep pushing him to get better and he will define prominently under the new manager.

The longtime Red Devils custodian has been a mostly reliable presence in goal. De Gea had chances to leave Old Trafford but has continued to show his faith. That is why he has been handsomely rewarded with his latest contract offering making him top earner. De Gea cannot be faulted for United’s poor defensive performances and will remain a starter for the foreseeable future.

The two-time PFA Player of the Year is the league’s top playmaker-in-chief. De Bruyne has been integral in leading Manchester City’s charge for silverware every season. The midfielder gained headlines when negotiating his latest contract.

It is not just clubs but players too who benefit from consulting data, as was the case when Kevin de Bruyne signed a new contract with Manchester City last year. https://t.co/xfX8s9MhaL

De Bruyne came with a data analyst who quantified De Brunyne’s impact at City. Moreover, the expected contribution in the coming years was also worked out which allowed De Bruyne to ask for a big deal. He was granted his wish and City have a happy-chappy to push on for more glory.

No surprise who takes the number one spot. Ronaldo has been a global phenomenon for many years. His return to Manchester United took everyone by surprise but the impact has not had the same effect. Therefore, there is no way he can be allowed to leave by United next season.

Can Manchester United’s season be saved? We find out here

Cristiano Ronaldo has reclaimed top spot as the world’s highest paid soccer player over Lionel Messi. He is set to earn $125 million before taxes in the 2021-22 season, with $70 million coming from salary and bonus for his return to United. [@Forbes] pic.twitter.com/K7zJlFV3Mp

Ronaldo has 20+ times across all competitions and is a key reason for United still in the hunt for top-four. Though his new wages is still a significant drop down from his previous earnings, it is enough to see him top the charts in the Premier League.