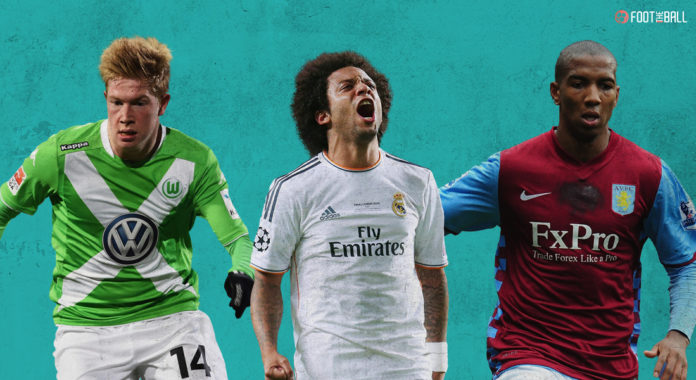 The winter transfer window is always the time for rejig rather than rebuild. January sees clubs signing players which can boost their expectations from the season and get better over the remaining months. Nevertheless, there have been several notable signings across Europe since the concept of the transfer window came into reality in 2002. FootTheBall brings you the 10 best January signings, selected for their impact, value, and persona that catapulted them to global stardom.

Starting with the player who is once again making news in January. Coutinho’s return to the Premier League, albeit on loan, comes on the back of a disastrous four-year spell with Barcelona. However, supporters of Aston Villa are giddy with excitement having signed Coutinho and rightly so when one considers what he did for Liverpool.

The Brazilian attacking midfielder was signed in January 2014 upon the recommendation of former boss Rafael Benitez and it did not take long for him to establish himself as an immediate starter. Running with the ball and striking long distance worldies? Check. Mastery over set-pieces? Check. Dazzling skills all the time? Check. Coutinho ended his Reds spell with 54 goals and 45 assists across all competitions from more than 200 appearances. His linkup play with Luis Suarez and Daniel Sturridge almost brought Liverpool a title but the manner in which he forced his exit still rankles with fans.

The long-time Barcelona favourite made his mark in Spain with rivals Sevilla, joining for €495,000 from Bahia in 2003 after spending the previous season on loan. One of the earliest players to make use of the winter transfer window, Alves quickly became the starting right-back for the club with both parties benefiting immensely. Alves lifted the Supercopa de Espana, his first senior trophy, along with the UEFA Cup (twice), UEFA Super Cup and the Copa del Rey appearing more than 250 times across all competitions.

The domestic cup competition victory came after a wait of 60 years for Sevilla as Alves spent six glorious seasons there. He left for the Catalans in 2008 for £30m after a move to Chelsea fell through the year before.

It is a great time for Villans to find both Coutinho and Young in the team together. Though the former English international is more of a role player, nobody associated with the club can forget his first spell in the mid-late 2000s. Young joined from boyhood club Watford in 2007 for more than £9m, a club-record fee at the time. The fleet footed winger was picking up Man of the Match awards for fun and even made his debut for the Three Lions in his debut season.

Young ended the campaign with 17 assists and was named as a member of the PFA Team of the Year. The following season, Young became the first player to win three Premier Player of the Month awards in the same year but the greater honour came in the form of being selected as the PFA Young Player of the Year. He would remain for a further two years, racking up nine goals and 14 assists in all competitions in his last campaign. Manchester United signed Young in 2011 for £17 million, making almost double the profit.

The former AC Milan youth player never got to have a first-team role with the Rossoneri. Having been loaned out to a number of French clubs, it was with ASSE that he struck gold. Aubameyang spent the final six months of the 2010-11 season, scoring four goals and making three assists in Ligue 1. Saint-Etienne signed him on a permanent basis in January 2012, and his two seasons in France proved absolute gold. Aubameyang netted 16 times in his full debut campaign and helped Les Verts win the Coupe de la Ligue too, which became his first major professional trophy.

He's scored 10+ every season since. 🔥 pic.twitter.com/7yJt5bcdbC

The 2012-13 campaign is considered by many to be his breakout year with the Gabonese forward racking up 19 goals and eight assists. Furthermore, he was also named in the Ligue 1 Team of the Year and won the Ligue 1 African Player of the Year award. His performances led to Borussia Dortmund signing him in the summer of 2013 where he would go on to reach even greater heights.

Another Brazilian full-back coming to La Liga from their native country. Marcelo joined Los Blancos as a 19-year-old in January 2007 and has remained at the top of the European game for 15+ years. Having racked up more than 500 appearances across all competitions, Marcelo struck up a deadly partnership with any forward who played ahead of him down the left. It was most memorable with Cristiano Ronaldo during the absolute heydays of the last decade.

His crossing and driving runs along with overlapping qualities have seen him rise to become the current captain of the team. Four Champions League titles, five La Liga titles, and two Copa del Rey titles along with a host of other individual accolades point to a very successful stay for player and club.

One of the most beloved players at Inter during their peak years under Jose Mourinho. The Portuguese manager signed him in January 2010 and Pandev wasted little time making an impact. He assisted the game-winners in his first two league appearances before scoring in his third. Pandev was instrumental in a derby win over AC Milan that same month as he quickly became an indispensable part of the squad that would go on to win the treble.

Pandev started in the final against Bayern Munich, becoming only the third player from his country to win the Champions League. The striker would go on to spend just another season at the club, picking up the Super Cup and the Club World Cup along the way. Despite his short spell, Pandev is mostly remembered at the San Siro and still remains active in Serie A.

There are fewer players more closely attached to the fabric of Bilbao’s journey over his three spells. Aduriz made his debut for the Basque club in 2002 but could only make three appearances during his first time out. He returned in January 2005, going on to score 23 times over the following three seasons. Aduriz left once again, before coming back for the third and final time in 2012. He would not score less than 14 goals in the following five campaigns, hitting a career-high 20 in La Liga during the 2015-16 season.

Needless to say, Aduriz became a fan favourite during his long stay and though silverware was minimal (Supercopa de Espana in 2015), he did pick up some individual accolades. Aduriz was the recipient of the Zarra Trophy and top-scorer in the Europa League (both twice) along with being in the competition’s team of the season for that fantastic season.

Having endured a tough time with Chelsea, making only three appearances in the first half of the 2013-14 season, the bid from Wolfsburg came as something of a surprise. £18 million for a player untested at the top of league football would soon prove to be a bargain. He would immediately show himself to be an efficient passer with the ability to find teammates seemingly at will. However, it would be the following season when he would really make his mark. Wolfsburg finished second in the Bundesliga behind 10 goals and 20 assists from the Belgian midfielder.

De Bruyne also scored in the final of the DFB-Pokal as Wolfsburg won the competition. For his exploits, he would be named the German Footballer of the Year and would go on to claim the German Supercup too. Manchester City would sign him for £55 million in the summer of 2015, and would develop into one of the best players across the world. His latest goal was the decider against Chelsea as City remained on top of the Premier League table.

Before the arrival of the much heralded BBC, there was Gonzalo Higuain for Los Blancos. Signed for €12m from River Plate in January 2007, it would take some time for the Argentine to find his feet. 10 league goals in his first 18 months had some questioning whether he was the right fit but he would prove his detractors wrong fully. 49 goals in 65 appearances over the following two years, including 27 in 2009-10 cemented his status as one of the most feared strikers in Europe.

He left for £35m to go to Napoli where he continued his prolific scoring. pic.twitter.com/joISJzVn3G

Higuain ended up with 121 goals in 262 appearances over a seven-year stay that yielded three La Liga, one Copa del Rey and two Supercopa de Espana titles. He would leave in the summer of 2013 for Napoli who would pay €40m for his services and Higuain would continue his goalscoring exploits in Italy for many years.

The American would certainly not make the list of the best ever signings for the Premier League in January but for sheer impact and cultural identity, few come close. Dempsey joined The Cottagers for $4m in January 2007, the-then highest fee for a player coming from the MLS. He would go on to justify his price many times over, becoming an instant fan favourite. Dempsey’s first goal for the club would be the winner against Liverpool that saved Fulham from relegation.

…Congratulations on an incredible career, @clint_dempsey – our @premierleague top scorer! 👏

He would have many memorable moments as his unerring finishing, delightful forward play and workrate endeared himself to fans. In the Europa League, Dempsey and co. reached the final in 2010 with the American hitting one of the goals of the season against Juventus in the round-of-16. Dempsey would end up spending six seasons at Craven Cottage, scoring 50 league goals to become Fulham’s top scorer in the competition, along with becoming the club’s Player of the Year twice.