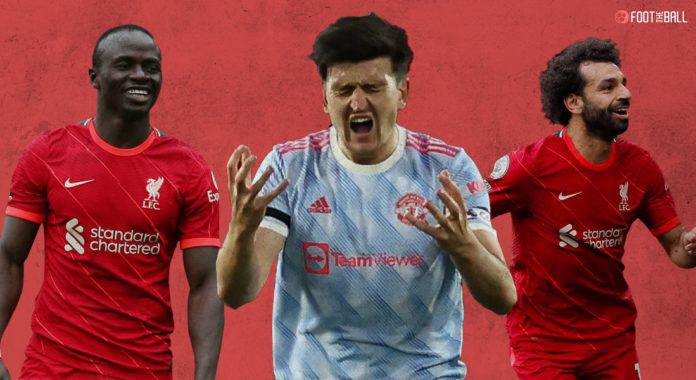 Liverpool vs Manchester United. One of the most storied rivalries in football which had a very lopsided result early in the season. Nevertheless, it is a new day and both teams will be going for the win.

As expected the game got its first goal immediately. Sadio Mane’s through ball set Mo Salah scampering in behind the backline. His pass across goal was perfect for Luis Diaz who finished expertly. 1-0 with five minutes on the clock.

6' – What a move! Mane slides the ball down the right for Trent and Salah to chase. Mo puts a low cross in, Diaz arrives to finish emphatically. GET IN.

The evening got worse soon after, with Paul Pogba hobbling off with injury. The game was motoring along in a predictable direction with Liverpool dominating possession. The second arrived eventually. A beautiful sequence of passes ended with Mane scooping the ball for Salah to run onto and finish calmly.

22' – WHAT. A. GOAL. Incredible movement and crisp passing around the edge of the box sees Matip find Mane, who plays a ball around the corner for Salah's run and he slots in.

The rest of the half was pretty much the same. United were pegged back intensely as Liverpool rang circles around them. Ralf Rangnick had a lot of work to do if his side were to do something different after the break.

Jadon Sancho came on for Phil Jones in hopes of being more attack-minded.

United were certainly improved in the second half. Sancho was troubling Liverpool’s backline with Anthony Elanga and Jesse Lingard moving forward too. Jurgen Klopp was not happy with how his players were reacting and allowing United to attack. The Reds’ front three were blunted now but not for long.

An hour on the clock at Anfield. #MUFC | #LIVMUN pic.twitter.com/9bhJnkJOFT

Andy Robertson won the ball off of Elanga and charged forward before slipping Diaz to the left. His low cross was finished off first time by Mane on his left foot to really put the game to bed. Diogo Jota came on and soon had his own starring moment. He slipped in Salah who took a touch before dinking the ball over David de Gea with five minutes remaining.

That was all there was to be as Liverpool picked up another dominant win.

There was no real surprise as to the final scoreline. Though it was not five this time, Liverpool were in complete control right from the start. They had over 70% possession across both halves with United having to just move around. The midfield was having a field day, with Thiago bringing out his full bag of tricks. Mane was extremely effective as a playmaker through the middle.

5 – Mohamed Salah is the first player in Premier League history to score 5 goals against Manchester United in a single season. Alive. pic.twitter.com/UfHPTbxaal

The pass for the second goal was exquisite as it fooled everyone inside the stadium. Though they started the second half in a bit of a jittery manner, the two goals were the icing on the cake. Klopp knows that the run in till season’s end will be tough but the first step is done.

There was big news even before kickoff for United. Jones starting a league match for just the second time this season as Rangnick went for a back three. That proved ineffective within 300 seconds as Diaz scored. United did try their best to hold on defensively but the opposition were just too good.

74 – Manchester United have now conceded more @premierleague goals against Liverpool (74) than against any other opponent in the competition. Leaky. pic.twitter.com/Ddc0f9fLMS

The away side were second to every ball and were in dire need of an outlet that did not exist. They did show a bit more courage after the break, Sancho having a few nice moments. However, that was as good as it got with Marcus Rashford’s poor game highlighting everything wrong with the club right now.

Manchester City have dropped down to second position. United lost further pace in the race for fourth spot. Given the mood Liverpool are in, it is impossible to call who wins the title as the business comes up fast.