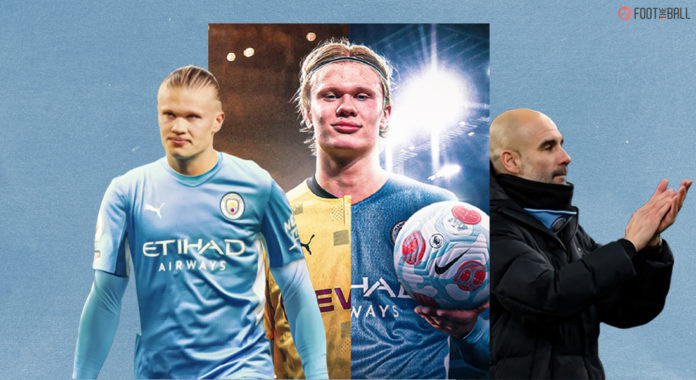 Erling Braut Haaland exploded onto the European football scene through his performances at RB Salzburg in the Champions League in the 2019/2020 edition of the competition. He was picked up by Borussia Dortmund in the January window of the very same season. Dortmund fought off the likes of Manchester United, Bayern Munich, Real Madrid and other elite European clubs for Norway’s golden generation’s poster child.

After his move to Germany the now 21 year old went on to become one of the most prolific strikers in the world. After it was reported that there is a 60 million Euro release clause in his BVB contract which becomes active in the summer of 2022, rumours circled the lethal frontman. Finally this week it was announced that Manchester City have secured the signing of Erling Haaland , who will be moving to England for a bargain. Haaland’s move, including his contract at City and his discounted transfer fees, will end up costing the Manchester club upwards of 150 million Euros over the 5 year contract.

Seems like the conversation Foden and Haaland had in the 2019/20 season during a match between City and Dortmund paid off.

The EVOLUTION of Erling Haaland?

Could you see him in a City shirt next summer? 🤔#mancity #mcfc #haaland pic.twitter.com/roIp6v0y4U

Nonetheless a 60 million Euro discount on the forward’s value meant that this move was a ‘no-brainer’ for City. Pep Guardiola’s Manchester City have been in the hunt for a proven goal-scorer especially after Sergio Aguero’s emotional departure from the club. This has seemingly cost them the Champions League twice. The additions of Julian Alvarez and Erling Haaland will definitely look to fix the ‘bad luck’ Manchester City have had to deal with in the UCL.

But the addition of Erling Haaland to this Manchester City squad makes them automatic favourites for every trophy next season. It also makes their squad the most expensive team ever assembled. Rightly so because the squad is dripping with quality. The attacking support staff who have been filling the void of a recognized striker will be delighted with the fact that Manchester City were able to secure the signing of Erling Haaland.

Erling Haaland will earn over £500,000-a-week should he join Manchester City this summer 🤑💸 [Daily Mail] pic.twitter.com/GQBcYtnZNp

Let’s see how the Norwegian striker fits into this Cityzen’s squad , what he brings to this team and the potential problems surrounding Erling Haaland’s move to Manchester City.

What does he bring to Manchester City?

Goals, goals, goals and more goals! That is what Erling Haaland will bring to Manchester City in the most simple terms. Since the start of his career Haaland has scored 134 goals in 182 games in all competitions. He also holds the record of reaching 20 Champions League goals the fastest since the conception of the competition.

This season for the first time ever Guardiola’s team does not have the best attack in the league according to expected goals. Even though the difference between them and Liverpool is very small. Jurgen Klopp’s rampaging Reds were the outright best attack in the league last season. Liverpool also boast Darwin Nunez now and added the amazing Luis Diaz to their ranks in January.

After the sale of Ferran Torres only Gabriel Jesus is the only recognized striker left at City and this season only KDB, Sterling and Mahrez have scored 10 goals or more. It is also highly unlikely that any of them will hit the 20 goal mark before the end of the season.  This Manchester City’s goal in the league have come from everywhere which is testament to Guardiola’s coherent attacking system.

Kylian Mbappe (22) 🆚 Erling Haaland (20) stats this season in all competitions. 😍

Who do you prefer?👀 pic.twitter.com/rjhVVXRvPo

More than the above Haaland brings physical dominance and an aerial threat, something Guardiola’s Manchester City have never possessed in attack , and would add a complete new dimension to their attack. Standing at a colossal 6ft 3 and capable of reaching 32 kmph at full tilt, he is capable of dominating any defence because of his sheer size and pace.

OFFICIAL: Manchester City have confirmed they have reached an agreement with Borussia Dortmund for the transfer of Erling Haaland pic.twitter.com/2dvCQ856yR

He also brings relentless off-the-ball movement whether it’s when he is running into space behind the defence or clever sidesteps in the opposition box, Haaland instinctively knows where the space is. This will come in extremely handy especially with elite creators in the team such as the likes of De Bruyne, Grealish, Mahrez, Foden, Cancelo, Bernardo Silva all boasting excellent creative numbers. Let’s see how he fits into the this Manchester City squad

How does Haaland fit into Manchester City?

The most gaping hole in this Manchester City squad has been at the no.9 position. With extremely blessed ball carriers in their ranks in Grealish, Foden, Silva, Sterling and Mahrez, Manchester City are well capable of getting the ball into the opposition penalty box but often do not have anyone with the natural instinct to get at the end of the chances they create.

Not only that, Manchester City despite adopting a version of Pep’s tiki-taka style they create most of their chances through crosses and cutbacks from the by line. Ironically none of their attackers are over 5ft10 , nor could bully the big physically dominant defenders of the Premier League in the box. Thus they hardly score any goals from them. De Bruyne and Mahrez are the best shooters in this Manchester City squad in terms of volume and shot distance. Haaland beats both of them in these metrics,as he takes more shots than them and they are taken closer to the goal. In fact his numbers are extremely similar to that of Robert Lewandowski, which bodes well for the blue side of Manchester.

24 – Riyad Mahrez has now scored 24 goals in all competitions for Manchester City this season; only Mohamed Salah (30) has netted more for a Premier League team in 2021-22. Wand. pic.twitter.com/newuGcqLb5

Haaland will certainly play through the centre with Foden, Sterling, Grealish and Mahrez rotating between themselves to support him from the wings. Except the elite creators on the wings Manchester City possesses probably the most elite creator in Europe in Kevin De Bruyne, who would be grinning from ear to ear after Haaland’s move was finalised. Their partnership is something that will petrify Premier League defences next season.

Even though this is the perfect move for all parties involved, there are some underlying problems that should be discussed about Erling Haaland’s move to City.

Firstly, Haaland has always played in Leagues where teams have heavily relied on fast transitions, meaning he has mostly used his pace to get in behind defences. He has hardly ever played against a low block week in week out, something Haaland would have to do for a possession heavy side like Manchester City. In turn, he would often be forced to play with his back to goal, but with his size and pace he would eventually adjust his game but it will be a challenge for the wonderkid.

Micah Richards analyses what Erling Haaland to Manchester City will mean for both the club and the Premier League 👇 pic.twitter.com/sP3oLDhozi

Secondly, Erling Haaland is a physical specimen , in fact he is pushing the limits of his own body. Which has resulted in several injuries since his move to a more demanding league in the  Bundesliga.  Now that he is going to be moving to the Premier League, if he is fit he will score but it could also mean that if he keeps pushing the limits of his body he might have to spend a lot of time on the treatment table.

Clubs need to think about this moving forward!

Not sure if that is something Manchester City would want in the long run.

Lastly, this Manchester City squad is one of the pressing teams in the league and Haaland is not a very active presser. In fact Mahrez who is the worst presser in the team is still better at it than Haaland. This is something Guardiola will look to rectify urgently.

In conclusion, this is a great move for Haaland and Manchester City. In fact it should slightly scare their rivals in the Premier League to what City would be capable of producing on the pitch next season with Haaland in their ranks. Despite some teething problems and adjustments he will surely score a bucketload of goals in the league especially if he is able to stay off the treatment table. He might even win them the elusive Champions League trophy.