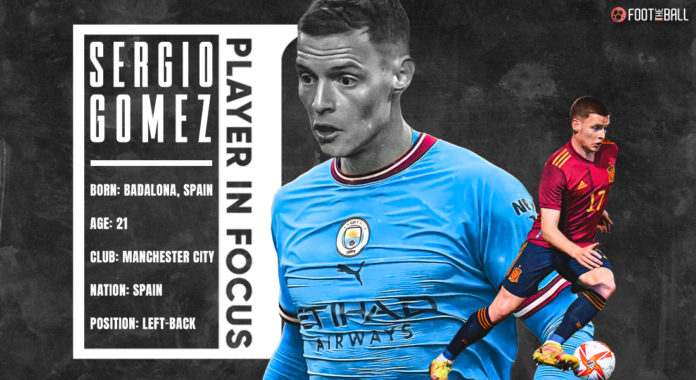 Manchester City have had a busy transfer window in terms of arrivals and departures. Erling Haaland has arrived from Dortmund, while Kalvin Phillips has joined from Leeds United. On the other hand, Raheem Sterling has gone to Chelsea, while Gabriel Jesus and Oleksandr Zinchenko have joined Arsenal. Zinchenko’s departure, in particular, had left Pep Guardiola without an able deputy for Joao Cancelo. That is until they signed RSC Anderlecht’s Sergio Gomez.

The 21-year-old has been one of the best talents in the Belgian league. In a season where Anderlecht finished behind surprise packages Royale Union Saint-Gilloise, and Club Brugge, Sergio Gomez was one of the few positives. The La Masia product has consistently been rated highly and now has the chance to fulfil his potential.

City’s trust in him is immense as they are ready to deploy him as Cancelo’s deputy. So, who is Sergio Gomez, and what does he bring to Pep Guardiola’s side?

One thing is clear about Sergio Gomez: he is the typical Guardiola left-back. The Spaniard plays similarly to a particular Barcelona star Jordi Alba. But, while he is a good defender, Sergio Gomez earns his bread and butter through his attacking talents.

The youngster loves to venture forward to create overloads in the wings with his left winger. Despite his 5ft 7 inch frame, he is fast and uses his pace to make intelligent runs behind the opposition’s defence.

However, speed can only get you so far. What makes him more deadly is his exquisite crossing skills along with elite progressive passing. Most of his assists have followed the exact blueprint. First, he makes an intelligent run behind the right side of the defence. He then follows it up by delivering a dangerous ball for his striker in the box.

Excl: Sergio Gómez to Manchester City, here we go! Verbal agreement reached with Anderlecht. Fee will be more than €10m, closer to €15m – to be signed soon. 🚨🔵 #MCFC

Sergio has good chances to be part of City team – otherwise, he will be loaned out to La Liga side Girona. pic.twitter.com/HHG1GvIOpL

Before the 2021-22 season, Sergio Gomez had played extensively across the front line. However, then manager Vincent Kompany saw, one of the best defenders of his time, saw something else in the youngster. So Kompany drafted Gomez at the left-back to use his attacking power on the wings.

Kompany’s tactics stressed a compact shape except for the fullbacks. This forced the other team to mark the players, always leaving the fullbacks with lots of space which was the ideal situation for a player like Gomez.

The name says it all: Check out Xavi Simons, a dutch midfielder similar to OG Xavi

As mentioned earlier, Gomez’s strength is chance creation, and this is where he was a star last season. The fullback scored six goals and provided 11 assists in the Jupiler Pro League. No fullback in the league provided as many assists as Gomez, which shows his talent and the reason City decided to snap him up.

Gomez was the team’s chief creator, creating 65 chances, the most for his team. While he is impressive at delivering accurate balls into the box, making intelligent runs, and using his pace to outmanoeuvre rivals, Gomez is equally good at carrying the ball. According to the data analytics site Soccerment he completed more dribbles than any Anderlecht player.

Kompany’s tactics placed heavy emphasis on build-up play. The former Manchester City player used short, incisive passes to move the ball forward. And Sergio Gomez was an integral part of it. The Spaniard made 2024 passes in the league, the sixth-best and the most in the Anderlecht squad.

Sergio Gómez can't stop. Today with his 10th assist this season. Additionally, he has 6 goals (stats for Anderlecht and for Spain U-21). Sensational form. Certainly many big clubs are watching him closely. Excellent LB and winger. pic.twitter.com/W2myWKOU2I

Gomez rarely uses tackles and clearances in defence to win the ball back. Rather he depends on closing the player down, which causes the opposition to move the ball down the pitch. He does not rank in the top 100 for clearances and is also far behind in interceptions, and blocks.

His pace also makes him a target of the opposition. The 21-year-old was fouled 36 times last season.

The last season proved that Gomez has successfully transitioned from an attacking player to an attacking fullback. Gomez is a modern fullback who fits Manchester City’s philosophy perfectly.

Pep Guardiola sees fullbacks as ‘hybrid midfielders’ where they slot alongside the defensive midfielders to create overloads in the middle of the park. Due to Guardiola’s successful reign as coach in Catalonia, his tactics, philosophy, and style also known as the Tiki Taka are rigorously drilled into every La Masia graduate, which will help Gomez acclimate to City’s squad quickly.

Gomez is also a brilliant crosser and can single-handedly create goals scoring chances with his feet. He also beats Cancelo in goals, assists, and chances created. While he may have done it in a far less competitive league, the stats show that Cancelo cannot rest on his laurels as City now have an able deputy.

While Zinchenko was a solid player, Gomez, with his skills, could easily better his stint at City. And if he keeps the rate of progress, he showed last season, then a starting role could also come by.

At 21 years of age, Sergio Gomez has completed what is perhaps a dream move for many footballers. However, while he may have been the best player for Anderlecht, City is a different beast. Gomez has been signed to be an understudy to Cancelo. So while he may get chances in cup competitions or some lowly Premier League fixtures, he at least needs a season or two under his belt before he could be considered for a starting role at City.

Guardiola could also send him out on loan if he thinks Cancelo could last the season. Gomez is also a cheap option, with City reportedly paying £13 million, a low-risk option. If he succeeds, he will be a transfer masterstroke; if he fails, it would not be a big issue for the Blues.

For now, Gomez needs to sit down, train and listen under perhaps the best coach in the world.