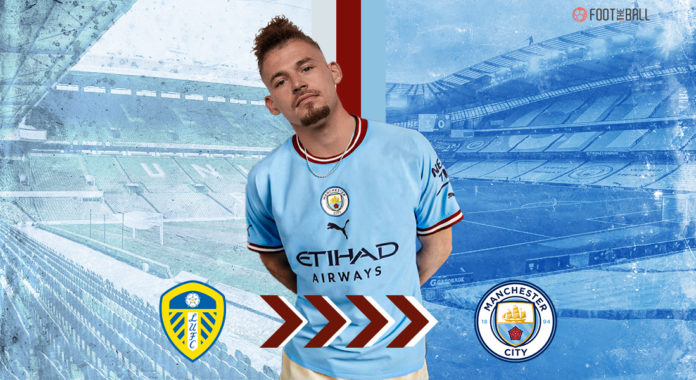 It was a roller coaster of a season with a thriller, but in the end, Pep Guardiola’s Manchester City won the Premier League title. The Cityzens fought with Jurgen Klopp’s Liverpool till the end to emerge victorious. However, Guardiola is not resting on his laurels and has already clarified that the team needs signings. Julian Alvarez and Erling Haaland have already been signed to bolster the attack. And now the English champions have signed Leeds United’s star player Kalvin Phillips to strengthen their midfield.

The 26-year-old will act as competition for Rodri as City plan an assault on all fronts come the following season. Last season, City could only manage to win the Premier League bowing out of every domestic cup competition. In addition, they were also on the end of a stunning comeback in the Champions League against Real Madrid.

And while City have won six titles since the Sheikh Mansour takeover, the Champions League has eluded them. However, the signing of Kalvin Phillips indicates that the team will not rest until they have accomplished their mission.

But how will Phillips fit at Leeds? Is he worth the money that City have spent? And, can he help City win multiple trophies?

Kalvin Phillips has been the most impressive player for his team, along with Patrick Bamford and goalkeeper Illan Meslier. The Englishman is a proper defensive midfielder tasked with protecting the backline. After Jesse Marsch was appointed manager, he played in a two-person midfield where his job was to disrupt the rhythm of the opposition’s attacker.

His heatmap from the 2021–22 season shows precisely that. Phillips’ maximum involvement is between the centre circle and his goal line. However, he also covers a lot of ground in a match and can play with the same intensity for the entire game. Due to this, under Marcelo Bielsa, Leeds usually played a 4-1-4-1 system, deploying Phillips and the lone defensive midfielder.

💪 Kalvin Phillips’ stats for England at the Euros (squad rank)…

What makes him unique is that he is equally adept in both making tackles and applying pressures. And he is pretty accurate with it, too, making him the engine of Leeds United. His passing range is limited but good enough for his position.

Due to the Leeds 4-1-4-1 system, there was a massive space in the team’s defensive lines. This meant that it was Phillips’ responsibility to snuff out the attack. In this case, he had to resort to any means of stopping the attackers, be it tackles, interceptions or blocks. While it is a hard job, doing this for multiple seasons has made him a defensive nightmare for rivals.

Phillips is also very helpful for the team in the build-up plays. Under Bielsa and even Marsch, Leeds play out from the back. In this case, Phillips has to act as a viable passing option for the centre-backs. His positioning during this phase ensures they don’t succumb to the opposition’s high press.

Phillips’ role has altered slightly after Marsch’s appointment. While he remains the defensive starlet, he now plays in a more balanced two-person midfield. And the stats prove it. Due to this change, Phillips has some help when it comes to defensive duties from his midfield partner.

He has experienced a decline in tackles won, aerials won, interceptions, and fouls won. And while Leeds have had a horrid season, and to some extent, Phillips has too, the decline in stats also represents that he is not solely responsible for defensive duties. And a deeper look at his stats shows his standards haven’t dropped.

We’re all but resigned to losing Kalvin Phillips & here is the comparison in stats with and without KP in the #lufc team since 18/19.

He has also been an expert in breaking the opposition team’s attack. His 2.38 blocks per 90 minutes are up there with the best midfielders.

So, while his numbers have dropped, the success rate remains unchanged. This shows that it is a change in a system that has affected his stats and not his form.

Trequartista: The position in which Diego Maradona dazzled the football world

Is Kalvin Phillips worth the money that City have spent on him? The short answer is yes, and the long answer is yes. According to media reports, Manchester City will pay €42 million with €8 million as add-ons. This is a significant coup in the hyper-inflated football transfer era. For example, after one impressive season, Liverpool brought Darwin Nunez for €100 million. There is no denying Nunez’s talent, but he only has one good season under his belt. On the other hand, Manchester City have a proven Premier League talent for quite a cheap sum, considering the English tax.

In addition, Phillips has honed his skills in a system very similar to Manchester City’s. Both teams emphasised the need to play attractive, attacking football. In addition, both teams want their defensive midfielders to be a part of a build-up play.

Manchester City have reached verbal agreement with Leeds to sign Kalvin Phillips on permanent deal, as per @David_Ornstein. Talks at final stages. 🚨🔵 #MCFC

We must also remember that Guardiola got Rodri, a player steeped in Atletico’s defensive system, acclimated to City’s style. Based on this, Phillips’ adaptation into the City squad could be smoother.

While Kalvin Phillips is one of the top defensive midfielders in football, he is, for now, City’s second choice in his position. Rodri, for his part, has been impeccable in the City’s system. And it will be a challenge for Phillips to dislodge him.

However, it doesn’t mean he will be a benchwarmer as he will bring some other qualities on board. Last season, Manchester City saw a capitulation of enormous proportions as they conceded two goals in injury time to lose against Real Madrid in the Champions League. The lack of defensive leadership was for all to see. With Phillips in the ranks, the team will have the option of fielding a more defensive-minded player in the closing stage of a game.

Phillips will also be a brilliant cover in case of a long-term injury to Rodri. For the last two years, Phillips has proved that he belongs at the highest stage. Now, he has got his move and has the chance to perform there.