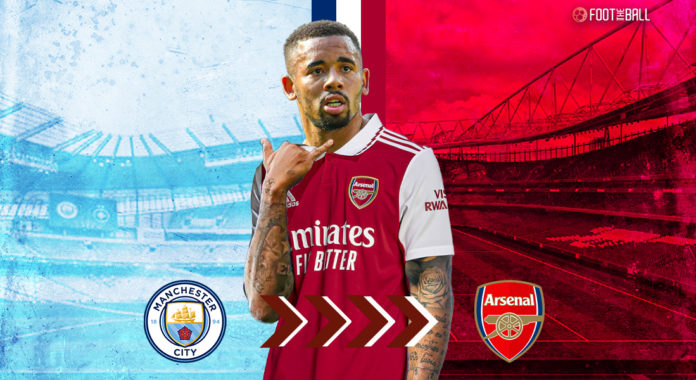 Among the crucial factors in Arsenal missing out on Champions League football was their lack of a natural goal-scoring forward. In contrast to their rivals Tottenham Hostpur, who boast two of the most lethal finishers in the league, the Gunners lack prolific goal-scorers within their attacking line. As such, Arsenal have filled that gap with the signing of Manchester City’s Gabriel Jesus for £45m.

When the Brazilian joined the Etihad from Palmeiras, he was supposed to be City’s heir to the waning and soon departing Sergio Aguero. Five years on, it hasn’t quite gone to plan for Jesus through no fault of his own but down to the lack of opportunities. And with the Brazil international now officially a Gunner, how does he fit in at Arsenal and will Arteta be able to get the best out of the versatile striker? Here we grade the transfer of Jesus to Arsenal and whether he has the potential to be a hit or miss.

Meanwhile we also take a look at – All or Nothing: Arsenal

Perhaps the most important trait Jesus exhibits is his work-rate. Whether his team is in or out of possession, the Brazilian is a relentless force and a hassle for opposition backlines to cope with. His movement is incessant and constant, often making selfless runs to create space for teammates or trying to pose as a progressive passing option for his teammates. He presses with intelligence and intensity, curving his runs to mark passing lanes and harrying opponents when in possession.

But, when you look at his Manchester City record since his introduction into the team, he’s appeared in 155 league games, scoring 57 goals which makes for tremendous reading when you consider that most of those 155 appearances have been from the substitutes bench. In all competitions for the club, he’s made 234 appearances, and is just six shy of joining the 100-goal club for The Citizens, a true testament to the kind of ability he possesses but also the committed and diehard nature he offers when he is given the opportunity.

His ball-carrying is even better. While not especially physically imposing forward, Jesus is robustly built and can ride opposition challenges with ease with his strength. His close control and trickery mean he can be a dribbling threat from a range of situations. Whether in transition, one-on-one against a defender, coming deep to receive and carry forwards, or spinning in behind with his back initially facing the goal, he can influence the game in multiple phases with his dribbling ability.

It is within this context that the club’s interest in Jesus makes sense. For years at Manchester City, the Brazilian has thrived across the front line and been an instrumental part of Pep Guardiola’s attacking rotation. His role has always been fluid, meaning he is comfortable dropping off, pulling wide, or pushing up depending on his starting position and the movement of his teammates. While he was previously criticized for a substandard goal-scoring return, his 0.44 non-penalty goals per 90 from 0.44 npxG is impressive, particularly in the context of his other abilities.

Jesus’ passing is sharp and creative, capable of influencing the game both from dropping very deep to move the team up the pitch or play intricate one-twos and through-balls in and around the penalty area. He’s also comfortable with both feet, making him harder to predict and defend when feeding teammates.

It’s arguably safe to say, the Brazilian had been rather underappreciated at the Manchester City, and it’s a shame that his career at the Etihad is to be cut short this summer considering he was supposed to be the long-term replacement for Sergio Aguero upon his exciting arrival in January 2017.

One of the key factors regarding his future — aside from the fact he is out of contract in 2023 — is that this is a World Cup year in which players want to be playing regularly enough to be in contention for their countries. He wasn’t even in the last Brazil squad, one which will have proved damaging to his chances of featuring at the World Cup later this year.

So, when weighing up his options it’s easy to believe that a new club, some regular starts and a few goals would give him more chances and that’s where a potential move to Arsenal could well be perfect not just for him but for Mikel Arteta’s men in the long run, as he constantly scours the market for a future number nine to finally replace Pierre-Emerick Aubameyang and Alexandre Lacazette at the end of the season.

At face value, Jesus would tick a lot of boxes for Arteta. Crucially, at 25, he holds so much potential to blossom into one of the Premier League’s best number nine if he isn’t already, and also become a swift household name at the Emirates. Also, Arteta already holds valuable knowledge of the player seeing as he coached him for a couple of years as he formed part of Pep Guardiola’s coaching staff before he was appointed Arsenal manager in December 2019.

Considering the constant chopping and changing in the City team, which is totally understandable considering the vast amount of quality at Guardiola’s disposal, it was highly unlikely the forward was to be a guaranteed fixture in the first 11.

Every single game Jesus plays, he expresses and showcases his ruthless hunger, desire and the fact that he has a point to prove even when struggling for regular starts in the City. It is why he has become a key figure when he does play. For his new employer’s Arsenal, Arteta has specifically targeted youthful players with room for growth and most of all determination as one of their vital aspects, and the enthusiasm and exuberance of those players have spread throughout the squad.

Jesus will be no different, and he could form the icing on the cake in Arteta’s squad as the consistent goalscoring number nine they desperately crave. The Brazilian would suit the way Arteta wants to play, as he is technically and tactically gifted. Always positionally aware and willing to fight for the shirt. Incredibly versatile, quick, skillful, agile and a tireless worker off the ball. Such traits would make Jesus an ideal and perfect fit for the young forward line at the Emirates. At 25-years-old, he provides an inexperienced attacking line a valuable level of leadership and know-how while still being in his prime.