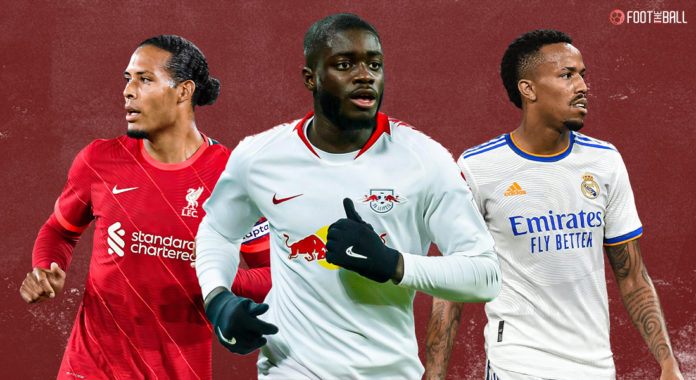 The world of defenders can often feel a lonely one. The most prestigious individual awards are geared towards attackers and forwards mostly. Franz Beckenbauer and Fabio Cannavaro remain the only true defenders to win the Ballon d’Or.

Matthias Sammer is also there, but he was converted into a sweeper from a midfielder. No defender has won it since 2006, and nobody puts 100+ blocks in a season over 40+ goals. However, no team would be able to properly compete without a stout backline.

The tighter your defence, the better your fortunes of avoiding a loss. There are several great defenders in the world currently, and here are the best of the lot.

The top 10 defenders in world football

The Liverpool centre-back has been one of the best defenders in the Premier League in recent years. Van Dijk is extremely quick across the ground with his long legs and reading of the game.

On the other side of the field is Darwin Nunez, who could be a massive source of goals for the Reds

His tall frame means he wins 4.02 aerial duels per 90, putting him in the 92nd percentile of defenders. Van Dijk’s attacking prowess is also refined, with almost 75 passes attempted per 90, completing 91% of them. Liverpool’s strong form at the back has helped Van Dijk’s cause and he has won the Premier League Player of the Year in 2019.

Another ball-playing centre-back with 4.30 progressive carries per 90. Marquinhos has been an ever-present with PSG since 2013. He completes 93% of his passes, with more than 73 attempts per 90.

Marquinhos has also benefitted from the players ahead of him being excellent in their roles themselves. He will definitely be one of the more important players for Brazil at the 2022 FIFA World Cup in Qatar.

Marquinhos’ international teammate was one of the most important components for Real Madrid in 2021-22. Militao was a fixture in the side as Los Blancos won the league and UEFA Champions League double.

One of Militao’s main assets is sprinting across the turf and putting in challenges in a timely manner (2.04 tackles per 90). Moreover, Militao is also an able ball carrier, who could also chip in with goals.

One of the finest upcoming defenders, Bastoni has had a meteoric rise to the top. He plays on the left of the three-man backline with Inter, and is a bomb going forward. 1.18 progressive passes received per 90 for the 99th percentile amongst defenders.

Additionally, he also recorded 4.56 progressive carries, and applied 12.12 pressures per 90. Bastoni excels when it comes to getting his team out of trouble, and Inter are benefitting massively from it. Just a shame Italy will not be in Qatar for the FIFA World Cup.

When your central defender has six assists, the team is bound to dominate. Bayern Munich won their 10th consecutive Bundesliga title, with Upamecano being a key pillar. The French international excels in a variety of areas. He attempted 88.37 passes per 90 which was the 99th percentile among defenders.

Moreover, Upamecano record 5.67 progressive passes and 5.77 progressive carries per 90 which were eye-popping for a player in his position. On the defensive end, Upamecano applied 14.76 pressures and 2.48 tackles per 90.

One of the greatest success stories for Spurs under Antonio Conte. Romero has earned a name for being a very physical defender who anticipates danger very well. He applied 15.47 pressures, with 3.66 tackles and 2.44 blocks per 90.

Romero has been a standout force as Spurs sealed Champions League qualification. Moreover, he was central to Argentina winning the Copa America 2021. There were some question marks over whether Romero would succeed, but he has answered emphatically.

A true defender’s defender, who is all about keeping opponents at bay. Tomori is not your average forward-driving centre-back. He loves keeping things tight, and will fight for every loose ball.

Why Chelsea selling Fikayo Tomori was the wrong move

Laporte has been a constant source of threat for opponents due to his deep passing range, and ability to switch play. Manchester City are inherently a much better team when Laporte is firing on all cylinders.

RB Leipzig are known for developing talent and Gvardiol is their crown jewel in defence. The Croatian defender has made a solid start to his career in Germany, combining attack with defensive acumen.

Gvardiol made 5.31 progressive passes and 5.45 progressive carries per 90. Furthermore, he recorded 3.29 interceptions, and completed 0.89 dribbles per 90. Clearly, he is comfortable on the ball and Leipzig have placed their faith in the rising star.

Get a detailed scout report of Josko Gvardiol right here

The newly minted signing for Real Madrid was one of Chelsea’s best players in 2021-22. Rudiger’s superb commitment and full on diving into clearing dangerous attacks has been a hallmark of his game.

Moreover, he is a very able shooter from distance for a defender. Rudiger’s no-nonsense approach to the game has earned him plenty of plaudits. Thomas Tuchel has turned the fortunes of the German international around and he will be looking to replicate that form in Madrid.

WINDOW NOT OVER YET!