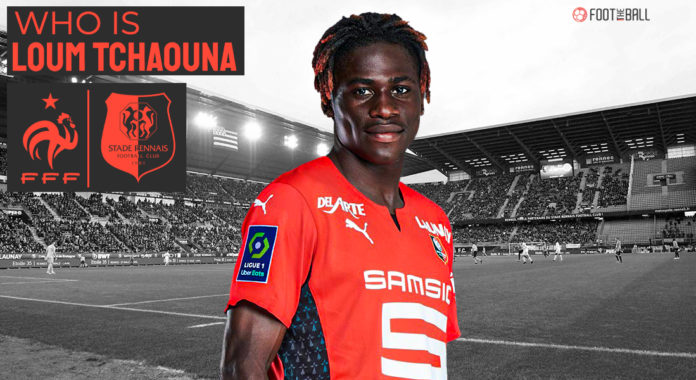 To say that Rennes produces some of the best talents through their academy is an understatement. From the likes of Eduardo Camavinga, Lesly Ugochukwo, Kamaldeen Sulemana and Martin Terrier, they have been nothing short of exceptional for Rennes both at youth level and for the senior team. Adding to the list is rising forward Loum Tchaouna.

The French forward is causing waves at both youth and senior level and for all the right reasons. To talk about recent events, Loum Tchaouna struck twice for Les Bleus victory over Italy to top the 2022 Under-19 Euro finals goalscoring charts.

But who is Loum Tchaouna and would he be able to hit similar heights to his former and current academy teammates?

One of the stars of the French U19’s campaign at Euro had been Stade Rennais winger Loum Tchaouna, who has scored in every game in the tournament – the young winger has made 10 appearances in Ligue 1 this season for Rennes. Although he had no goal involvements for Rennes in his debut season, Manchester City and PSG were reportedly observing the player’s performances for Les Bleus this summer.

Stade Rennais have surely discovered another promising talent, in the form of Loum Tchaouna, but only time will tell if his polishing is done appropriately. But there’s no denying the fact that he is at the right club in terms of development.

In the recent Euro’s U19 final, a match that lasted with no shortage in intensity, which clearly makes you want to see it again in action. So, inevitably, the young man was entitled to the praise of his family at the end of the game who were present in the stadium.

Having already made a mark as a goal-scoring forward in the Rennes academy and then as an occasional impact substitute for the first team, the Chad-born winger has been outstanding in his short senior Rennes career. With his direct running, dribbling and ability to beat an opponent, the left-footed forward is one of the hottest prospects in Europe. Courtesy of his top-notch off-the-ball running, the energetic 18-year-old is a top prospect who could be months away from a proper Ligue 1 breakthrough.

It wouldn’t be fair to judge a teenager in comparison with some of Europe’s finest. But it is the underlying stats that will give a good understanding of how Tchaouna has fared when compared to some of the best strikers in world football right now.

The teenage french prodigy takes 2.07 shots per 90 minutes, which isn’t bad when taken into consideration that Erling Haaland sits next with 3.49 shots per 90. Loum also has 1.03 shots on target per 90 and the closest to him is Harry Kane with 1.42 shots per 90.

The summer transfer window has already seen some major sales, with plenty more on the way.

These are the best sagas to follow right now!#TranferWindow #Transfers https://t.co/wEe12QG13B

Loum Tchaouna might be on the transfer list of many elite clubs, but not a priority. It makes perfect sense for all parties right now that are involved, that the player continues his development at Rennes.

The French striker no doubt has limitless potential and might even end up competing with some of the best in the world. A loan move would be the best solution for the forward right now, but with the pace that the Rennes are churning talent through their academy and chances distributed to the youngsters, staying at his current club looks the best option right now.