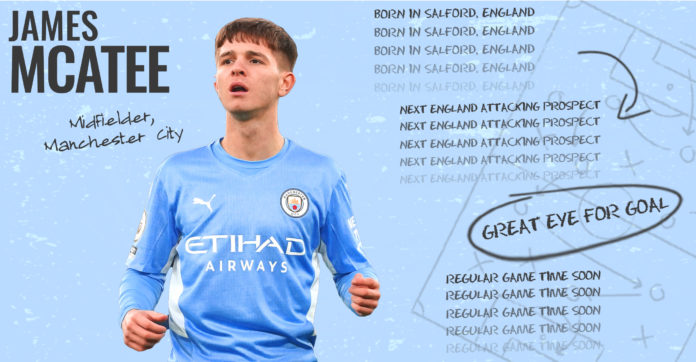 Manchester City have been England’s premier team in recent years. They have won four of the last five Premier League titles. Pep Guardiola has turned the team into a winning machine, and recently added Erling Haaland and Kalvin Phillips to their ranks.

Therefore, it is quite difficult for any youth player to break through on a regular basis. However, that is exactly what James McAtee is trying to do for the past two seasons. Nicknamed the “Salford Silva,” McAtee’s star has been on the rise for some time now.

The City Football Group just added a new club to their portfolio. Here are the full details

A regular youth international for England, McAtee is on the verge of a loan move to Sheffield United. The highly-rated star is looking for regular first-team experience. That a Championship team came in for him without him having any substantial senior football experience speaks volumes of his potential.

Moreover, his gameplay and talent has garnered praise from everyone around, meaning it is only a matter of time before takes the step up. City are keenly following his development, and are intent on making him a future star.

James McAtee is from the famed class of 2002 which has rising talent like Dutch talent Kenneth Taylor, Aaron Hickey, Hugo Ekitike, and others. Being a local boy, it was Manchester United who had first crack at him.

James and his brother John were training with the Red Devils, but the latter was deemed not good enough. The boys’ father decided to take both his children out of United, with City ready to pounce.

The Cityzens signed him as an 11-year-old in 2013, and he has quickly progressed up the ranks. McAtee is an attacking midfielder in the ilk of David Silva, racking up goals and assists.

He has been a regular over the past two seasons for the Elite Development Squad (EDS), making his senior debut against Wycombe Wanderers in 2021.

By then, McAtee had already scored eight goals and dished out nine assists in the Premier League 2 for 2020-21. Moreover, he had also netted against Chelsea in the FA Youth Cup final, which City won.

McAtee made more appearances in the 2021-22 season, including his league debut against Everton. England have also benefitted from his talents, as McAtee progressed from the U18s to making his debut for the U21s in June 2022.

James McAtee has made a combined six appearances in 2021-22 for the senior team. Needless to say that none of them produced a goal contribution. McAtee was mostly used towards the latter stages of matches, meaning he had little time to make a sizeable impact.

However, the 19-year-old was on fire for the EDS. McAtee won the Player of the Season in Premier League 2 for 2021-22. His 18 goals and seven assists showcased his full potential as a midfielder who can find the net. McAtee has been of the brightest talents in the academy for quite some time, waiting for a chance higher up. Some rate him higher than Phil Foden!

There is no doubt he will see his workload increase in the conceivable future. McAtee has been heralded as a playmaker, who can finish off moves comprehensively as well. Therefore, it is no surprise that Guardiola favours him.

The Catalan coach is something of a whizz when it comes to developing attacking midfielders. City would be hoping the loan to Sheffield is fruitful.

McAtee has been described as an extremely intelligent player who is always looking to improve. EDS manager Brian Barry-Murphy stated that McAtee has a “real hunger from him to develop his goal scoring, and drifting towards that goal.” A creative player who can roam all over the attacking half, McAtee loves to get on the ball and take on defenders.

Moreover, he is also a confident passer who loves a good dribble. Phil Foden, City’s greatest academy graduate, has spoken confidently of McAtee, namedropping him as a player whom “people will know.” McAtee has also shown his confidence during his outings with the first team.

There’s great confidence in him, as he looks to make things happen always. Of course, City and their EDS have several great players, but to stand out amongst them takes a lot of skill. McAtee has shown the temperament to succeed at the highest level for years to come.

Being a team’s top scorer while playing primarily as a midfielder is a great feat. McAtee outdid his peers and then some in the 2021-22 season. At one point, it had gotten impossible for Guardiola to ignore the youngster. McAtee has the potential to develop into the next great player in the Premier League.

The comparisons with David Silva are not without merit. McAtee has that elegant grace, drive, and tricky feet which elude opponents. He is an extremely tough player to stop, meaning City will benefit in getting the ball to him.

Liam Delap linking up with James McAtee for the third Man City U23 goal tonight, completing the comeback in the 94th minute.

They’re a talented duo, who continue to thrive in the EDS side.

McAtee can seamlessly slot in beside the likes of Kevin De Bruyne and Rodri. Moreover, Guardiola can also choose to use him further forwards, as he has done with the likes of Phil Foden. “When I first joined in training with the first team the tempo was so fast, but then I got used to it and it has made me such a better player,” revealed McAtee in 2022.

Therefore, there are a number of options for McAtee going forward. While his immediate future lies at Sheffield United, his long-term future is certainly at Manchester City.

Needless to say, there had been furious speculation regarding McAtee’s future. Several clubs were interested in taking him on loan. Sheffield United won that race but not before City tied him to the club with a long-term contract. McAtee signing a new contract that lasts till 2026.

McAtee said upon signing, “There is so much more to come.” Therefore, it is clear that he is planning a future with City. Like his teammate, Cole Palmer, it will not be easy. City are stacked with superstar talent and have enough financial resources to just sign anyone they like.

However, Guardiola and the board have been trying to pivot to a more youth-centric approach in recent times. In that regard, the EDS will be the likeliest option which is being led by McAtee, Palmer, Liam Delap, and others.