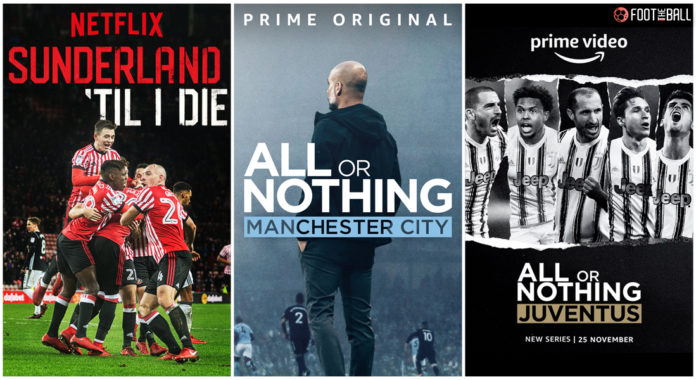 The inner workings of a sport are mostly a closed off matter these days. Fans and onlookers have to speculate on what is going on behind-the-scenes. A change was brought by Manchester United CEO Richard Arnold meeting fans at a pub to discuss transfer plans.

Those are the impromptu plans that happen once in a blue moon. The wider coverage of access is provided in the new-age documentaries and docuseries.

Netflix and Amazon Prime have been the leaders in this market, focusing on players and clubs alike. Of course, some have gotten more fame than others, but all of them remain truly special.

With an array of options to choose from, it could be hard for viewers to know which are truly the best ones and which just glorify entities. Therefore, FootTheBall ranks the best in-depth football documentaries to watch right now.

The 2018-19 Bundesliga season was one of the closest in recent years. Of course Bayern Munich won the title, but Borussia Dortmund came mighty close. Only two points separated the big rivals. Luckily for fans and enthusiasts, it was all covered in this docuseries on Amazon.

🎥 Borussia Dortmund will soon be featured in a documentary series on Amazon Prime after a camera team followed the club this season. Dortmund will receive €5m from Amazon. #BVB pic.twitter.com/NziYrt25as

There was heavy coverage with all the important figures at the club, and even a surprise cameo from Jurgen Klopp. Dortmund are one of the most beloved clubs in the world, meaning the inner workings are always interesting. There was in-depth look at how the fans prepared themselves, and the Yellow Wall.

Viewers also got to realize how close the club came to financial ruin in the 2000s. Moreover, it was also great to see fan favourite Marco Reus return from injuries and put in the work. The series has losses and victories, meaning there is an emotional rollercoaster involved.

All or Nothing: Juventus (Amazon Prime)

An unique season in the recent history of Juventus. Andrea Pirlo’s appointment in 2020 as manager came was a big surprise, and there were massive doubts as to how he would fare.

The season was different in a lot of ways, with longtime manager Max Allegri leaving, and the influx of new players. Meanwhile, the other contenders for the Serie A title had gotten stronger, meaning Juventus had to be on their guard.

The docuseries explored the relationship among the various clubs, the fans in the city and around Italy. There is real excitement before match days, and Juventus function as a true unit. Moreover, there is also the spectre of locker room footage from big matches.

However, the season would be a far cry from the successes of old. Juventus struggled for much of the season, eventually finishing in fourth place. Moreover, they were also knocked out of the Champions League by Porto.

(via All or Nothing: Juventus) pic.twitter.com/LxepBTqFdK

Though Pirlo guided the team to two trophies, the Italian Super Cup and Coppa Italia, it was an underwhelming return. Viewers also witnessed the initial talks of the European Super League from one of its founders, Andrea Agnelli. Pirlo was let go and Cristiano Ronaldo left the following season.

A battle cry for the fans as they attempted to make their way back to the Premier League. Leeds United were famed for their European exploits in the early 2000s, but had spent more than a decade in the second division. However, the appointment of Marcelo Bielsa was seen as the turning point for a club mired in underachievement.

The 2018-19 season began with extreme optimism as the club spent most of the weeks in the top two spots. There are conversations with every influential figure at the club, including a lengthy interview with Bielsa himself.

The club’s form hits a tailspin in the final few weeks, meaning they had to settle for a playoff spot. However, they lost out to Derby County in the semis, meaning another season in the second-tier. Thankfully, the cameras were kept rolling as the fans banded together in order to spur their team on.

The 2019-20 campaign was a grand success, even while being stopped by the coronavirus pandemic. Leeds were crowned champions and taking their place in the Premier League for the first time in 16 years. Bielsa was heralded a hero, and the players as warriors with fans getting the full value.

All or Nothing: Manchester City (Amazon Prime)

The first docuseries in the line of All or Nothing franchise. Amazon picked a perfect season in 2017-18, which worked out brilliantly for both parties.

Having finished third in 2016-17, Pep Guardiola and City were gunning to set things straight. The eight episodes follow the Catalan manager and his array of tactics in heavy details, as the season gathers pace.

All or Nothing: Manchester City has been nominated for the best Factual Entertainment award in the UK's National Television Awards!

Those living in the UK can vote here if you enjoyed the show! ➡ https://t.co/qpMtktiJ7r #mancity pic.twitter.com/sQo3u4CxF9

City are trampling opponents week in and week out. It is clear that they are going to end up as Premier League winners.

However, hurdles crop up in the Champions League, as a violent scenes before their clash against Liverpool make for a somber mood. The Reds get the better of the Cityzens. However, solace arrives in the form of winning the Carabao Cup.

EVEN MORE All or Nothing: Manchester City!

Finally, Manchester City do end up winning the title, and smashing several records along the way. They became the first team to end up with 100 points, and have the earliest confirmation win.

Moreover, they also had the most goals and most away wins. However, there was some controversy regarding the access of cameras, but all worked out in the end.

Sunderland ‘Til I Die (Netflix)

One of the most fascinating deep coverage sports documentaries that truly talks about emotions and loss. Produced by the Fulwell 73, the name itself is a tribute to Sunderland fans and a stand of the club’s old Roker Stadium. The series has two seasons, which charts the 2017-18 and 2018-19 seasons respectively.

Sunderland ’Til I Die (2 seasons)

Everything was in place for this to be a tale of redemption. It *may* not have worked out that way, but if you ever wanted to see what a football club means to a city, watch the opening scenes of the first episode. ⚪️🔴 pic.twitter.com/S9e5pjTRgC

The former was the first season in the Championship after the club were relegated. It was a disastrous affair, as there was no finances, two managers, and an absent owner.

Fans had to suffer through the steep fall, as the club lost 23 games to suffer another relegation. The following season was the club’s journey through the third-tier, which brought a new series of problems.

So starved of Football, am watching Sunderland ‘Til I Die cheering every single goal with full throated roars and occasional tears of joy even tho I know it all ends in Doom 🙌😢 pic.twitter.com/Y0l32DOaFs

The owners clashed with agents and fans, leading to players leaving and even thankful for getting benched. The full value of the docuseries is felt through a deep score, and the fact that there was unfiltered coverage. Moreover, the fact that supporters were losing hope, having tasted the riches of the top-flight makes it more haunting.