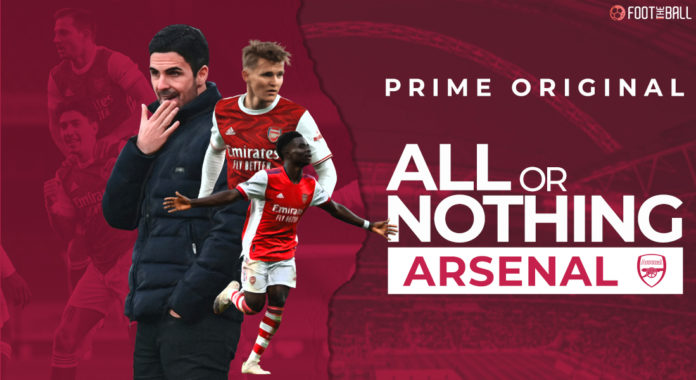 Arsenal are well known in the world of football, be it for trophies, successful players or managers and are also one of the most talked-about clubs in football and now their story will be viewed all around the world.

The Gunners are the subject of the latest All or Nothing series to be telecast on Amazon Prime, following in the footsteps of Manchester City, Juventus, Argentina, Brazil and Tottenham who have had similar series. But what could have been a fairy-tale story charting the club’s return to the Champions League since the 2016-17 season will instead be a hard watch for fans after Mikel Arteta and his troops collapsed at the business end of the season, which all-but handed a fourth place to arch-rivals Tottenham.

The most anticipated and probably watched in sports category series will show behind-the-scenes footage of what has already been a memorable 2021/22 season – from the Nottingham Forest humbling to the departure of ex-captain Pierre-Emerick Aubameyang.

‘All or Nothing: Arsenal‘, similarly like the Juventus version is going to be pure box office entertainment following their rollercoaster of a season.

​Manager Mikel Arteta has revealed he had no say in whether Arsenal should feature in the documentary, but did appear in the previous Manchester City series when he was assistant to Pep Guardiola. He has also said this could be the “perfect year” to showcase Arsenal’s progression under him. The first episode is set to release on August 4th.

What is All or Nothing: Arsenal?

Like the Manchester City and Tottenham Hotspur iterations of the Amazon series, the documentary will give viewers an inside glimpse at the north London club as cameras will be allowed inside Emirates Stadium – promising fans a look at how the club operates as they undergo a new season, along with exclusive interviews and insight from players and staff.

With the series slated for release in 2022, it can be assumed that it will cover the happenings of the 2021-2022 campaign, as these series usually take place over a substantial period of the campaign.

All or Nothing: Arsenal – Release date

All or Nothing: Arsenal which was set for August 4, 2022 has been finally released. Versions of the All or Nothing series including Manchester City and Tottenham have both been released in late August.

While 2022/23 kicks off a little earlier than usual due to the 2022 winter World Cup, there was a hope that it might drop a little sooner than the previous series, but given that it is set to include the whole 2021/22 season, All or Nothing: Arsenal is set to land in August 2022 as well.

Where to watch All or Nothing: Arsenal

You can cancel at any time during the month-long trial and Amazon Prime Video is available to stream on your mobile, tablet, TV or games console.

Prime members will be able to watch all episodes of All or Nothing: Arsenal anywhere and anytime on the Prime Video app for smart TVs, mobile devices, Fire TV, Apple TV, Chromecast, BT TV or online at Amazon Prime’s official website.

All or Nothing: Arsenal trailer

All or Nothing: Arsenal trailer sheds light on some truly dramatic stuff behind the scenes. Arsenal’s season was a rollercoaster ride with dramatic highs and damning lows. The short trailer has managed to capture all those emotions perfectly. You can watch the trailer below.

What to expect from the docuseries

It’s expected that it will revolve around the 2021/22 season at the Emirates Stadium.

This could include the aftermath of the European Super League saga, with Arsenal supporters being left infuriated by their club’s involvement in the 12-team breakaway.

Bukayo Saka returning from the European Championship following the racial abuse he suffered is also likely to be covered, as will their opening three defeats in the Premier League including the 5-0 hammering at the hands of Manchester City. Happier fixtures will likely be covered such as the 3-1 victory over Tottenham in the North London derby and the three wins over Chelsea, Manchester United and West Ham.

However, the season-end collapse of their top-four dream plus Arteta’s reign is certain to be under the spotlight. As is his relationship with Pierre-Emerick Aubameyang after the striker was stripped of his captaincy and farmed out to Barcelona in January. Even if the documentary ends up being a watered-down version of contentious events, Arsenal last season was so full of drama that the viewers are guaranteed to hop on a crazy ride.