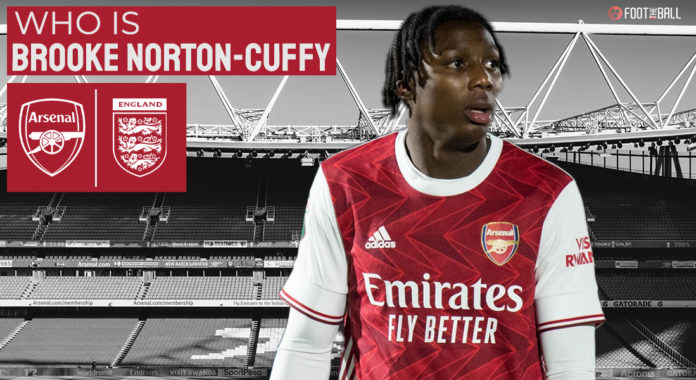 Arsenal are undergoing something of a youth revolution under Mikel Arteta. From signing youngsters and giving them crucial responsibility to shipping out older players, Arteta has refreshed the team’s spine. However, the youth quality is not always sourced from outside. The best case is always when a youngster breaks through from the academy. Fans certainly have more attachment to such players. Therefore, the rise of Brooke Norton-Cuffy is making Gunners‘ fans giddy.

After signing a new contract, Norton-Cuffy has ensured he has time on his side to wow Arsenal fans. If his recent rise has been any indication, that is precisely what he will do.

Who is Brooke Norton-Cuffy?

Brooke Norton-Cuffy is an 18-year-old Arsenal academy graduate who primarily plays as a Right-Back. With modern football undergoing a gegenpressing revolution, strong and athletic fullbacks are worth their weight in gold. Therefore, Brooke Norton-Cuffy’s rise at Arsenal is coming at an opportune time.

Brooke Norton-Cuffy has also turned out as a Left-Back, showing his two-footedness. Moreover, he has played some games as a Centre-Back too, where his physicality and aggression has allowed him to hold his own.

There was widespread relief and excitement when the news of his contract renewal made the rounds. Arsenal have elected to go into the new season with just Cedric and Tomiyasu as their recognised right-backs. Although they are good players in their own right, it was an admission of Brooke Norton-Cuffy’s potential that Arsenal did not seek an upgrade.

The teenage right-back has starred for England’s youth teams and spent the last season on loan at Lincoln City. He acquitted himself well in his first season of senior football. Sterling performances in England’s U19 Euro-winning campaign has further increased the excitement around his talent. It wouldn’t be surprising if Brooke Norton-Cuffy has a few appearances for the first team by the end of the season.

As said earlier, Brooke Norton-Cuffy has only played a single season of senior football. Moreover, the position he plays, Right-Back in a defensive team, ensured his impact was difficult to gauge in raw stats.

Brooke Norton-Cuffy made 17 appearances for Lincoln City in League One last year. He scored his first senior goal against Sheffield Wednesday in a 3-1 win for his side. That was his only goalscoring contribution along with a solitary assist.

However, it is the eye test that Brooke Norton-Cuffy passes with flying colours. Due to Lincoln playing in different systems, Brooke Norton-Cuffy was deployed as a CB, LB or even as a wide midfielder at times. He looked assured in position and was a willing runner for his team.

💬 "You need to be ready because it's a completely new environment and challenge."

🗣 Brooke Norton-Cuffy on his loan spell with @LincolnCity_FC

📺 Watch the full episode of Life on Loan 👉 https://t.co/AJkoEPIz0U pic.twitter.com/ePoM9irv5Y

On the international stage, he has made appearances for the U16s, U18s and U19s. He was recently a part of an exciting crop that won the U19 Euros, where a certain Carney Chukwuemeka thrilled everyone with his performances.

Brooke Norton-Cuffy is the archetypal modern fullback. He loves going forward and his breakneck recovery speed allows him to cover the whole flank throughout the game.

A season in men’s football also helped him improve his game. Brooke Norton-Cuffy slightly struggled against the savvy and guile of more experienced and physical strikers in League One. However, by the end of the season, he was tackling these challenges like someone who has been playing senior football for years.

His versatility of being able to play across the backline would make him a huge asset for any manager. Moreover, he is already comfortable playing as an inverted full-back. His progressive pass from the centre-midfield in U19 Euro helped England beat Serbia. Nowadays, central midfielders regularly move towards the wings to play as “Mezzala“, creating the need for fullbacks to man the middle of the park. Brooke Norton-Cuffy is already coached in every modern tactical revolution.

Having spent the last season on loan in League One, there were two choices for Brooke Norton-Cuffy. Now that he has signed a long-term contract, it looks likely that he’ll take the next step in his career by testing himself at Championship level. However, he definitely has the potential to play for Arsenal in the future. If Arteta fancies, that could even happen this season. Arsenal are playing in Europe unlike last season and with a winter World Cup on the horizon, teams with deep squads will prevail. For Brooke Norton-Cuffy, this could be a breakout year, whether at Arsenal or on loan somewhere else.