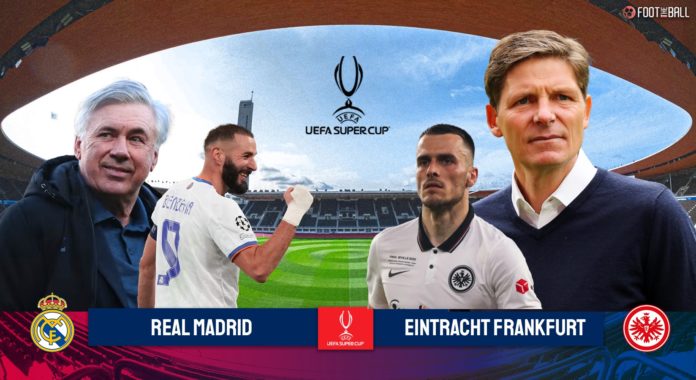 Champions of Europe Real Madrid face Europa League winners Eintracht Frankfurt in the traditional European curtain raiser. Not only were Los Blancos European champions but they also won the Spanish league title by a huge margin of 13 points. Frankfurt meanwhile, ended on a poor note domestically, after finishing in 11th position in Bundesliga. The two teams will face each other on the 10th of August, 2022 at the Helsinki Olympic Stadium and both of them will be eager to start off their campaign with silverware in a bid of lifting the UEFA Super Cup.

Barcelona and AC Milan have been the most successful in this competition after adding 5 titles each to their name. Chelsea were last season’s UEFA Super Cup winner after they beat Villarreal 5-6 on penalties.

Eintracht Frankfurt will be featuring for the first time in this competition and they will be the 5th German Cup to play the Super Cup. The only German team to win this competition in its history have been Bayern Munich, who won the title in 2013 and in 2020. The list of UEFA Super Cup best matches is a long and illustrious one.

Real Madrid lost their first game of the preseason to Clasico rivals Barcelona 1-0. Raphinha was the only scorer in that game who moved to Barcelona this summer.

Frankfurt’s first game of the 2022/23 Bundesliga season was against reigning champions Bayern Munich. The German champions did not seem like they missed their former talisman Robert Lewandowski who moved to Barcelona this summer. Frankfurt ended up losing the game 1-6 at home out of which 5 were conceded in the first half itself.

The Europa League Champions will have to be at their very best to have a chance of coming on top against the Spanish and European Champions. Ancelotti and his men will make sure they give their own best to start off in a winning fashion.

In other big news, this will also be the first game where FIFA’s “Semi-Automated Offside Technology” will be deployed.

🏟 Helsinki's Olympic Stadium
🔥 This is where we'll fight for our first trophy of the season!#SuperCup pic.twitter.com/HJs8oV2lPM

Caro Ancelotti has a full squad to choose from against Frankfurt. The Italian has rarely had the chance to call upon his entire squad without any injury issues. Among the squad, there are new recruits in Antonio Rudiger who moved on a free transfer from Chelsea and Aurelien Tchouameni who moved to Santiago Bernabeu, almost shattering their transfer record.

Frankfurt manager Glasner has a couple of injury concerns in defence, but otherwise has a clean bill of health from the rest of the squad. Aurelio Buta and Jerome Onguene are the only absentees for the UEFA Super Cup clash.

Ancelloti will once again count on his talisman for producing magic if needed. Although Real Madrid shouldn’t have many problems against the German outfit, Karim Benzema will be waiting to pounce on any mistakes served on his plate.

With Filip Kostic not included in the travelling squad due to his imminent transfer to Juventus, the spotlight automatically falls on summer signing Mario Gotze. The German World Cup winner who scored the winning goal for Die Mannschaft in the 2014 FIFA World Cup, moved to Frankfurt this summer from PSV.

The former German international has since had a downward trajectory in terms of career development. Although ever since moving to PSV as a free agent in 2021, his stocks had risen once again and Eintracht Frankfurt took notice and decided to bring him to the club.

Gotze’s influence and experience is going to be crucial if the German outfit want to capitalize on the slightest of chances they have during the encounter with Real Madrid.

This should be a straightforward victory for the 2021/22 European Champions Real Madrid. Anything less than that and fans will be worried of early season jitters, even more after Frankfurt were thrashed in the weekend by Bayern Munich.

Oliver Glasner will be adamant about not going down without a fight, but to beat Real Madrid who are a class above them might prove to be too much on the night. FootTheBall predicts a 3-1 win for Real Madrid and Carlo Ancelotti.