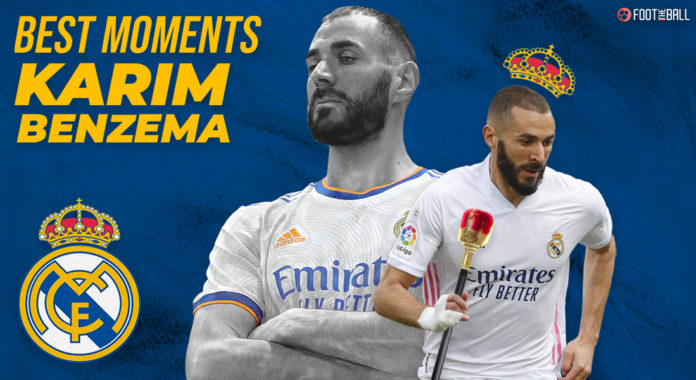 Age is just a number. Karim Benzema knows it better than almost anybody else. The Real Madrid hitman had a sterling 2021-22 season with Real Madrid. Aged 34, Benzema plundered 44 goals and laid on 15 assists in just 46 games en route to a League and UCL double.

Benzema has come into his own ever since the departure of Cristiano Ronaldo in 2018 as Los Blancos’ leading light. He is a strong contender for the Ballon d’Or for his exploits in 2021-22. As he completes his 13th anniversary as a Real Madrid player, we look at the 10 best moments of Benzema in a Real Madrid shirt. Also read: Why are Real Madrid called Los Blancos?

13 years ago today, Karim Benzema was presented as a Real Madrid player. Their new captain keeps getting better and better ⚪ pic.twitter.com/zd2LW7PTat

Before his twin hat-tricks, Karim Benzema had hit two more. His first one in the Champions League came in his debut season back in 2010. Facing Auxerre in the group stage, Benzema scored three times as Real Madrid won 4-0. The French striker has always had an enigmatic flair about him which was on the show right from the start.

Karim Benzema has 2 hat-tricks in the Champions League:

One of the most hallowed fixtures in world football, Real Madrid vs Barcelona is always special. Benzema holds the record for the quickest goal in the fixture history, set in 2011. Santiago Bernabeu hosted the tie, with Benzema scoring within 21 seconds. Unfortunately for him, Madrid would go on to lose the match 3-1. Benzema has an incredible record in El Clasico, scoring 10 goals and having nine assists.

Karim Benzema has had the honour of setting a few more team records along the way for Real Madrid. In a group stage match against Basel, he scored the 1000th goal for Los Blancos in European competitions. The Swiss side had no answer to Madrid’s overall dominance, losing 5-1 on the night in Spain.

This should come across as no surprise but Benzema is the most prolific goal scorer from France in the Champions League. He surpassed Thierry Henry’s haul of 51 goals in 2017 by scoring twice against APOEL Nicosia. Currently, Benzema stands at 86 strikes, just behind Cristiano Ronaldo, and Lionel Messi, and level with Robert Lewandowski in the charts.

Karim Benzema can rightly stake the claim for the greatest ever French striker, taking the coveted place from Henry. He has already crossed Henry in the Champions League scoring charts and overtook him in the all-time leaderboard too. Benzema’s brace against Mallorca in March 2022 took him to 413 goals in his career. Given how efficient he has been and is only increasing his form, the 500 mark should be in sight soon.

Real Madrid overcoming PSG in the round-of-16 in 2022 was the stuff of legends. Karim Benzema turned the tie on its head within a matter of minutes in the second half. That hat-trick, his third in the competition was also a bit more special. At 34 years old, Benzema became the oldest player to score three goals. Yes, that is right. Not even Cristiano Ronaldo or Lionel Messi has managed this feat, and they are unlikely to achieve it as well.

Karim Benzema has been around for a long, long time in the business of scoring goals. That is certainly true when it comes to the Champions League. Benzema has scored in 17 consecutive seasons of the competitions, behind only Lionel Messi. The 2021-22 campaign has saw him net 15 goals, just two behind Cristiano Ronaldo’s all-time record of 17 in a season.

Benzema has been in lethal form of late and scored his first hat-trick of 2021-22 against Celta Vigo last year. Given the captaincy by Carlo Ancelotti, he became the first Madrid player with the armband to achieve this feat since Raul in 2008. He spearheaded Madrid’s charge in Spain and Europe with goal contributions all throughout the season, eventually finishing with a League and UCL double.

Benzema is one of the greatest players in Madrid’s history and became the fourth-highest scorer in the club’s history in March. A penalty against Valencia in a 4-1 win ensured him a place amongst the pantheon of greats. He has since crossed Alfredo Di Stefano to move into third.

Individual records are all well and good, but Karim Benzema has always been the ultimate team player. So, his crowning achievement came in the UCL final last year, when as the talisman of the side, Real Madrid strode their way to yet another UCL title, beating the more fancied Liverpool in the Final. Benzema couldn’t score in the final to cap off a spectacular season, but he was the main reason his side was even in the final.

The win ensured Benzema now has five Champions League titles to his, the most by any player in the history of the competition. He stands at the top along with current and former teammates like Dani Carvajal, Luka Modric and Cristiano Ronaldo.