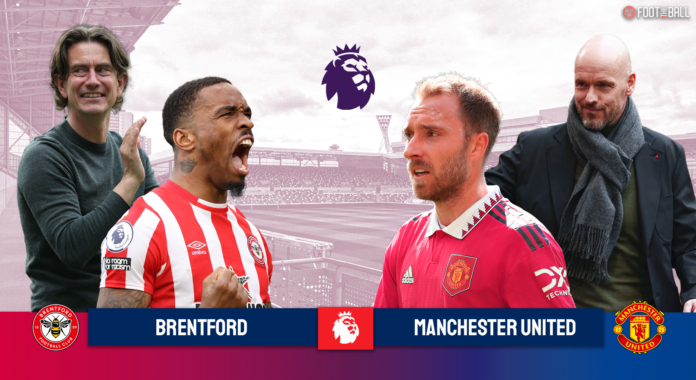 Second game of the Premier League season and Manchester United are already in crisis mode. After Graham Potter’s tactics made United look underprepared in their PL opener, United now travel to Brentford to face another potential banana skin fixture.

Brentford fought gamely for a 2-2 draw in their PL opener away to Leicester. The Bees will fancy their chances against a brittle Red Devils team where every player is suffering from a crisis of confidence.

After a somewhat optimistic pre-season, United went into their first game full of confidence. However, the reality check provided by Brighton looks to have sent the club into a tailspin. Fan unrest, unconvincing transfer targets, brittle players and a manager learning the ropes of a new country- Manchester United look like they are sleepwalking from one crisis to another.

Brentford, on the other hand, had a thrilling comeback draw against Leicester. Armed with their signature astute additions of Keane Lewis-Potter and Aaron Hickey among others, Brentford will be looking to pile on the misery. What should the fans watch out for in this game full of storylines? Here’s Brentford vs Manchester United match preview.

Brentford came through their exciting draw against Leicester without any injuries or suspensions. Thus, Thomas Frank has a full squad to choose from. Furthermore, new signings Aaron Hickey and Ben Mee slotted into the team well. Keane Lewis-Potter showed glimpses in his appearance off the bench and should be acclimatized to PL football soon. However, Frank has chosen to go with incumbent David Raya as his first choice GK, leaving new arrival Thomas Strakosha to impress in cup competitions for the time being. Josh Dasilva could start after his heroics off the bench last game.

Manchester United have one injury issue, but a big one at that. Anthony Martial suffered a hamstring injury before the start of the season which ruled him out of the opener. In his absence and Ronaldo’s transfer speculation/lack of match fitness, United started with nobody up top, with all their forwards rotating up front. Erik ten Hag is still looking for his ideal Man Utd XI.

Man Utd's €9m bid for Bologna's Marko Arnautović is said to have been rejected by the Italian club.

This is turning out to be depressing for United…..#MUFC #Transfers pic.twitter.com/Jewym72hIL

Martial looks set to be ruled out from this game too. However, Cristiano Ronaldo could start after getting minutes last game and the team improving with him. Elsewhere, ten Hag could ring the changes after average performances against Brighton.

For Brighton, it’s hard to look past Ivan Toney as their main man. The towering forward is a nightmare for defenders to deal with. Against a Manchester United backline suffering from lack of confidence, Toney will fancy his chances of scoring a goal or two. Ivan Toney is a complete modern striker, able to press from the front, runs the channels and is not afraid of a physical battle either. His duel against Lisandro Martinez will be one to watch out for. Martinez’s height has been touted as one potential issue against tall and physical strikers. This will be his first test.

ℹ️ The boss has explained where our no.14 could play long-term for the Reds… #MUFC

Manchester United will look towards the ex-Brentford man, Christian Eriksen’s playing style, to provide them with calmness in midfield after chaos in the last game. Fred and McTominay look incapable of controlling games with the ball. United looked better in the second half against Brighton when Eriksen was deeper. His line-breaking balls will be crucial and if he is able to find willing runners up front, then United could look like a well-oiled machine in midfield. Cristiano Ronaldo’s situation will also be one to watch out for.

While Manchester United are clearly the better team on paper, systemic problems remain in the tactical makeup of the side. Brentford, on the other hand, look like a team willing to fight for each other as per a clear plan. The first goal will be key and if Brentford get it, it could be a long night for Manchester United.