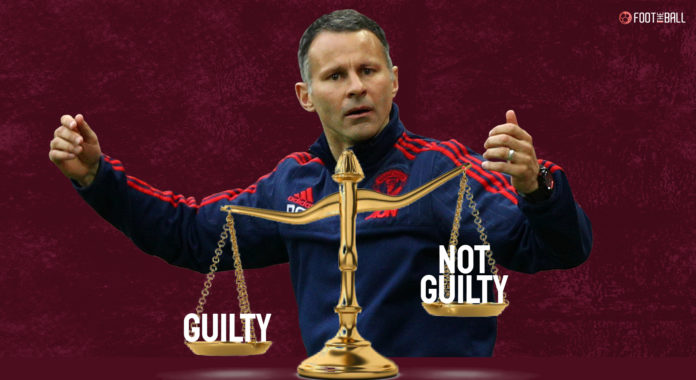 Ryan Giggs’ career has always been in the limelight on and off the field. However, one difference was that his on-field coverage was highly positive as he won a truckload of trophies at Manchester United. Unfortunately, the same cannot be said for his career off the field. The latest example of his problematic personal life is the newest case of assault against his ex-girlfriend. On Monday (August 8), the Manchester Crown Court started hearings on the accusations against the former Wales manager of assault.

United have already suffered a PR nightmare from Mason Greenwood’s case, and now they have Giggs case to handle. While he is a former player, it is expected that former United manager Alex Ferguson, teammate Gary Neville along with several United members are expected to give their statements during the trial.

Giggs has been accused of assault, threats, stalking, and being in multiple romantic relationships simultaneously. In addition, he is also charged with controlling and coercive behaviour against his ex-girlfriend Kate Greville and Emma Greville, her younger sister.

While Giggs was arrested on the accusations on November 1, 2020, the trial was mired with delays owing to a massive backlog of cases at the Manchester Crown Court.

Ryan Giggs case – What we know so far

The Ryan Giggs case came into the limelight when his former girlfriend Kate Greville informed police that the player had attacked her, causing bodily harm. Giggs was arrested on the same day. He currently remains outside the prison on conditional bail. The case began under judge Hilary Manley and is expected to last two weeks or more.

Ex-Manchester Utd and Wales star Ryan Giggs "deliberately headbutted" his ex-girlfriend, a court has heard.
Mr Giggs, 48, denies a charge of coercive behaviour and assaulting his ex-girlfriend and her sister. https://t.co/kPKq1dM9wI

Ryan Giggs has so far pleaded not guilty to all charges. The allegations made against him are as follows:

Under his bail agreement, he is debarred from contacting both the victims. Giggs denies the allegations. In a statement, he said,” “I have full respect for the due process of law and understand the seriousness of the allegations. “I will plead not guilty in court and look forward to clearing my name.”

Not just Ryan Giggs, here are 10 footballers who were charged with criminal cases

On the opening day of the Ryan Giggs case, the trial was started with a statement from Manchester Prosecution Service lawyer Peter Wright. In the statement, Weight read out all the charges and accused Giggs of manipulating Greville to keep the abusive, toxic relationship going. He also informed that photos of Greville’s injury and footage of security cameras and body cams would be shown to the jury during the trials.

After Wright’s remarks, Giggs’ lawyer Chris Daw made his remarks. While Daw accepted that Giggs’ language was rude, demeaning, and ‘far from perfect, his client never assaulted Greville. He also said that it was, in fact, Giggs that was attacked on one occasion by Greville.

Ryan Giggs 'kicked naked ex-girlfriend out of hotel room in row over him flirting with other women', court told. pic.twitter.com/hAf38hrjlf

On Day 2 of the Ryan Giggs case, the trial started with a police interview of Greville on November 18, 2020, two weeks after Giggs’ alleged assault and arrest. In the interview, she said that while the relationship started strong, she began to see a lot of red flags, after which she broke up with him and moved to Abu Dhabi.

However, Giggs later managed to convince her to continue the relationship. She added that it was in Dubai where Giggs had thrown her naked out of the hotel room and her belongings.

He would do the same thing at Salford Hotel in London and accused Greville of inciting him.

The 48-year-old also remained in relationships with other women, which caused significant emotional damage to Greville. She broke up with him again, after which Giggs would stalk her and send her threatening messages.

However, the most surprising allegation was when she said that Giggs was in a relationship with eight different women simultaneously.

The jury also showed pictures of Greville’s injury and screenshots of text messages between the duo. The Day 2 of Ryan Giggs’ case trial ended with Greville describing the head butt incident, which left her traumatised. Greville said this was the last straw, after which she called the police, and the case came into the limelight.

When Giggs was initially arrested, he was serving as the manager of the Wales national football team. However, immediately after his arrest, he was replaced by his assistant Rob Page, under whom Wales qualified for their first World Cup since 1958.

Throughout this time, Giggs remained suspended and had not relinquished his role. Finally, however, the long delays in starting the trial led him to resign from his post on June 20, 2022. Announcing his resignation, Giggs said,” “After much consideration, I am standing down from my position as manager of the Wales men’s national team with immediate effect. “It has been an honour and a privilege to manage my country, but it is only right that the Wales FA, the coaching staff, and the players prepare for the tournament with certainty, clarification and without speculation around the position of their head coach.”

While Giggs has expressed his desire to return to coaching after the trial, it remains to be seen whether Wales will welcome him back even if he is found not guilty by the court.

Things became “heated,” jurors told, and Giggs “entirely lost his self control and deliberately headbutted Kate” causing swelling to her head and bleeding to lips. Police were called

This is not the first time Giggs has been in the limelight for the wrong reasons. He also had an eight-year affair with his brother Rhodri’s wife, Natasha. The affair came into the spotlight in 2011 when Natasha gave an interview to the Sun.

In the interview, she would claim that he had aborted Ryan’s baby before marrying his brother. The affair started in 2003 and continued even after Natasha married Rhodri.