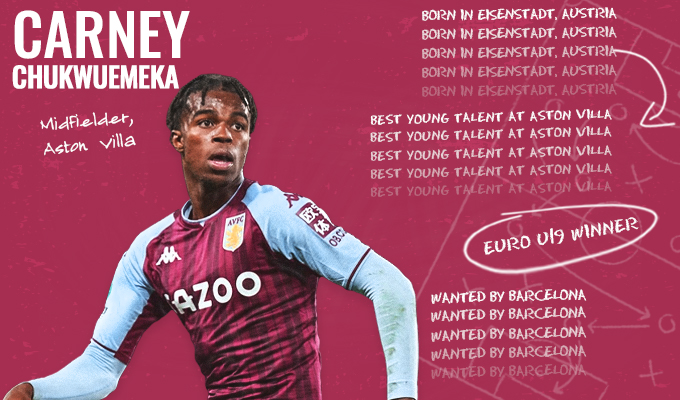 An international trophy winner with England? It cannot be! But it is the reality for Carney Chukwuemeka. While the senior men’s team huff and puff at every tournament, the latest Chelsea acquisition is a UEFA Euro U19 winner.

Moreover, 18-year-old Chukwuemeka has already played in the Premier League and is considered one of the best prospects in the country. Therefore, it is no surprise that The Blues were so heavily interested in him.

Chukwuemeka was partnered by Alfie Devine in England’s midfield, and the Spurs youngster is ready for the Premier League challenge

Barcelona were reported to be considering signing him. The likes of PSG were also interested as Luis Campos starts his revolution at the Parisiens. However, Chelsea stole a march on their rivals. Fabrizio Romano was the first to report that Chelsea are finalising a deal for the Aston Villa wonderkid.

While he has only had one full season at the top level, it was enough to make onlookers into fans. So, what is it about Chukwuemeka that has everyone excited? Well, the proof is in the pudding.

Carney Chukwuemeka is from the class of 2003 alongside another Barcelona target Alberto Moleiro, Malo Gusto, and Florian Wirtz. He was born in Austria and is of Nigerian heritage. Chukwuemeka grew up in Northampton and joined the city club’s academy.

Malo Gusto is Lyon’s next big star, and here’s why everyone is excited

In 2016, Chukwuemeka signed with Aston Villa, rapidly continuing his ascent. He mostly plays in the centre of the park, either as a box-to-box raider or a defensive screener. However, Gerrard has also used him on the left flank, though playing on the inside often.

Carney Chukwuemeka is our 𝟮𝟬𝟮𝟬/𝟮𝟭 Academy Player of the Season! ⭐ pic.twitter.com/v6MdtRDDCk

Chukwuemeka inked his first professional contract in 2020 and was the Academy Player of the Season for 2020-21. Villa handed him his senior debut in May 2021, with Chukwuemeka hitting the post.

However, his fortunes turned the very next day as Villa triumphed over Liverpool in the FA Youth Cup final. Internationally, Chukwuemeka made his debut with the U17s in 2019, before progressing to the U18s the following year.

Aaron Hickey is another rising star, for Scotland, who has signed for Brentford in 2022

It did not take long for him to make the leap to the U19s in 2021, and he has been a regular ever since. He was a vital piece as England won the 2022 UEFA Euro U19, scoring in the final against Israel.

However, Chukwuemeka can also represent Nigeria and Austria at the international level, so that decision is still up in the air.

Given that Chukwuemeka has only made 14 senior appearances, there is a lot of untapped potential in him. He is yet to score or assist in the Premier League, but the day is not far. However, a deeper dive in his stats already reveal a star in the making.

The Premier League fixtures for 2021-22 are out, and here is everything you need to know

Chukwuemeka averaged a pass success ratio of 81.7%, which crossed 90% over 15-30 yards. The fact that he is consistently able to find teammates is inspiring, and his team can trust him with the ball. Progressive passes is a key stat for measuring attacking contributions and Carney Chukwuemeka passes with flying colors.

Moreover, Chukwuemeka won 54.7% of his duels and completed 60% of his attempted dribbles. All of it points to a player extremely comfortable with the ball, and willing to battle opponents for it.

Carney Chukwuemeka at Euro U-19:

Chukwuemeka also regularly drives at opponents, which helps in transitioning quickly from defence to attack.

He has not been asked to do too much defensive work as Villa have other options. However, there is no doubt that a learning under new boss Thomas Tuchel will hone his skills in that department too.

There is a lot to like about Chukwuemeka, including his mentality and forward-thinking.

The fact that he has gelled with everyone is good news. Chukwuemeka is 6ft, but still retains a low centre of gravity. He is extremely hard to knock over when he has the ball, and loves spraying passes around.

Moreover, Villa’s 4-2-3-1 and 4-3-3 formations allow Chukwuemeka to play his natural game. There is also the matter of bringing that youthful confidence with him.

Chukwuemeka displays all the qualities of a veteran, but is not cocky on the field. He knows that there is a lot to learn, but football is all-consuming for him as he puts it himself,

“Football is always going around in my head. I’ll be analysing my performance whether that was in training or in a game. I’ll be thinking about the last session, thinking about what I could have done better and I’ll take that into the next session or next game.”

Chukwuemeka has shown an all-round vibe to his game that belies his age. However, that is not all. Chelsea are confident in his abilities, so he can expect to be a part of the first-team squad straightaway.

Aston Villa is not known for producing too many great players from its youth academy. Chukwuemeka is certainly their crown jewel in many years. Perhaps his mentality is best captured in his own words,

“I’d say, before every season I’m always setting myself goals and targets. I’ve done things like put my targets on my notes on my phone and saved that picture as my lock screen. Just doing that means that when I wake up in the morning and see that, I’ll look at myself and tell myself. I’ve got to keep working to get to where I want to go.”

The fact that he knows what is expected of him, playing in one of the toughest leagues, does not faze him. At the Euro U19, Chukwuemeka’s performances were off the charts, and he will be a leader soon. Unfortunately for Villa, that won’t come to fruition at their club.

Barcelona were tracking Chukwuemeka intensely, with a potential transfer on the cards. There is a full youth movement going on at Camp Nou, with Pedri, Gavi, Pablo Torre, and more.

However, Chelsea moved out of nowhere to complete the deal. Carney Chukwuemeka was never going to be at Aston Villa for long. Gerrard had already revealed that negotiations over a new contract have broken down. Chukwuemeka’s Aston Villa deal was set to expire in 2023, and he was going to be a very wanted player.

All that speculation is not put to rest. Chukwuemeka will now have the privilege of learning under the coaching maverick that is Thomas Tuchel. He will have Mason Mount and Raheem Sterling to learn from when it comes to the journey of a young England player.

While Chukwuemeka won’t be a first-team fixture, for now, sporadic contributions at Chelsea is a lot more lucrative future than contractual uncertainty at Aston Villa. Moreover, if he keeps his Euros form going, he might end up as a starter by the end of the season. That’s the kind of potential he has.