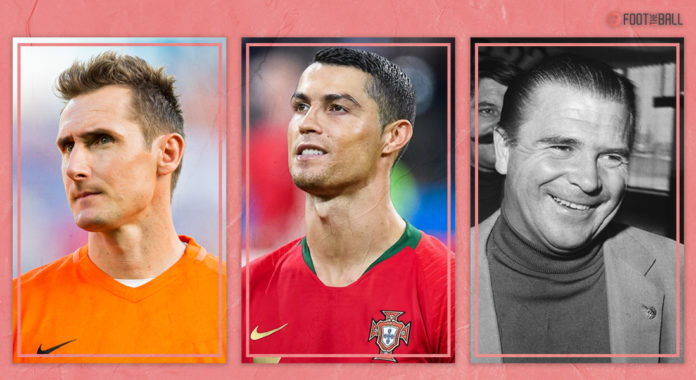 The men’s 2022 FIFA World Cup in Qatar is going to be a spectacle like no other. The first-ever wintertime World Cup, and in the Middle East too. There are air-conditioned stadiums in Qatar and some of the world’s biggest stars.

However, the main attraction of any World Cup is the matches. There are some juicy group-stage fixtures lined up, with teams raring to go. Fans are expecting to see a ton of goals and some thriller contests.

A full history of the FIFA World Cup is right here!

There have been some truly spectacular matches involving one nation absolutely mauling the other one. The lopsidedness of them aside, these fixtures have gone into the record books as a true goal scorer’s paradise. FootTheBall looks at the top 10 biggest wins in the history of the FIFA World Cup.

The ‘Mighty Magyars’ of the 1950s would have been mighty proud of this one. Hungary took apart the tiny Caribbean nation, becoming the only nation to score in double-digits in the World Cup’s history.

#OnThisDay the highest ever #WorldCup score (🔟-1⃣ ) was recorded in a game between 🇭🇺 Hungary and 🇸🇻 El Salvador.

Hungary were relentless, with substitute Laszlo Kiss netting a hat-trick. It remains the only treble from a substitute and the fastest hat-trick in any World Cup in just seven minutes.

Lazslo Fazekas score twice, but Hungary would exit at the group-stage itself after a 1-1 draw in their final match against Argentina.

The former regional powerhouse were facing Brazil, Scotland, and Zaire in the opening round. Having played out a draw against the other two teams, Yugoslavia absolutely demolished the African first-timers.

They had scored six times in the first half itself, a record that still stands. Dusan Bazevic grabbed a hat-trick, while Zaire even substituted their goalkeeper but to no avail.

The 9-0 win saw Yugoslavia progress as group-winners, but they would crash out in the next round after losing all three matches.

The Mighty Magyars in all their glory as they remain one of the most dominant nations in any edition of the FIFA World Cup. Hungary had a litany of superstars led by the mercurial Ferenc Puskas.

🇭🇺 Hungary tore up the #WorldCup record books in 1954 with their groundbreaking style and dazzling attack of Hidegkuti, Kocsis & Puskas 🤩 pic.twitter.com/0NJ9ytgmFh

The Real Madrid stalwart netted a brace, but it was Sandor Kocsis who stole the show. A hat-trick against the Koreans was followed by another one against West Germany in a 8-3 win. Hungary were the favourites for winning it all, and were only stopped by the Germans in the ‘Miracle of Bern.’

Nevertheless, they still hold the records of most goals scored at a single edition and the best goal difference.

The winners of the inaugural FIFA World Cup played only four games to lift the trophy again. After a slew of withdrawals, Uruguay and Bolivia were paired in Group 4 with the winner going through to the finals round.

The eventual champions hammered their South American neighbours, with Oscar Miguez scoring a treble. Uruguay would be drawn against hosts Brazil, Spain, and Sweden in the next stage.

The Selecao were heavy favourites in the final against Uruguay, but goals from Juan Schiaffino and Alcides Ghiggia caused the Maracanazo.

Back when there was no group-stage, nations were thrown right into the thick of knockout football. Sweden and Cuba squared off in the quarter-finals, with the Scandinavian nation coming out victors easily.

Gustav Wetterstrom and Harry Andersson each scored a hat-trick, and it remains the only instance of two players achieving this feat in one match. Sweden would make it all the way to the third-place playoff match, before losing to Brazil.

The biggest win since the turn of the millennium, Germany ran over Saudi Arabia in the first match of the group-stage. Die Mannschaft were led by a debutant in Miroslav Klose with a hat-trick of headers.

He is only one of the two players to achieve that feat, and would go on to become the leading scorer in World Cup history. Germany were not fancied for winning it all, but they made it to the final against Brazil.

Only 2% of Germans believed a #WorldCup win was even possible, but belief grew significantly with a record-breaking 8-0 win over Saudi Arabia to kick off the campaign 🙌#DieMannschaft pic.twitter.com/fjN41lAJmF

The runners-up in 1998 were looking for revenge, and came out on top in a 2-0 win over Germany.

The same edition where Yugoslavia blew away Zaire, the Poles took apart another debutant in Haiti. Andrzej Szarmach scored a hat-trick, while Grzegorz Lato got a brace.

Lato would end up winning the Golden Boot, as Poland finished third after defeating Brazil through a goal from Lato. Moreover, they had also knocked out Yugoslavia in the second round.

Four years on from scoring eight, Uruguay smashed seven past the Tartan Army. Carlos Borges scored a hat-trick, while Oscar Miguez got a brace.

Scotland finished bottom of the group with no points while Uruguay progressed as winners. They would be defeated by the ‘Mighty Magyars’ in the semis, before losing to Austria in the third-place playoff.

The Selecao’s biggest-ever World Cup win as another debutant was put to the sword. Portugal had six different scorers on the night, with Tiago Mendes scoring a brace.

Portugal are among the favourites for the 2022 FIFA World Cup, and here are the others

North Korea had a miserable campaign, shipping 11 games and finishing bottom of their group with no points. On the other hand, Portugal were knocked out by Spain in the round-of-16 as La Roja would eventually end up winning the World Cup.

The same day Hungary thrashed West Germany 8-3, Turkey were smacking the Asian powerhouse for seven. Burhan Sargun scored a treble, while Suat Mamat got a brace.

However, the tournament as a whole was a dampener for Turkey. They would lost their final group match against West Germany by 7-2. Turkey and South Korea both failed to make it out of the group stage.