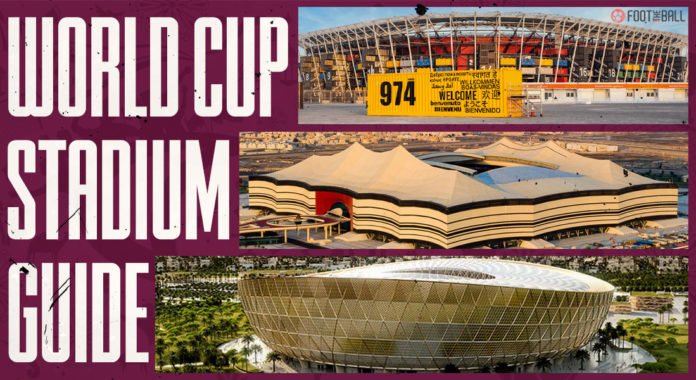 There are several fascinating aspects of the 2022 FIFA World Cup in Qatar. Apart from being the first World Cup played in the European winter, the stadiums are a marvel in themselves. All eight stadiums are situated within a 43-mile radius, meaning traveling will never become an issue.

The #FIFAWorldCup inches closer, and Qatar is ready to live all the emotions of the greatest football event in the world. ⚽ #NowIsAll #Qatar2022 pic.twitter.com/uTtaPFiKo0

However, the craziest thing about all the venues is that seven out of the eight stadiums did not exist before Qatar were selected as the host. That is correct.

The Middle Eastern nation has built seven stadiums from scratch, though almost all of them will be dismantled in some capacity after the tournament is over. Therefore, it is a given that all the stadiums will have state-of-the-art facilities.

Moreover, there are also solar panel farms and air-conditioning inside the stadium. However, there have several documented migrant deaths during the construction of the stadiums, which have caused some nations to speak out against Qatar.

Given how the stadiums have only been in existence for a few years, FootTheBall presents a full guide to all eight stadiums.

The only stadium that will become a home ground for a professional football club. It has a full capacity of 40,000 and is slated to host seven matches till the round of 16. Moreover, there was an old stadium in its place, which was torn down and the materials reused or recycled.

It has a brightly lit, multicolored façade that represents the various shades of Qatar. Like all the stadiums, it will have its capacity decreased. However, Al Rayyan will move into the stadium, which will have a future capacity of 20,000.

Something you cannot miss out on! Schedule for FIFA World Cup 2022

If the name sounds interesting, there is a sound reason behind it. The stadium is situated amid several universities, literally making the area “educational.” Furthermore, with a full capacity of 40,000 and an advanced air-conditioning system, the stadium is out in the desert.

The outer structure has a diamond shape, that reflects sunlight in many colors. Its capacity will be brought down to 20,000 after the World Cup. The stadium has hosted the 2021 FIFA Club World Cup Final, won by Chelsea. It has gotten eight matches, till the quarter-final stage.

It was the first stadium completed in 2019. Once again, this stadium has an advanced cooling system. Its design is inspired by the design of dhow boat sails. It has a capacity of 40,000 and will see action from seven matches. Al Janoub was the venue of the 2020 Asian Champions League final. The capacity will be halved after the World Cup.

And it is looking 👌 pic.twitter.com/qmxkbFfLlM

The host for the opening match between the Netherlands and Senegal, along with seven more. It can hold up to 60,000 people. Al Bayt has a tent-like structure overhead, inspired by the Bayt al sha’ar tents used by the nomads.

Additionally, the stadium has a retractable roof, which combined with the roof, will keep the inside cool.  However, it is the most far-flung stadium from Doha and will have its upper-tier seats given to developing nations. Moreover, in its place, a five-star hotel and shopping complex will be built.

A capacity of 40,000 will drop to half, replaced by a mosque and hotel. Al Thumama will host eight matches, up to the quarters. Moreover, the stadium is named after a local tree, and its design is inspired by the ‘gahfiya,’ which is an Arabic hat.

The most unique of stadiums among all eight for the World Cup. The stadium has been constructed from 974 shipping containers and modular steel. Therefore, the name was pretty much a given.

Stadium 974 in Qatar is the world's first transportable football arena.

It's made from repurposed shipping containers and can be completely dismantled, transported to another country and put back together like Lego 🤯 pic.twitter.com/tILD0bhftt

However, it did have a former name Ras Abou Aboud Stadium. It has a 40,000 capacity and will host seven matches. Needless to say, after the World Cup, the entire stadium will be dismantled. The containers will be used for other activities, while the stadium complex will become a waterfront site.

The only stadium that was present in Qatar, was built in 1976. It was heavily remodeled in 2017 and will host eight matches till the third-place playoff. The stadium has a capacity of more than 40,000. It has previously hosted the World Athletic Championships and the FIFA Club World Cup final in 2019. Moreover, this is the sole stadium that will not be dismantled or have its capacity reduced.

Khalifa International Stadium will host the Emir Cup final on Friday! This is the first #Qatar2022 stadium to be completed! 🇶🇦⚽️🏆 pic.twitter.com/nySydyP5Z2

The largest stadium with a maximum capacity of 80,000. The Lusail Stadium will hold the most matches (10), including the final.

Lusail Stadium makes ready for its date with destiny: The FIFA World Cup Final™. See the progress of this amazing venue. #Qatar2022

Additionally, this was the final stadium to open and will be the main attraction for a future city of the same name. Therefore, the stadium’s seats will be removed and sent to developing nations.

Moreover, the area will be redeveloped into schools, hospitals, and other sporting facilities. The upper-tier seats will get turned into terraces for the upcoming homes. One of the best stadiums in the history of the World Cup.