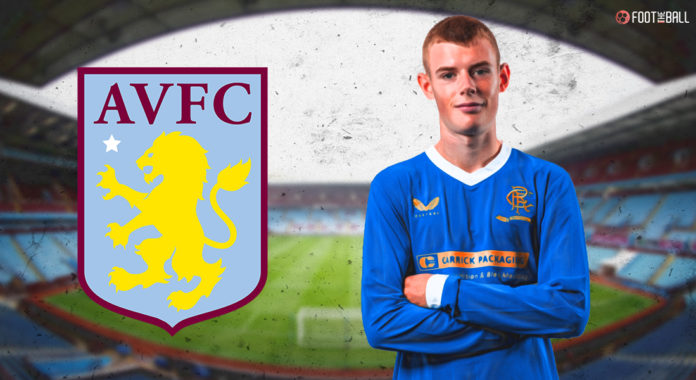 It has been a season of underachievement for Aston Villa under Steven Gerrard. The Lions finished 14th in the league with 13 wins, six draws and 19 losses. Before the start of the season, with the squad they had, they were looking for a finish in the top ten at least. Though their record improved marginally after the arrival of Phillipe Coutinho, it was not enough to salvage their season. However, the people at Villa Park are already planning for the future by signing talented 16-year-old Rory Wilson from Rangers.

The youngster who had a fantastic season at the youth level was on the radars of various clubs. But it was the former Rangers, manager Gerrard whose club managed to snap him up.

Gerrard, who managed Rangers for three years, made the team a scoring powerhouse in Europe. The former Liverpool captain also won the club their first title in 10 years. And now he will be hoping that the prodigy from his former club does the same for Villa.

The Scottish striker is currently one of the hottest talents in Europe. With his signing, Villa have finally secured themselves a talented player for the future.

So, who is the new Villa youngster?

Who is Rory Wilson?

Rory Wilson was born in the east-coast Scottish town of Girvan. After joining the Rangers academy, he made his way through the youth levels to the under-19s. The forward came to light last season when he went on a brilliant scoring streak. The teenager was the club’s highest-scoring player and shone for his nation at the under-17 level.

Rory Wilson (2006 🏴󠁧󠁢󠁳󠁣󠁴󠁿) to Aston Villa confirmed by the player.

Scotland under-17 coach Brian Mcloughlin has hailed Wilson as one of the best young players in Europe on current form. “Young Rory’s strike rate and the number of times he hits the target – he’s up there with the best in Europe,” he said.

Brazil has a history of producing world-class talents. The newest entry to the list is Endrick Felipe.

The performances that he has produced this season show that he has a high ceiling. The striker has repeatedly proved his credentials, not only for the country but also for the club. He has also shown that he can shine at one of the top clubs in Scotland, which shows his ability to handle pressure.

Wilson also put in a Man of the Match performance in the final for his team as they won the Scottish Youth Cup, showing that he can handle the pressure of the big matches.

And a move to Aston Villa signals that he is ready to take his talent a level above.

With 49 goals to his name, Rory Wilson had a season to remember. The player was also instrumental for the club in the UEFA Youth League, helping them reach the playoffs. He also is quite good in the air, with 2.6 aerial challenges per 90 minutes.

He also likes to get on the end of the ball to put the finishing touch, as evident by his many goals in the last season.

I love the first goal he scores here. Great knowledge of the line,turns on the after burners and points exactly where he wants it:#AVFC #RoryWilson pic.twitter.com/AJjKajmvLU

However, he needs to refine his game as he is not involved much in the buildup play.

As mentioned earlier, Wilson is a true poacher getting on the end of the ball, scoring and just being a threat in the attacking third. However, he averages one key pass in seven games and one recovery, roughly three matches, stats which prove that he still has a lot to learn.

The Man of the Match in tonight's Scottish Youth Cup Final was Rangers' Rory Wilson 👏 pic.twitter.com/0ZnRfDxjIP

This means that he is not a multi-dimensional forward yet. However, he is only 16, and if he keeps his scoring standards high and improves his buildup play, Wilson can be a generational talent.

With his transfer to Villa, Wilson will be experiencing a massive rise in the level of play. He will also compete at a higher level where he can further hone his skills. In addition, if he keeps delivering good performances at Villa for a season or two, a senior call-up could also come his way.

The Rangers youth academy proved their credentials when they sold Billy Gilmour to Chelsea. Gilmour also transitioned from the Chelsea youth side to the first team, becoming one of the top young players. The folks at Villa park will be hoping that Wilson takes that route as well, albeit a little quicker than the Chelsea man.