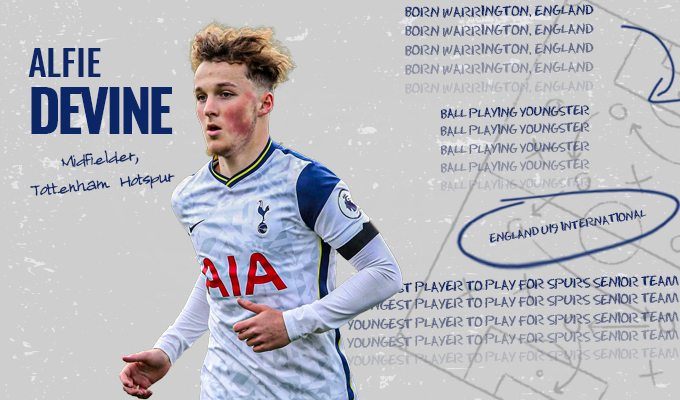 Spurs are having a rollercoaster of a season. A major win is followed by a poor loss. Antonio Conte is trying his best to uplift the squad but it is not easy. The midfield often looks overrun and could use more fresh legs towards end of matches. This is where Alfie Devine can come in.

Arguably the most talented player in Spurs’ youth ranks, Devine has been shining with the U23s this season. The craziest thing about all of this is that Devine is just 17-years-old.

Yes, Alfie Devine is playing six years higher than his age group. This is the kind of thing that has supporters buzzing about the future. Devine has found chances hard to come by this season though that might be changing soon. Conte named Devine in the matchday squads against Leeds and Middlesbrough recently.

It is clear that the club sees Devine as a major investment that will pay off spectacularly. The early signs have certainly been promising and more chances will only lead to more exciting displays.

Alfie Devine is from the class of 2004 that boasts several rising ballers already. Alejandro Garnacho, Lesley Ugochukwu and of course, Gavi have all been making waves across Europe. Devine started his footballing journey with Liverpool, near his birth place of Warrington.

The Reds released him in 2015 and Devine joined Wigan Athletic four months later. The Latics were floored by his potential and game play which led to Devine making his U23 debut in 2019.

Ironically, it was in a defeat of Spurs in the FA Youth Cup before Devine started the following match against Manchester United. Moreover, Devine was adjudged Player of the Tournament at the SportChain AGS Cup for England U16s in December 2019.

Wigan signed Devine to the first-team in June 2020 before having to sell him within a month due to falling into administration woes. Spurs were the lucky party, paying £300,000, for Devine’s services.

The 16-year-old linked up with the U18s and the U23s, continuing to show the promise he had exhibited with Wigan. Devin scored two goals each for the two teams during 2020-21 and there were a few notable highlights during the season. When Chelsea U23s played Spurs, Devine got into an altercation with Danny Drinkwater in 2020 that went viral on social media.

However, Devine’s moment under the sun came in January 2021. In the third round fixture of the FA Cup against Marine, then-manager Jose Mourinho handed Devine his senior team debut. At just 16 years and 163 days, he became the youngest player in Spurs’ professional history. The night got even better for Devine when he scored his first senior goal, collecting the ball inside the penalty box before rifling home a smart near-post finish.

Devine was recently called up to the England U19 squad where he is now a regular.

Devine’s lack of game time at the senior level this season has not dulled his impact on the youth team. The attacking midfielder has racked up 12 goal contributions (nine goals, three assists) in Premier League 2. Furthermore, Devine has also scored twice in three appearances in the FA Youth Cup. There is a lot of things to love about Devine including his brashness and confidence in himself.

Congratulations to Tottenham youngster Alfie Devine, who captained England U19 yesterday against Germany U19. #THFC pic.twitter.com/UZcfR7IOJZ

“He’s a kid with good potential. He’s basically a midfield player but with an instinct to appear in finishing zones and to score goals,” said Mourinho after the Marine game. That last sentence reveals a lot about how Devine likes to operate. Though he is a midfielder by trade, he has a clear eye for goal and loves to get forward.

Devine knows that he has the capabilities for scoring and wants to prove it. In the game against Marine, he had 95% passing accuracy and 50% tackle accuracy (1/2). Devine made his U19 debut with England last September and has made four more appearances. Spurs’ U23s are a perennially underachieving side but Devine is a standout member.

Alfie Devine’s game by numbers for Tottenham against Marine:

One for the future. pic.twitter.com/L4GnXc7Pnf

Devine scored a brilliantly taken solo goal against Arsenal U23s just a few weeks ago. He picked the ball up near the centre line and drove at the defence before opening his body up to finish superbly. It brought to mind Japhet Tanganga’s words from last year.

“You saw glimpses of his ability in a really professional performance. I’m really happy for him to get his first professional goal. He’s a really good player and there’s more to come as well,” the young defender had observed.

Alfie Devine has a lot of potential that is already on show. He has been training a lot with the first-team and even the senior pros are impressed. “He came to us and had been a centre-forward at Liverpool but we noticed he had the quality to link play between the back and front,” Gregor Rioch, Wigan’s academy team manager said.

“His possession stats are very high and he passes the ball forwards, rather than sideways and backwards. He can play holding midfielder and link play up, he can also break forward from midfield with and without the ball and grab a goal.”

Every coach who has observed Devine has spoken glowingly of his style and abilities. Wigan’s former technical director Peter Reid has emphasized on Devine having “a bit of everything. He could handle the ball, hold off defenders, he had that determination.”

The hope for Spurs is that Devine can have a Christian Eriksen/Dele Alli-type impact. Furthermore, the fact that he is a home-grown player will also save the club a sizable transfer fee for a new recruit.

For starters, the number of ways he can impact a match and positions he can excel in. Devine can play either as a free-roaming number 8 or a playmaking number 10. He is good at receiving the ball and turning quickly to find teammates alongside playing raking long balls.

Spurs are relying on Harry Kane to drop deep and play in this sort of position, given Alli’s fall from stardom. Who plays directly behind the frontline has been a major problem for Spurs, one that Devine can solve. He has shown already how his creative juices flow during all periods of a match.

Devine is full of exuberant energy which can be a real asset for Spurs and help instill some much needed belief.

The supporters are full of support for the club to develop youngsters more and more. If Devine can keep his form up, he can become a bonafide star for years to come.

The plan for Devine is to slowly ease him into the senior team mix from the bench. Spurs are not looking to loan him out as of now. Conte likes what he sees in the youngsters like Devine, Dane Scarlett, and Harvey White. Spurs are keen to register Devine as a ‘club-trained player,’ which needs a minimum tenure of 36 months.

This is why the 17-year-old was unable to be registered for the European squads over the past two seasons. However, the recent promotion to the first-team bench is another indication of how closely Conte is watching. Furthermore, it is not like Devine will not find an ideal place in the Italian’s system. Harry Winks has been a middling player ever since the departure of Mauricio Pochettino.

Oliver Skipp is in the mold of Pierre Emile Hojbjerg but far inferior. Spurs are lacking a playmaker who can connect the zones across the pitch on a regular basis. Devine can be the wildcard answer for the next season and it will not be any surprise if Conte does give him time in the remaining games as well.