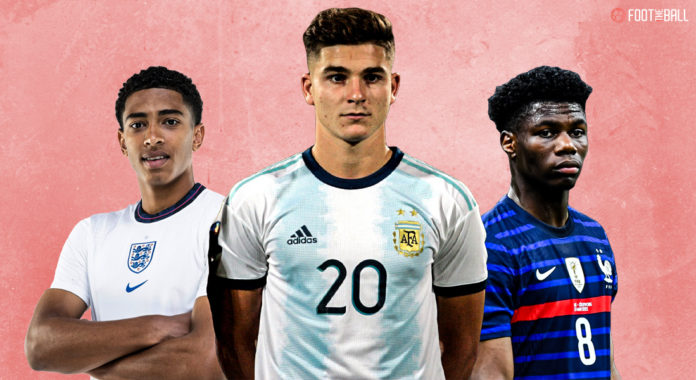 Over the years, the World Cup has served as the launchpad for several young careers, from a 17-year-old Pele in 1958 to Kylian Mbappe’s role in France’s victory in 2018. Here, we’ve chosen 6 up-and-coming athletes who might make their debut at Qatar 2022 this winter.

Alvarez, one of the most promising young forwards from South America, has officially joined Manchester City in the English Premier League. He grabbed Pep Guardiola’s attention at River Plate due to his instinctual finishing and technical prowess. Julian Alvarez should make it to the next World Cup for Argentina if his stats are anything to go by. Soccer fans at Betway’s sports betting Tanzania site are eager for the Qatar finals, which could be Lionel Messi’s final in Argentina colors.

You all will be well-versed in Aurélien Tchouaméni. He is no longer a hidden talent; during the past two seasons, he has rapidly risen to become one of Ligue 1’s most talked-about players and now will be wearing the Real Madrid shirt next season.

Another rising star from South America is Matias Arezo, also known as “the buffalo”, who many consider to be Luis Suarez’s natural heir. He has a lot of goals under his belt despite his young age and is powerfully built, thus the moniker. He might be one of the tournament’s breakthrough stars. Many top teams are keeping an eye on Arezo, who turns out for Granada in Spain.

The Dutch national team benefits from Jurrien Timber’s flexibility and excellence. Timber now appears to be a lock to play a significant part for the Netherlands in Qatar, the same way he did at the Euros after his breakout season with Ajax. Timber is capable of playing well in two- and three-man defenses and as a right-back.

Timber is a great transition defender since he is an athletic centre-back. He has more difficulty man-marking, giving attackers more room than is necessary given his physical attributes.

On the field, he is a diligent player willing to yield to superior players or step up when necessary.

Karim Adeyemi of Germany is another forward who made a breakthrough in Salzburg in the Austrian top flight. Adeyemi is a strong attacker with seamless acceleration, which saw him score in his national team debut. Adeyemi was born in Nigeria to parents of Nigerian and Romanian descent.

The #FinalDraw is live! The Official Mascot of the 2022 World Cup is released, presenting – La'eeb

Follow this thread for all the latest updates from the draw!#FIFAWorldCup pic.twitter.com/qoAoBxXxvI

Germany are out to redeem themselves after a disastrous Euros campaign in which they fell short against England at Wembley and will look to top performances from Adeyemi and co.

Bellingham plays club football in Germany for Borussia Dortmund and has significantly impacted the Bundesliga. Bellingham, a Stourbridge native who began his career at Birmingham City, is a player in Gareth Southgate’s plans. He has already shown that he is unfazed by the big stage. With Phil Foden, he might potentially excel in Qatar 2022 for an England team that reached the semi-finals in Russia in 2018 and went further to reach the Euro 2020 finals.

The list for the youngsters to look out for is long, and the World Cup could present us with even more names we haven’t paid attention to. It promises to be a competitive tournament, and Betway betting fans can start making their wagers at their favourite website.