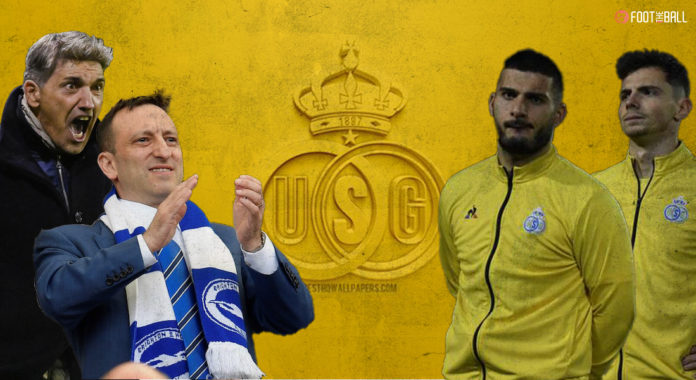 When someone talks about the Belgian first division- the Jupiler Pro league, the clubs that are often mentioned in that conversation are the ‘Big 3’ – Anderlecht, Club Brugge and Standard Liege. Ardent football fans would even mention the likes of Genk and Gent due to their recent success. The one club people tend to forget about is Royale Union Saint-Gilloise (Union or USG for short), and no one can blame them.

*Updated* Teams with most league titles in Europe 🙌

Having come close to winning a historic Belgian league title last season, they’ve shown this season that it was no fluke. The upstarts are right up there in the league again and have gone one better, bossing the Europa League ahead of Braga, Union Berlin and Malmo in their group.

Union Saint-Gilloise finished second last season and yet until this season, very few fans of European football had paid any attention to the ‘other’ side from Brussels.

Union have been THE underdog story in European football that garners every football fan’s attention.

After a 48-year absence from the first division of Belgian football, USG returned to the top tier in the 2021/22 season with optimism but little did they know that they would be sitting on top of the Pro league with only 9 games to go and 10 points clear of Royal Antwerp, who surprisingly sat second themselves. Union looked well set to win their 12th league title, their first since 1935! That dream remained a dream as Belgian League’s playoff system meant their lead was cut to half and momentum was lost.

Their miraculous return to the top Belgian football is very similar to that of Leicester’s fairytale season, where they defied the odds to win the Premier League and gave football fans one of the most memorable moments ever.

History And Fall Of A Giant

Royale Union Saint-Gilloise was founded in 1897. The first of their 11 titles came way back in 1904, which started an era of dominance for them in Belgian football. They won a possible 7 league titles in the next 10 seasons, finishing 2nd the other three times. In fact, they had never finished outside the top 4 from 1902 to 1926.

They only won one league title in the 1920s- in 1923, but in the early 1930s, they dominated the Belgian top flight again till 1935, winning 3 consecutive titles. Ironically during this era, the Union’s fans referred to Anderlecht as an ‘elevator club’ as they were never able to maintain their top-flight status consistently.

From 1930 to 1935 USG played 60 games in which they were undefeated, setting a record in the Belgian top flight that stands to date.

Union were also the 3-time champion of the Challenge International du Nord which was a precursor of the European Cup which eventually became the Champions League. When Belgium made their appearance at the 1934 world cup in Italy, five players from that squad played their club football for Union.

Despite having such an illustrious history, the club faced a gradual decline till the 1960s and drifted into complete obscurity from then on. They reached their last major semi-final in 1960, when they played against AS Roma in the Inter city-fairs cup.

In 1963 they hit a new low as they were relegated to the 2nd division of Belgian football for the first time. This started their almost half a century absence from the first division.

They oscillated between the lower leagues and even slipped into the fourth division for a number of years after that.

But in May of 2018 everything changed as a revolution was taking shape in Brussels.

A revolution In Belgium

In 2018, when their then-German owner had put the club up for sale, Tony Bloom swooped in and bought the club along with his business partner Alex Muzio. USG’s fortunes were about to change.

Tony Bloom, who is also the chairman and owner of Brighton and Hove Albion, set out to restore the Belgian giant back to its former glory.

One of our #UnionBhoys went to #Brighton & met a @OfficialBHAFC. They switched scarves and last weekend he made a picture with Tony Bloom wearing it!
Nice story! That's why we also love football! #unionsgfamily pic.twitter.com/HxY4SKlt46

Bloom and Muzio bought Union when they were in the 2nd division and their short-term goal was to make it to the Jupiler Pro league.

Bloom, a lifelong Brighton fan, took over at the Seagulls when they were down in the dumps.

Brighton aren't the only team succeeding under Tony Bloom's ownership. Royale Union St-Gilloise are currently top of the Belgian Pro League after 11 games, despite it being their first season back in the top tier.

His data-driven and analytics approach transformed Brighton from a middling club in League 1 to one of the most effectively run clubs in the Premier League. He took the East Sussex side from a rundown Athletic stadium to a brand new multipurpose state-of-the-art Amex stadium which has become a constant in the Premier League.

But after injecting 360 million pounds of his own money into Brighton over the years, Bloom wanted more. He and his business partner Muzio were looking to buy a club outside of the UK that could win trophies but somewhere they could get to by road and was a maximum of 3 hours away from the UK.

So they turned their attention to the Eredivisie and the Pro League. Finally, in 2018 they saw the potential in the project at Union.

At this point, Muzio was overseeing the day-to-day operations of the club. He appointed Chris O’Loughlin in 2019 as the sporting director and things started to change.

In 2020 the youthful management team of USG consisting of Bloom, Muzio and O’Loughlin bought in Felice Mazzu, who had been out of a job for 6 months after he was sacked by Gent mid-way through the previous season.

The man behind the succes of Royale Union Saint-Galloise:

Mazzu, who was hesitant about the project, took the chance to prove his doubters wrong after his failed stint at Gent. Together they were ready to transform Union and so they did. Mazzu got them promoted instantly and since then they have not looked back.

Whilst Union’s scouting network was broad under the guidance of their youthful management, they started using data and analytics to recruit talented young players from big clubs that are deemed surplus to requirements and exceptionally talented young players from lower leagues across Europe. Their scouts usually scout the players they want to sign for no less than 10 months.

The emphasis on psychological aspects is paramount to their success also, as O’Loughlin stated that their scouts look for players that have overcome adversities time and time again because in football it is pretty much the same whether you are on the pitch or off it.

This approach has yielded some brilliant results for the Brussels side as they have barely spent any money on transfers over the last two campaigns picking up most of their current squad for free! Union has unearthed some gems in the process who are starring for them this season.

Union’s squad is littered with players who have revived their careers in Belgium. The three stand-out names and certainly the stars for Union have been Deniz Undav, Dante Vanezir and Christian Burgess.

Deniz Undav and Dante Vanezir became the deadliest strike partnership in Belgium this season. They combined to score more than 50 goals for the club last seaosn. They both also have followed a very unique path to the top.

Undav was signed on a free transfer from FC Meppen in the summer of 2020 and became a goal-scoring machine in Mazzu’s squad. Despite being overlooked, USG took a punt on the then-23 German forward who has repaid the club’s faith in him many times back. He earned himself a “Promotion” in Tony Bloom’s stable of clubs this season, moving to Brighton in the PL.

The story of Vanezir is slightly more unique. He was part of Mazzu’s Gent squad as a 20-year-old but was unable to break into the first team. After the Belgian coach was appointed USG coach he looked to reunite with the nifty forward so that he will be able to nurture the potential he saw in him. This made sure Vanezir was one of his first signings and since then has played a crucial role for Les Unionistes since joining.

The 23-year-old’s performances have been so majestic that the Belgian national team squad even called him up by Roberto Martinez, a momentous occasion for the young attacker which he shared with his entire USG squad who celebrated it like a trophy.

Christian Burgess’ path to Belgium is even more strange. The then 29-year-old central defender had just won the player of the season for Portsmouth in 2020.

How it started ➡️ How it’s going

First day for RUSG trying to figure out whether this small leap of faith had been the right decision. Fast forward 8 months and the picture says it all. Good things happen outside of your comfort zone and I’m not finished yet! #AllezUnion 💙💛 pic.twitter.com/Ooacjwoknr

They failed to renew his contract at the end of that very season and Union swooped in to sign him with little competition. He went on to become the defensive bedrock of the team that came so close to winning it all.

This combination of youth and experience in the squad has given the squad a lot of character.

Some other architects of their rise include Kaoru Mitoma and Casper Nielsen who were also been in fine form last season making sure that even if the deadly duo of Vanezir and Undav fail to produce they always somehow manage to come up with the goods.

Royan Union-Saint Gilloise missed out on a dream league title last season but they have proved that they are here to stay.

They’ve bested every team in their group so far this season, and with many illustrious opponents in the Europa League, Union Saint Gilloise will be the one team on the radar for the upset watch. If they keep up this form for a couple of years, the “Big 3” in Belgium will soon become the “Fabulous Four”. All this was achieved by being one of the smartest clubs in Europe.