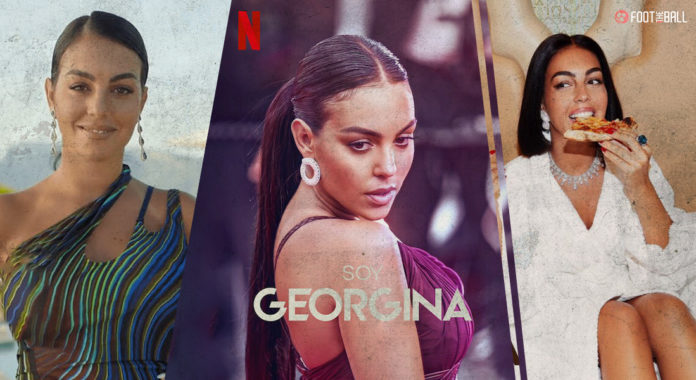 There’s a good chance you’re familiar with Cristiano Ronaldo – the soccer superstar has played for some of the world’s top clubs in Manchester United, Real Madrid and Juventus, and is the single most-followed account on Instagram, with nearly 400 million followers. He’s a global brand without comparison, and anyone who enters his orbit becomes a celebrity in their own right. That’s certainly true of Georgina Rodriguez, an Argentine model and Ronaldo’s partner. I Am Georgina shifts the spotlight to her, following her travels, family, shopping and home life, with ample guest appearances by Ronaldo himself.

Someone as high profile as Cristiano Ronaldo sharing his life and probably being more personal and authentic here than in his interviews is definitely watchable, although the majority of the audiences will watch this for him, and maybe him only.

There is no mention of the rape allegations made against him in 2005 and 2009, which were later withdrawn; nor of tensions in her family amid claims from relatives the model has shut them out. So the show feels a little airbrushed and clearly made to showcase their seemingly perfect life.

While football fans always hear a lot about Cristiano Ronaldo, this time it is all about the lady of the house. Here is everything you need to know about this new documentary about Georgina. The cast, reviews, streaming details and much more.

Georgina Rodriguez might not be a household name for most American viewers, but as the partner of one of the world’s most famous people, she’s more than exceeded the standard credentialing process for a prospective reality television star. Heck, if viewers can have a show about real housewives in Salt Lake City, then there’s plenty of room for someone attached to a global brand like that of Cristiano Ronaldo.

She has 30 million followers, is a mother, a businesswoman, and her partner @Cristiano Ronaldo is one of the world's most famous men — but do you know the real Georgina Rodríguez?

The in-depth docuseries I Am Georgina is now on Netflix pic.twitter.com/tDwICLN7DU

Georgina Rodriguez is often seen linking arms or by the side of superstar footballer boyfriend Cristiano Ronaldo. But now the Spanish model will get to tell her own story in her new Netflix show ‘I am Georgina’ – which is streaming now.

Now a huge name with a massive following on social media, Georgina’s life with Ronaldo will be chronicled in the six-episode series. Georgina now lives in Manchester with Ronaldo, with the 36-year-old having re-joined the club he left in 2009 last summer.

The couple met whilst Georgina was working as a sales assistant and it was love at first sight. “I’d get there on the bus and leave in a Bugatti,” says Georgina, but the relationship ended up costing the sales assistant her job.

What is ‘I Am Georgina’?

Cristiano Ronaldo is one of the top soccer players in the world, and consequently one of the best of all time. In I Am Georgina, a new reality series imported for American audiences by Netflix, more was shown about the face most often seen beside him – that of Georgina Rodriguez, a model, influencer and partner to the superstar. She walks audiences through her daily life, a Cinderella story of glitz, glamour and world travel.

The hit show follows Georgina as she details how her life has changed since meeting Cristiano. With more than 28 million followers on Instagram, the now-reality show star is a model, businesswoman, dancer, influencer, and mother to three children.

The Netflix original’s first season consists of six episodes, each of approximately 40 minutes. With its audio in Spanish, its official synopsis reads,

“Join Georgina Rodríguez — mom, influencer, businesswoman, and Cristiano Ronaldo’s partner — in this emotional and in-depth portrait of her daily life.”

Through the six episodes, the Spanish model takes us on her journey and how her life has changed in the past 5 years. We get to see behind the glitz, glamour, and red carpets and for all Ronaldo fans out there, he is in the show. This is almost a rags to riches scenario, how she went from selling the designer clothes to wearing them, and hey, if you’ve got it, flaunt it.

There is a trend for famous people to allow series to be made about their “everyday life” and a want for the average person to watch it. It can be great escapism and good for self-reflection watching other real people.

Georgina plays a variety of different roles in her life, and does it with style and accuracy. While her followers sure know certain aspects of Georgina’s life through her social media, this series takes us closer to her as a person.

The documentary series is all about the life and journey of Georgina Rodriguez. It tells us how she went from living in a small town to now living in one of the most luxurious houses on the planet. The series portrays her in all the roles she plays in her life—a mother, an influencer, a model, an entrepreneur, and of course, life partner of Ronaldo.

Fans get a very close look at the lives of the celebrity couple. The series features their homes in Madrid and Italy, and also their private yachts, showing us how luxurious and extravagant their life is.

Georgina refers to the difficult times she had to endure when she was younger. She also refers to the tainted personal relationships she has lived through. But that’s where it stops. We don’t see her paving the way, in hardship and turmoil.

When does ‘I am Georgina’ air?

The brand-new show, which is also set to feature Ronaldo, was released on Thursday, January 27 2022 across the world.

“I am Georgina is what is behind the covers, the stories and the red carpets,” Rodriguez wrote on Instagram.

“Georgina is totally honest and recognises in the documentary her life changed from having nothing to ­absolutely everything,” Netflix Spain Director Alvaro Diaz said.

How can I watch ‘I am Georgina’?

I Am Georgina landed on Netflix on Thursday, and viewers already have plenty to say about the new documentary series that looks at the life of Georgina Rodriguez, Cristiano Ronaldo’s partner.

I am Georgina will be available in its entirety on Netflix. The streaming site picked up the rights to the series last year and are set to make huge amounts of revenue off the back of its impending success.

The series is all about Georgina and her life, so there are only a handful of people you will see in this Netflix title, namely – Georgina Rodriguez, Cristiano Ronaldo, and Ivana Rodriguez.

‘I am Georgina’ reviews

The reviews of the series have been rather mixed. People liked Georgina’s inspiring story, but the lavish lifestyle shown in the show seems a bit too much.

It’s through no fault of Georgina Rodriguez, then, that I Am Georgina falls a bit flat. She’s perfectly charming on-screen in a medium where likability isn’t always a given. She shows obvious affection for Ronaldo, and he displays it back in his own interviews.

However, viewers were a little less sure, with one posting: “I’m honestly trying to understand the point of the show but I’m not getting it. She’s a very lucky woman and her life is fabulous, so if this is what she’s decided to do why not, money isn’t a problem for her. Must be nice.”

There’s plenty of sex appeal in the show – shots of Georgina posing for Instagram photos and the like – but nothing scandalous, salacious or censor-worthy.

‘I Am Georgina’ is a perfectly serviceable reality show, but if you’re not already a big fan of Rodriguez and Ronaldo, there’s not much to draw you in, and the Spanish-to-English dubbing likely mutes much of the personality you might expect from reality stars.