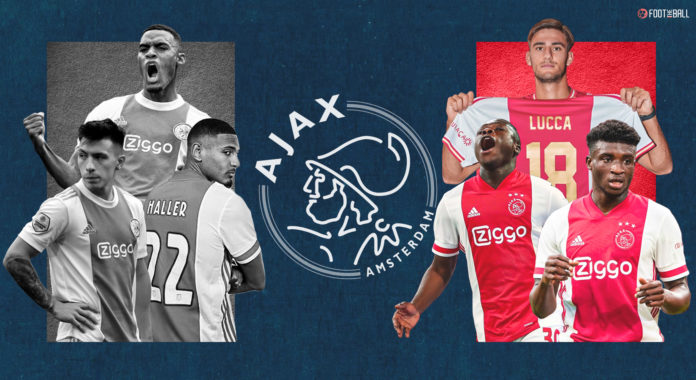 The Erik Ten Hag era at Ajax will go down in folklore. After almost 5 exhilarating and trophy-laden years with the Dutch manager at the helm, Ajax had to part ways with Ten Hag. The former Utrecht manager joined Manchester United as a manager in the summer of 2022, after Ole Gunnar Solskjaer was sacked midway through last season.

The Amsterdam club won 3 Eredivisie titles and two KNVB Cups under the 52-year-old. The Dutch champions also had that dream run in the Champions League 2018/19 season where they reached the semi-finals and narrowly missed out on a place in the finals, after Spurs beat them through a stoppage-time goal. But with Ten Hag gone and including the fact that some of their key players have also left, things don’t look that rosy right now at the Johan Cruyff Arena.

Many players have come and gone, but Ajax keep producing talents – and Kenneth Taylor is one of them!

Like every other season, after a successful campaign, teams all over Europe, especially Europe’s elites targeted the Dutch club as their shopping stop. As mentioned, manager Erik Ten Hag called his time at the club and decided to join the Red Devils. Following him at Old Trafford was Argentine centre-back, Lisandro Martinez, for €57m. More high-profile departures followed with the likes of Sebastien Haller and Ryan Gravenberch moving to Germany at Borussia Dortmund and Bayern Munich respectively.

How good is Lisandro Martinez? Read it all over here!

Just when fans from Amsterdam think that their team can capitalize on the previous season’s performance, big clubs all around the world come and rip the core apart. This time not even sparing Ajax’s manager. However, fans and football pundits might be too early to pass the judgement and write off Ajax this season. It is mainly because the fact that how quietly and smartly Ajax have gone down their business this transfer window.

They have once again rebuilt their team smartly after being gutted yet again by European elites. But this time around the task at hand was even tougher, although the Dutch Champions have tackled issues throughout the squad in brilliant fashion. How have Aja done it? FootTheBall guides you through all the incoming and outgoings for this summer 2022 transfer window at Ajax.

The 49-year-old had a contract with Club Brugge until 2023 and had a release clause of €1.5 million. Schreuder joined Ten Hag at Ajax as an assistant in 2018 but left a year later for Hoffenheim.

He was recently assistant to Ronald Koeman with Barcelona and became Club Brugge head coach in January. The 50-year-old has thrived in the role, he knows the players, the system, and has previous managerial experience on his CV, although Alfred Schreuder’s job at Ajax would be by far the biggest of his career and one that brings heightened expectation, pressure, and scrutiny.

Ajax might have signed Bassey, but the true replacement for Lisandro Martinez is Ahmetcan Kaplan.

Bassey’s move is the third-highest amount ever paid by a Dutch club, behind Steven Bergwijn’s move from Tottenham Hotspur to Ajax for £26.4m in July 2022 and Sebastien Haller’s switch from West Ham to the Amsterdam side for £20.3m in January 2021. The fee for Bassey is also the highest Rangers have ever received for a player.

Dutch champions Ajax completed their move to acquire top summer transfer priority Steven Bergwijn from Tottenham Hotspur. It marks the return of the Netherlands international winger to the Eredivise, where he previously played for PSV Eindhoven starting in 2014-15 before changing to Spurs in January of 2020.

Ryan Gravenberch got more fame from his transfer to Bayern Munich, but not many know about his life outside football.

Bergwijn pushed for a move from North London last season due to a lack of playing time. Despite being a bright spark for his national team, the electric forward was typically on the outside looking in with regards to Tottenham manager Antonio Conte’s team sheet. Ultimately, the 24-year-old secured a return to a familiar league in which he’ll get the game time he desires for the most prestigious club in the Netherlands. Ajax paid €30 million for the player, the highest transfer fee ever paid not only by Ajax, but any team in the history of the Eredivisie.

Edson Alvarez is yet another who has made his name at Ajax and for obvious reasons.

The young forward moved to the Bundesliga side on a free transfer ahead of the 2021-22 campaign but made just one top-flight start and a further eight off the bench in an unhappy spell.

Brobbey subsequently returned to Ajax, where he came through the youth ranks, on loan in January 2022 and scored seven goals in 13 games to help Erik ten Hag’s team secure the title. Ten Hag was reportedly keen to link up with the 20-year-old again at Old Trafford, but Ajax – who were in need of a forward after selling Sebastien Haller to Borussia Dortmund have now agreed to pay Leipzig €16.35million up front to complete a permanent transfer.

Ajax had been interested in Wijndal for a long time and finally, they came to an agreement with AZ Alkmaar for the left-back. The Amsterdam club agreed to pay €10 million for the Netherlands international, who signed a five-year deal at the Johan Cruijff Arena.

The 22-year-old became the first summer recruit for Ajax and is the intended replacement for Nicolas Tagliafico, who made a move this summer to Lyon. Owen Wijndal made 31 appearances for AZ Alkmaar in the Dutch league in the 2021/22 season. He contributed to 11 goals for the team, and also became a regular for the Netherlands national team. The 22-year-old is very highly rated, and has been likened to Liverpool’s Andy Robertson. With Ajax’s reputation for developing young players, the youngster could hit new heights at his new club.

More from the famous Ajax youth academy and this time it’s Devyne Rensch!

Francisco Conceicao, also known as Chico, took a bold move by departing the Primeira Liga champions managed by his father Sérgio Conceicao. Amassing 916 minutes across 39 appearances for club and country in the 2021/22 season, the bulk of Chico’s playing time came as a substitute. With the superstar duo of Vitinha and Fabio Vieira leaving Porto for nearly £40m each, there was potential for Chico’s minutes to increase.

But the youngster decided that his career progression lies in Amsterdam, at a club known for talent development. A starting role will not be guaranteed at Ajax, with highly rated Brazilian international Antony in direct competition for his preferred right winger role, but with competition high, Conceicao’s time might soon come.

Another one to leave Ajax recently was rising youngster Mohamed Ihattaren, who tore it up at Eredivisie

Ajax announced the arrival of Pisa striker Lorenzo Lucca this summer, the first Italian ever to wear the prestigious Dutch jersey. Lucca is an Italy Under-21 international who turns 22 this year and has two goals in five caps for the Azzurrini.

His height represents his greatest strength, standing approximately 6ft6in, earning him comparisons with Luca Toni. He came up through the Vicenza, Torino and Brescia academies before moving to Palermo and in the summer of 2021 Pisa.

He took his performance a level above the other defenders. Jurrien Timer’s 2021/22 numbers were insane!

Lucca hit the headlines and attracted lots of attention after scoring six goals in the opening seven games of the Serie B season, but then failed to find the net again that term. After links with Bologna and Salernitana, Lucca was snapped up by Ajax, on loan with an option to buy for €11m.

Ajax added that the deal will keep him at the Johan Cruijff Arena until June 30, 2027. Meanwhile, Trabzonspor announced that Ajax will pay 9.5 million euros for Kaplan. A product of the Trabzonspor academy, Kaplan was promoted to the Turkish club’s senior team in 2020. He helped Trabzonspor win the Turkish Super Lig title in the 2021/22 season and appeared in 18 matches.

The Turkish defender was mainly signed to replace the departed Lisandro Martinez who left for Manchester United in the off-season. Towering defender Kaplan might just prove to be the bargain buy of the season and Ajax will look to follow their own strategy of buying cheap and selling big.

Ajax and Sevilla have reached an agreement over a transfer fee for Lucas Ocampos. The Argentinian will be the replacement for Brazilian winger Antony, who has been announced as a new signing by Manchester United.

A fee worth €20 million has been agreed for the player, and he is expected to be in Amsterdam to complete his medical tests. Personal terms have also been agreed upon for the transfer, and it should be made official soon.

The winger has been quite impressive for the La Liga side, and will be a great addition to the Ajax squad. He is entering his prime years at 28, and will be able to deliver strongly in the Eredivisie.

How will Ajax cope after the loss of their former coach and players? No coach or player is ever bigger than a club, especially one with the history of Ajax. Fans have seen Ajax rebuild in recent years and no doubt one of the giants of world football won’t be held back by their latest situation.