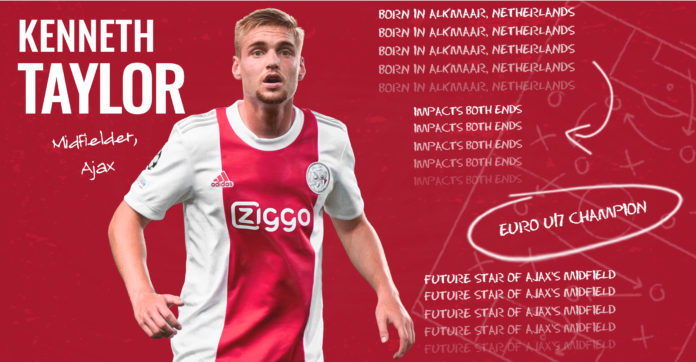 It is no secret that Ajax have one of the most famed youth academies in world football. Ever since the days of Johan Cruyff, the Dutch giants have put immense focus on development. Two of their latest offerings, Jurrien Timber and Ryan Gravenberch are causing a stir. While another, Frenkie de Jong, was embroiled in a saga of his own.

The former has developed into an adept centre-back while the latter has moved to Bayern Munich. Erik ten Hag may have left for Manchester United, but new manager Alfred Schruder will ensure that the revolution rumbles on.

One of the leading lights from the next batch of youngsters is Kenneth Taylor.

It's been a long time coming, he's excelled in just over 100 appearances for Ajax's junior sides over the past few years. Distributes brilliantly, retrieves well; just a really tidy footballer. pic.twitter.com/vzybUsUHKK

The prodigious talent is making an impact on both the senior and Jong Ajax teams. Becoming a regular this season, Taylor has already shown the promise of an explosive future. If he continues on this trajectory, it won’t be long before the European giants come circling.

Antony is a Red Devil!

Kenneth Taylor is another graduate of the famed 2002 batch. Hugo Ekitike, Aaron Hickey, Georginio Rutter and others make up that illustrious list. Taylor was born in Alkmaar and started his career with the amateur club SV De Foresters. In 2010, Taylor joined the youth program at Ajax.

He was initially playing as a striker before coaches noticed his all-around talent. Therefore, Taylor converted into a central midfielder of a box-to-box nature.

Kenneth Taylor made his debut for Jong Ajax in late 2018 as a substitute. However, it did not take long for his expert qualities to blossom. Taylor became a regular for his side in 2019-20, featuring 19 times.

Moreover, his solid performances had not gone unnoticed at the international level either. Taylor was an important member of the Netherlands squad that won the UEFA Euro U17 tournament in Ireland in 2019. He has continued playing for Jong Ajax while making his first-team bow in late 2020.

After some hiccups, Taylor has truly arrived at the scene this season. He is now an established member of the first team and an explosive start to the season has seen him score twice and assist once in 5 league games while making his first 90′ appearance in the UCL.

Kenneth Taylor has generally not been a raw numbers player. However, it’s his underlying fundamentals that need a good look. Firstly, Taylor’s shooting accuracy has improved tremendously. His shot-on-target (SoT) percentage has jumped from 44.7% in 2020-21 to 56.3% in 2021-22.

Kenneth Taylor! ⚽️🎯 Is this your favourite Ajax #GoalOfTheMonth?

That means he is working the goalkeeper on more than half of his strikes. Moreover, Taylor is averaging 0.92 SoT/90 which is extremely good for a young prospect. The whole foundation of Ajax is based on quick, attacking, and beautiful football. That’s why Taylor is actively encouraged to follow his style.

Netherlands U17's have won the Algarve Cup after a 3-1 victory over Germany!

He has become an integral member of the line-up, mostly playing almost the whole 90 minutes. His teams perform better with him on the pitch as evidenced by a +13 and +8 team success for Ajax and Jong Ajax.

Kenneth Taylor is a modern-day pass master. Therefore, it’s no surprise that he looks up to Georginio Wijnaldum. The veteran Dutch midfielder is one of the most formidable sights on the ball. Wijnaldum was a key piece behind Liverpool winning the Champions League and Premier League.

Taylor wants to emulate his idol, both in terms of style of play and career trajectory. However, that is not all. Taylor always has a great love for Pep Guardiola. Taylor’s style of play is akin to Toni Kroos or even Kevin De Bruyne playing exquisite passes in dangerous areas.

Similarly, Taylor is also a very calm head on the ball who assesses his options beforehand. He can run by defenders, leaving space behind, or aim for distance himself. Truly an all-around package.

Kenneth Taylor had been waiting for his chances as a truly world-class batch of youngsters had arrived at Ajax. Ajax have been playing him occasionally and he racked up 10+ appearances for 2021-22. Therefore, it is no surprise that featuring regularly will impact his numbers.

And that is exactly what has happened. Shorn of their aces, Ajax have leaned into a rebuilt, doing it expertly, yet again. Kenneth Taylor look set to benefit the most.

“Kenneth Taylor was outstanding. He had a very good contribution to our game on the left side. Besides Taylor, I also want to point out that both Jurriën Timber and Maarten Stekelenburg had an excellent game also.”

It is important to remember that the midfielder is only 20 years old. His best years are ahead. Moreover, his versatility means Schreuder can play him in defensive positions. Taylor has featured in front of the backline and as a center-back too.

The youngster has excelled in gliding past opponents with ease alongside winning back the ball effectively. There is rising excitement surrounding Kenneth Taylor, and it does look like the future of Ajax’s midfield is in safe hands.

An area with immense growth potential. Kenneth Taylor has replaced Ryan Gravenberch in the starting line-up. The graduation of academy graduates to the first team is always the path to success at Ajax. Questions about how Taylor will fit in at a new Ajax side under a new manager have been answered by an emphatic start to the season.

It is a given that there will be a good amount of buzz surrounding Taylor. Moreover, Kenneth Taylor can also provide an effective deputy to Edson Alvarez, who’s on Europe’s watchlist. Therefore, the future is bright and unpredictable. Ajax will be careful in how they continue to nurture his skills and talent.