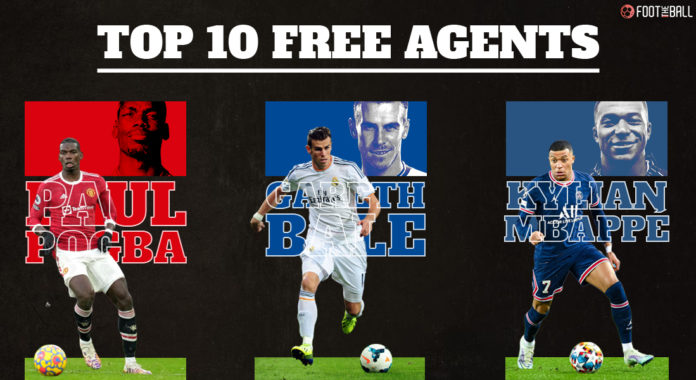 The end to the 2021-22 footballing season is coming to an end across Europe. There have been several fascinating storylines that have developed throughout. From Manchester United hiring Erik ten Hag to PSG’s bittersweet league triumph. Bayern Munich won a 10th consecutive Bundesliga title. AC Milan are on the verge of winning their first since 2011.

Read also: Where are the Rossoneri’s heroes of 2011 now?

Meanwhile, Real Madrid won their 35th La Liga crown. However, there is one area that will draw a lot of attention as the summer looms. It is shaping up to be a big transfer window for free agents.

There are some names on the market but it could all become a circus for clubs and players. FootTheBall brings you the top 10 free agents that are on offer right now.

The biggest name on the list of free agents. The race to land (or not) Mbappe will be a very fascinating watch. Real Madrid are the obvious favourites to land the supreme goal poacher. However, PSG are also trying its best to retain Mbappe. There have been talks of a record-breaking deal back-and-forth.

Real Madrid president Florentino Perez: "Fans are excited about Kylian Mbappé? I hadn't thought about it – but now that you tell me, it could be true… once we will plan the team for the next season, we see what happens", he told @marca. ⚪️⭐️ #RealMadrid pic.twitter.com/JWt7WSZV1K

Madrid are confident of landing the ace with Mbappe joining the duo of Karim Benzema and Vinicius Jr. Moreover, they are virtually the only club with the cash to afford Mbappe. Manchester City can try but Mbappe’s obsession with Madrid trumps it. Nevertheless, whether Mbappe leaves or stays, this saga is set to dominate the upcoming summer.

The transformation of Rudiger into a defensive behemoth under Thomas Tuchel has been a staggering success. The tall, lanky defender is a no-nonsense, hard-tackling player who can score from time to time. Moreover, Rudiger is also Chelsea’s best defender and given the club’s uncertain future, they will be much worse off without him.

Granted there is still time for this to be sorted out before the end of the season.

However, one of the main sticking points has been the wage demands. It is unclear whether Chelsea’s new owners will be willing to part with that kind of money straightaway. Nevertheless, Real Madrid are the favourites to land him and are said to be just a step away from official confirmation.

The future of Paul Pogba got even muddier with the death of Mino Raiola. Given he was one of Raiola’s star clients, no doubt a big move could be on the way. However, it will not be easy. Pogba has had an inconsistent past couple of years.

Manchester United have not seen the best version of him for some time. No club will be willing to take him on his current wages. Pogba is one of the highest-paid players in the Premier League.

Therefore, the demands have to be reduced. PSG have been strongly linked with the midfielder. Juventus are also said to be interested in getting him back. However, none of it will be easy and even Manchester United could offer him a new contract.

The Juventus playmaker has been riddled with injuries in the recent past. However, Dybala has been performing solidly for the Old Lady this season. The 29-year-old has been linked with Manchester United, but there are other options.

🚨 Manchester United's incoming boss Erik Ten Hag would be interested in signing Paulo Dybala on a free transfer this summer.

Dybala could be a solid addition for a club looking for a quick fix. Granted, his brittle nature will be a concern but Dybala remains a top performer on his day. Therefore, this transfer will be a keen one to watch.

The Arsenal striker have spoken of his ambition to play Champions League football. However, his form has not been the greatest this season. After the departure of Pierre-Emerick Aubameyang, Lacazette has taken on the mantle of the central striker. His linkup play has improved but the goals have dried up.

Would Gabriel Jesus be the perfect replacement for Alexandre Lacazette at Arsenal?

This is what the stats say… 🤔 pic.twitter.com/sgv63w5JM0

Eddie Nketiah has been Mikel Arteta’s first choice recently. It is hard to see who exactly comes looking for Lacazette. Granted, there is a lot that he can offer on his best days. However, all of Europe’s top teams are well stacked in that position.

The predatory hitman hit 20+ goals in 2020-21 to lead Atletico Madrid to the title. It was a nice reminder of what Barcelona let go but Suarez’s time is nearing an end. Atletico Madrid have confirmed that Suarez’s stay at the club will be over at the end of the season. He said a tearful goodbye to the fans in his last home game.

The latest speculation reports that Suarez is plotting an ambitious move to Villa Park to join forces with former teammate Steven Gerrard. Suarez has been an excellent goal scorer for years to come and has one final chapter in him that will be clear in the summer.

Some truly world-class players have never lifted the Ballon d’Or. Luis Suarez is one of them

Wales. Golf. Madrid. In that order? That has certainly been the case for some time. Bale has been all but frozen out of getting significant minutes. It is abundantly clear that he is leaving Madrid. However, the future is unclear. There have been strong suggestions that Bale might retire altogether after the FIFA World Cup if Wales qualifies.

Considering Gareth Bale is not getting much game time at Real Madrid at the moment, his stats for Real Madrid are amazing. pic.twitter.com/mLaQwg9e0k

Moreover, it is unlikely that any major offers will come his way. He is one of the maverick players who bring out their best for the national team. Replicating that kind of form at the club level, and his problems with injury, will not bring many suitors.

The Barcelona attacker has seemingly been reborn under Xavi. He has become one of the leading assists providers in La Liga. However, the contract issue has been rumbling on. Dembele and Joan Laporta had a falling out over wage disputes in the January transfer window.

Xavi: "Gavi and Araújo are very important to us for the future. Barça cannot allow them to leave. I want to think that both of them will renew their contract”. 🔴 #FCB

“I see Ousmane Dembélé very happy, if he wants to stay he should talk to the club”. @barcacentre

It looked like Dembele would be signing a pre-contract agreement soon but that did not materialize. The situation has improved in recent times with Xavi and Dembele’s teammates reasserting his importance. Given how problematic the money issue is, there may not be too many enthusiastic parties available.

The Italian forward has been a true servant to Torino for several years. However, his time in the city is coming to an end. Belotti can be an excellent addition to any of Europe’s top clubs. He is a proven goal scorer who is excellent from all distances. Moreover, Belotti is a true force of nature and defenders have a hard time dealing with him.

Andrea Belotti wants a move to Milan and he is willing to wait for the summer for it, reports @86_longo. The move will depend on Zlatan Ibrahimovic's future at the club.https://t.co/qvcYeKiIji

Several clubs are monitoring his situation closely. Belotti still has a lot to offer and his importance cannot be discounted at any stage. Therefore, he can turn out to be a shrewd signing in a star-studded free agents market for strikers.

The longtime Borussia Monchengladbach defender has confirmed that his time at the club is coming to an end. Ginter has been a stalwart with the Foals and will immediately improve any defence.
SC Freiburg have since quickly moved to snap him up. Another free agent off the market before the window even opened.

The last word regarding Matthias Ginter's future has not been spoken yet. The defender seemed close to Bayern a few weeks ago, but talks have stalled as the club is not 100% convinced. Ginter doesn't want to wait forever & wants to feel valued. Inter are attentive [@Gazzetta_it] pic.twitter.com/JtTpjtpb1r

Such has been the trend so far with so many free agents. Players electing to run down their contract has become increasingly and clubs are now quick to take advantage of it. There will undoubtedly be more players added to this list by the time the window opens.