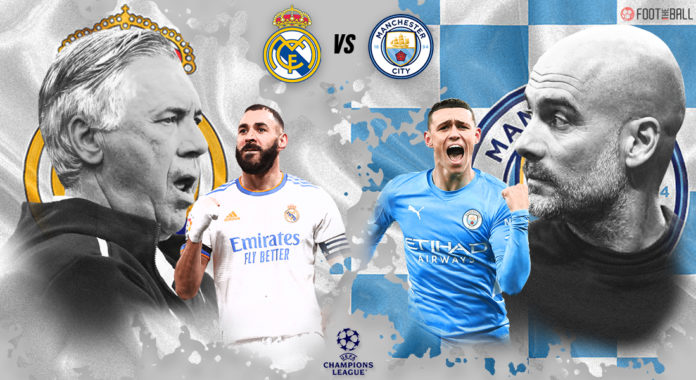 One of the most exhilarating games of the European season is ready to enter its second chapter. Manchester City hold the slight advantage but it’s pretty much an even slate.

The champions of La Liga have been an irresistible force. Their league opponents were no match for the mastery of Karim Benzema who has proved even deadlier in the Champions League. The veteran striker has scored nine goals in four matches, with two consecutive hat-tricks. Benzema is undoubtedly Madrid’s most lethal weapon.

City found out the same to deadly effect. Carlo Ancelotti knows that his defence will be a bit suspect and they cannot afford to get into another goal fest. Madrid will be buoyed by their home crowd and will be the favourites to make it through, given their history. However, it will not come easy at all over the 90 minutes.

The defending English champions are fighting on two fronts. City are just a point ahead of Liverpool in the race for the Premier League. They raced out to a two-goal lead against Madrid but were pegged back at the end. Pep Guardiola’s reactions during the match summed up the situation.

The Catalan knew that it was important to kill off the game early on. City wasted some good chances in the first half and were made to pay for them. Nevertheless, the tie is slightly in their favour. The one-goal lead can prove to be a gamechanger if their defence stands firm. This will be a great chance for City to make their second consecutive Champions League final.

Casemiro will return and provide a much needed boost to the defensive side of things. David Alaba has been ruled out after being substituted in the first leg.

City will know more about the returns of John Stones and Kyle Walker. However, a major boost will be the return of Joao Cancelo on the right.

The battle of the two great playmakers in midfield will be key. Kevin De Bruyne has established himself as one of the best in his position across Europe. The Belgian has been the linchpin of Manchester City’s fearsome attack over the years.

De Bruyne has racked up 25 goal contributions (14 goals, 11 assists) across all competitions. He can play just in behind the front line and in attack too.

Kevin De Bruyne has been directly involved in 14 goals in his last 11 home games:

De Bruyne had a superb outing in the first leg, his visionary passing causing Madrid trouble all night. Apart from scoring the opener, he was finding his teammates time and again. Therefore, it will be any surprise if he continues to remain this effective.

Therefore, Guardiola is always looking for his players to involve De Bruyne. Madrid have to be extremely wary of his runs, mainly the returning Casemiro.

As expected, there was one man who disrupted City’s entire work. Karim Benzema has been on song in 2021-22, scoring from all angles and against all opponents. Therefore, it was no surprise to see him net a brace against Manchester City. The backline just do not know how to handle the energetic, charismatic player who always seems to find the net.

Moreover, with Vinicius Jr. in full flow, Benzema’s play goes up another level. Ancelotti has clearly chalked out a plan to feed the Frenchman the ball. Moreover, Madrid have two excellent playmakers in Luka Modric and Toni Kroos. Benzema is Madrid’s best bet to overturn the one-goal deficit.

There is no doubt that this match will be a rip-rollicking affair. Both teams are packed with superstars across all departments. Whoever progresses, the match is slated to go down as an instant classic. FootTheBall predicts a 3-2 win for Real Madrid.