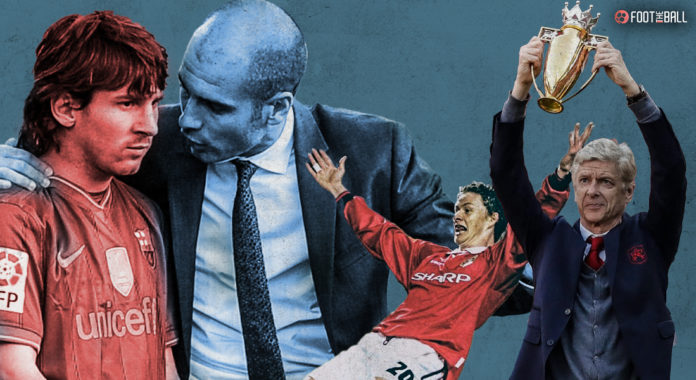 They cannot…can they? There is something special brewing at Liverpool. The Reds are well on course for an unprecedented quadruple. They have one foot in the final of the Champions League and play Chelsea in the FA Cup final. Moreover, Liverpool are just one point behind Manchester City in the Premier League title race, having already won the Carabao Cup.

Can Liverpool actually dream of a quadruple? 😱💭 pic.twitter.com/RJovTtrF2T

Jurgen Klopp’s juggernauts have the chance to become the first English team to win all major trophies on offer in a season. Liverpool have been motoring along without any signs of slowing down. The front three have got further steam with the addition of Luis Diaz. The defence has been impregnable as always.

Liverpool could be just 8️⃣ games away from completing a stunning quadruple… 🤩 pic.twitter.com/Ny0bXkTQpg

This version of Liverpool can justifiably stake a claim in having one of the best team seasons in history. FootTheBall counts down the ten teams in the recent era who have shaken up the world.

Barcelona and the Sextuple

The days of absolute dominance when Pep Guardiola announced himself to the world. The former player took charge of Barcelona aged just 37 in 2008. The season that followed would be one of the greatest in footballing folklore. Barcelona won ALL the trophies on offer to complete the perfect sextuple.

Moreover, by winning the Champions League, La Liga, and Copa del Rey, the Blaugrana became the first Spanish side to achieve the treble too. 2009 saw additions of the Spanish Super Cup, UEFA Super Cup, and the Club World Cup. This kind of winningness from one team was unprecedented back in those days.

Guardiola became the youngest manager to win the Champions League. Lionel Messi broke out as a superstar to win his first Ballon d’Or. The midfield of Xavi, Andres Iniesta, and Sergio Busquets became one of the best troikas ever.

One of the most storied seasons in English football. Having gone trophyless in 1997-98, few gave Manchester United a chance of winning anything. Sir Alex Ferguson orchestrated a monstrous turnaround that saw the Red Devils lose just three league games. However, the most enduring part of the season was the birth of ‘Fergie time.’ United pulled off several memorable comebacks in the final minutes of matches.

Sir Alex Ferguson deserves a lot of credit for the treble, here’s why

Manchester United’s 1998/1999 treble winning team have been voted as the best team in the history of the Premier League. pic.twitter.com/QseEhfcToM

Nowhere was this most visible than their FA Cup run. Six of their 12 goals scored in the competition came after the hour mark, including Ryan Giggs’ famous slaloming finish against Arsenal.

However, the pinnacle of overturning matches was the Champions League final. United were trailing since the sixth minute and needed a miracle heading into second-half injury time. That is when David Beckham swung in two corners which caused chaos.

We completed the Treble when we won the UEFA @ChampionsLeague on this day in 1999 – it's great to be back. pic.twitter.com/tax4MrIIga

The first one was eventually converted by Teddy Sheringham before the “Solskjaer’s has won it” moment arrived. Therefore, the most unlikely treble was secured and United became the first English team to achieve the feat.

Bayern Munich are one of the most accomplished sides in history. After all, they have won 10 league titles in a row. Bayern completed the first treble in club history back in 2013 under Jupp Heynckes. The Bavarians have had some lean years in Europe since then but the appointment of Hansi Flick was a masterstroke.

On this day last year, FC Bayern became the second team in history to complete the sextuple after beating Tigres UANL in the Club World Cup final 🏆🏆🏆🏆🏆🏆 pic.twitter.com/VXT3UvXiwn

Having come in November 2019, nobody could have foreseen what was to follow. The Bundesliga was secured easily but the other trophies were the bonus. Bayern had several close matches in the DFB Pokal and defeated PSG in the Champions League final.

That run saw the memorable 8-2 thrashing of Barcelona. Moreover, the run of silverware was not over.

Bayern would win the German Supercup, UEFA Super Cup, and the Club World Cup. It completed a superb sextuple for Bayern, the first in their history.

Three in a row

Three Champions League titles in a row? Surely, you are joking Mr. Writer! However, this is no funny business. Zinedine Zidane and Cristiano Ronaldo formed one of the most devastating player-manager combinations in history. Real Madrid achieved the impossible feat of winning the coveted prize for the third time.

Ronaldo led the way with 44 goals across all competitions including 15 in the Champions League. They survived against Juventus in the quarters by the skin of their teeth before edging out Bayern Munich. Liverpool stood in the final but this behemoth was not slowing down.

Madrid downed the Reds 3-1 to further cement their place as the best side in the competition’s history. Moreover, all of this came on the back of having already won the FIFA Club World Cup and UEFA Super Cup during the season.

The records may belong to others but Arsene Wenger and Arsenal have the ‘golden’ Premier League title. The Gunners managed the impossible feat of going an ENTIRE league campaign undefeated.

Arsenal were led by an extremely extinguished star cast containing three Hall of Famers as of now. Thierry Henry, Dennis Bergkamp, Patrick Vieira were the wise heads behind Robert Pires, Kolo Toure, Lauren and others.

Arsenal are the only team to have received a gold Premier League trophy after their 'invincibles' season in 2004. pic.twitter.com/1UvnwxSNU1

The result was 26 wins, 12 draws, and zero defeats. Moreover, they also had the most goals (73) and the least conceded (26). Wenger has been a legend for the Arsenal faithful and will never be forgotten in English history.

Juventus had been Serie A winners nine times in a row. However, the start of the 10th season in 2020 was different. Andrea Pirlo was appointed manager with no significant top-flight experience. That set the stage up perfectly for one of Juventus’ rivals to clinch the coveted trophy.

Inter were the best placed to deliver and they did emphatically. Antonio Conte had come close the season before finally winning it all.

Antonio Conte dedicating the Serie A title to himself is the energy we're here for 😂🏆 pic.twitter.com/98Jv51dOhD

Inter had a starry cast of players led by Romelu Lukaku, the league MVP. Conte’s passion and fiery nature were no match as his side blew away the competition. 28 wins, seven draws, and just three losses enabled them to finish a whopping 12 points ahead of their city rivals.

Moreover, it was their first league crown since 2010 and therefore tasted even sweeter.

Granted it’s not a “club,” given Manchester City are the only member. The Centurions set several records in a truly astonishing season. City lost only two games in enroute to 32 wins with 106 goals scored and a goal difference of +79.

It was clear that this was Pep Guardiola venting out his anger because he lost out on the title in the previous year to Chelsea.

Stick to your principles, beliefs and purpose, regardless of what outsiders say pic.twitter.com/TCRiPjg2C7

They beat each team in the Premier League and had one of the greatest ever single-season performances. Moreover, they had a stellar cast of players including Sergio Aguero, David Silva, Vincent Kompany, and others. City also won the Carabao Cup but suffered disappointing exits in the other two competitions.

Atletico Madrid were becoming a burgeoning force under Diego Simeone and their first major mark was in 2013-14. Los Rojiblancos had not won the league title since 1996. Barcelona and Real Madrid had shared the La Liga trophy since 2004. Atletico Madrid were not given much chance of breaking that duopoly.

What made the feat even more remarkable was that the team lacked any true superstar. It was a mix of veterans alongside lesser known talents. The ‘group mentality’ was key in polishing these rough diamonds by Simeone. Diego Costa established himself as a premier goal poacher with 36 goals. Diego Godin and Miranda anchored the defence.

Raul Garcia had a breakout season while Arda Turan flourished.

Moreover, Atletico also made it to the final of the Champions League where they suffered a heartbreaking loss to Real Madrid after extra time.

The last team to win the Bundesliga title in 2012 before Bayern Munich’s decade of dominance. Borussia Dortmund were an irresistible force under Jurgen Klopp and his “heavy metal” style.

Like Atletico Madrid in 2013-14, the German manager had a cast of players without any true superstar. Robert Lewandowski was coming into his own as a goal-scoring phenom.

Dortmund at the double

Of course, there have been some momentous non-#Bundesliga meetings, too.

Moreover, the season would become a double delight with Dortmund also lifting the DFB Pokal trophy.

That night in Moscow

Manchester United’s third Champions League crown was achieved in equally enthralling circumstances. The Red Devils had made it to the final on the back of narrow wins over Lyon and Barcelona. The final was another spectacular affair. Chelsea awaited them with the two sides playing out a 1-1 draw till penalties. The shootout was one for the ages.

John Terry had the chance to seal the trophy for the Blues but slipped for the crucial penalty.

ON THIS DAY: In 2008, United show off the Premier League and Champions League trophies at Old Trafford. #mufc pic.twitter.com/Ks6ymfzuVC

Edwin Van der Sar was the hero with his save from Nicolas Anelka. Sir Alex Ferguson had another legendary night to savour, coming after the triumphs in the Premier League and the FA Community Shield. The front three of Wayne Rooney, Carlos Tevez, and Cristiano Ronaldo were one of the best to get together.