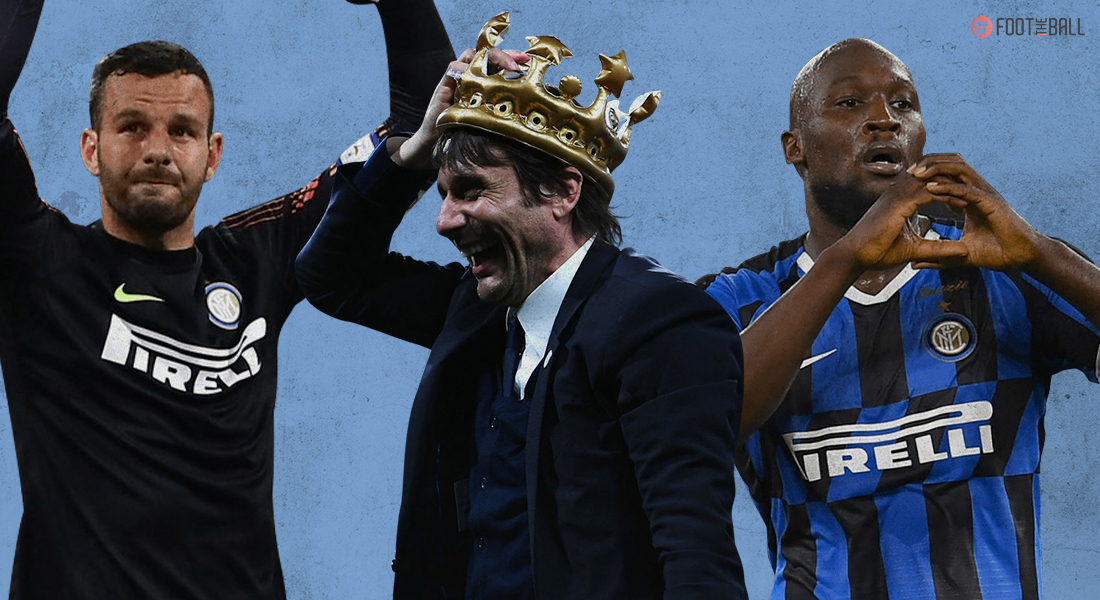 The day, or shall we say the evening, is finally upon us. Inter, who were last Serie A winners in the 2009/10 season, have finally put The Old Lady to sleep as Atalanta’s failure to win against Sassuolo confirmed the Nerazzurri as champions. Juventus who were already out of contention after Inter’s latest win over Crotone, are currently 16 points behind Conte’s men, and  will see their consecutive winning record stop at nine titles.

To say Antonio Conte has been at the heart of it all is just the tip of the iceberg. After finishing 21 points behind Juventus in 2018/19, Conte’s arrival in the summer of 2019 saw the team finish 2nd in the league, just one point behind the champions, as well as reaching the Europa League final, losing to Sevilla.

With most of the squad same in both of his seasons, one of Europe’s most lethal strikers and Conte’s style of playing fast-paced offense, three-man defence, and a ‘never say die’ attitude, the result has been one epic season where they have decimated their opponents week in and week out.

This title will also feel extra special for those in blue-and-black as it means they now have the second most titles in Serie A history with 19, one above bitter rivals AC Milan. As Conte praises his “team of granite” for the winning mentality that they have shown all season, one thing is for certain – this Inter side is here to stay in the seasons to come.

HOW THEIR JOURNEY UNFOLDED

Inter started off their season with a rip-rollicking 4-3 win over Fiorentina with their the equalizing and winning goals coming in the 88th and 89th minute. The first signs of a whirlwind season.

Fiorentina were 3-2 up on 87 minutes against Inter Milan last weekend. Fast-forward to 89 minutes and they were 4-3 down. Here’s Inter’s winner. Never say die.

They collected two wins from their opening three games, but slumped to a Zlatan Ibrahimovic double on match day four, losing the Milan derby. Inter fans might have felt a sort of deja vu after this, as has so often been the case for this team. But…something miraculous happened.

The team went on an 11 game undefeated spree that lasted till the beginning of January. Eleven! Their wins came with an average of at two goals scored per game as Conte’s men tore up the league and, with Juventus combusting in front of goal, were able to cement their place at the summit.

23-yo Lautaro Martínez is second on Inter in goals, behind only Romelu Lukaku, but he's contributing a lot more than just goals to the Italian side pic.twitter.com/MOP1yWapED

At the beginning of January, that spectacular run was ended by Sampdoria in an ugly 2-1 loss away from home. The match featured seven yellow cards and a missed penalty by a reborn Alexis Sanchez. Again, the sinking feeling of crumbling towards the back end of the campaign might just have started returning when they went on an even more mind-boggling run.

Since that defeat, Inter have played 18 times in the league. They have lost exactly…zero! Yes, Inter have lost the same number of games as Champions League titles won by participants in the ‘Oil Clasico’ this year. This run has also included vital wins against the chasing pack of Juventus (2-0), Atalanta (1-0), Lazio (3-1), AC Milan (3-0) and draws with Napoli and Roma.

To put that into their own historical context, even Jose Mourinho’s treble-winning side were only able to get to 82 points. Conte’s team have 82 points right now, with four games still left! They have been in absolutely unstoppable form with 31 goals in their last 17 games, while conceding only six.

It comes as no surprise then that they have the best goal difference with +45 and of course, the fewest losses in the league with two and fewest goals allowed (29).

With other league leaders around Europe gaining more coverage and plaudits, Inter Milan have really shown what a team can do together as one, with a well-drilled regimen.

When we look at this Inter Milan team, there is one person we have to start with – Antonio Conte. The former Juventus boss and three-time Serie A winner was given a frosty reception after being unveiled as boss in 2019, but his first season was an unparalleled success in recent times.

A run to the Europa League final, fewest losses in the league and finishing one point behind Juventus in second are no mean feats. Conte’s blueprint of using the 3-5-2 with wing-backs emerging as key contributors. Their style of quick possession buildup followed by releasing balls behind the opposition defence became a hallmark in Milan. His team’s defence have been unshakable in the league with the best record among the 20 teams, with Stefan De Vrij and Milan Skriniar being ever-present.

Any talk on this team has to center around Belgium phenom Romelu Lukaku, who arrived in 2019. The ex-Manchester United was criticized for his poor first-touch and shooting prowess in England but has found new life in Italy. Along with crime partner Lautaro Martinez, the pair have combined for 36 goals in the league with Lukaku notching up 21 strikes, the second-most. The forward has also provided 10 assists which is the highest in the league as well.

It is hard to single out any player other than Lukaku when we look at the team. This speaks volumes as to how much the team has gelled together this season. Their wing-backs, fundamental to Conte’s system, deserve a special mention nonetheless.

6 – Before Achraf #Hakimi, the last Inter defender able to score 6 goals in a Serie A campaign was Maicon in 2009/10. Trains. #RomaInter pic.twitter.com/vP0sC2f7uG

Praise must also go to the midfield unit, namely Christian Eriksen who had a few grumbles about leaving in January but ultimately ended by staying, Marcelo Brozovic and Alexis Sanchez (another person rejuvenated under Conte), Nicolo Barella (signed permanently this season). Suffice to say that this whole venture has been a total team exercise if there ever was one.

6 – Marcelo Brozovic is the player to have delivered the most Serie A assists since the start of November: six, with just 19 chances created. Generous. pic.twitter.com/mMntUSRoTZ

Many of these players have only been at Inter for two years, the same as Conte himself. The results are evident on their own that Conte has been able to get the best out of so many players who were considered as not important for their former clubs.

Inter Milan have grandly announced themselves on the national stage this season, with Conte building a team that is habituated with taking the game deep and winning matches together. There is no longer a single-team reign in Italy. With AC Milan also on-track to finish above Juventus and Atalanta continuing their run as Italy’s most free-flowing team, next season can only get better for Serie A.

In Europe, after a crashing out in the group-stage of the Champions League this year, Conte’s attention will no doubt turn to make Inter world-beaters on the continental stage as well. Much of the same next year? There’s nothing to suggest otherwise right now