Antony is a Red Devil! 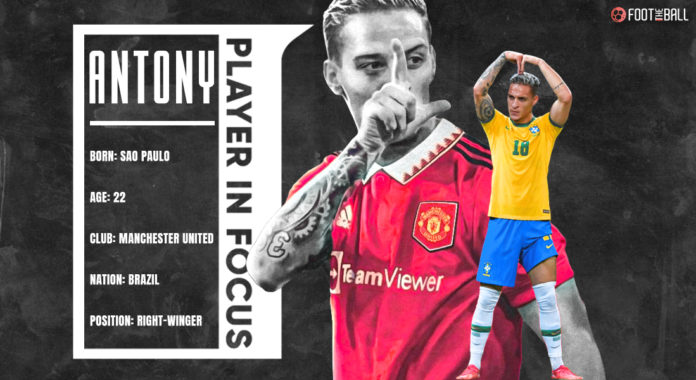 Brazil has always produced wingers that have dazzled at the biggest stages of football. The likes of Raphinha, Vinicius Jr. and Gabrielle Martinelli look ready to take the mantle up from Neymar as the lead Brazilian winger in world football.

However, no Brazilian winger has made as many headlines as Ajax’s winger Antony has.

Antony Matheus Dos Santos or Antony hails from the town of Osasco a city which looks like the frames of the famous movie the City of God. This should give you the idea of the adversities the younger winger must have faced in his childhood. But nonetheless, the winger thrived to reach his potential. Ever since landing in Europe has exploded into one of the most consistent and exciting wingers on the continent.

His skill, flair and tenacity on the ball marks him out as an archetypal winger from the Selecao. Now that Erik ten Hag’s tactics are taking shape at Manchester United, the Dutch coach has taken another one of his players from Ajax to Old Trafford after signing Lisandro Martinez.

An agreement has been reached for the transfer of @Antony00 🤝🔴#MUFC

Antony shot up the charts for Manchester United since he fills a position of need on the right side of the attack. Moreover, with speculation over a Cristiano Ronaldo transfer, the options in attack for ten Hag are thinner than ever. Is Antony the man to provide that shot in the arm at Old Trafford? We analyse.

Antony moved to the Eredivisie from his native Brazil in the 2020 summer window from Sao Paulo. Since his arrival in the Netherlands, he has become a nuisance for defenders in the league. However, the Champions League is where he has truly caught the eye of Europe’s elite clubs with some breathtaking performances.

A look at his stats over the last 365 days shows the world-class potential the 5 foot 7-inch winger possesses. In 30 league and Champions league appearances combined the Brazilian winger has scored 10 and assisted a further eight goals. His expected goals and assist numbers per 90 minutes already sit at a world-class 0.6, the same as established wingers such as Sadio Mane and Riyad Mahrez. A deeper dive into his stats makes his potential even more evident.

Antony attempts 55 passes a game with a 78% accuracy very similar to that of Sadio Mane who only completes 38 passes a game with the same accuracy. This shows that the winger likes to be involved in play and be active when his team is in possession.

His progressive numbers for a 22-year-old are also extremely promising. He completes 5.3 progressive passes a game and with a ludicrous 11.6 progressive carries a game. His skill with the ball makes essential to the way this Ajax side plays. The Brazilian winger is one of the most attacking progressors of the ball at the Dutch giants.

He completes an average of 1.6 dribbles a game which is bound to go up as his experience does. Much like Brazilian wingers before him, he is blessed with extremely quick feet and is rapid at full tilt.  His pace and trickery can stretch defences.

Bring at Antony to the theatrepic.twitter.com/a3D5r1c4w5

Antony is also adept at finding space in attacking areas. He receives 12.2 progressive passes a game. His ability to find space in the opposition penalty box is also an excellent asset. He receives 6.6 passes/game in the attacking penalty box. It ranks him in the top seven percent of wingers in the above-mentioned metrics.

The Brazilian is an inventive and intelligent player. His speed, acceleration, 1 on 1 ability and crossing is exceptional. He is a little too left footed but his endeavour and tenacity allow him to clean up his own mess or come up with a creative solution for problems.

He loves receiving the ball either on the right touchline or the right half-space from where he can dribble inside to float crosses to the far post or shoot with his left.  He also has shown evidence of being a classic winger who runs to the by-line for a cut back into the centre of the box.

His ability on the ball, guile and swagger is reminiscent of the great Arjen Robben. The Dutch winger is often recognised as the greatest left-footed right winger of all time.

After Erik Ten Hag was confirmed as the next Manchester United manager there were bound to be rumours surrounding players from his current Ajax team to the Red Devils. From Edson Alvarez to Lisandro Martinez to Jurrien Timber and Antony, more than half of the Ajax squad has been linked to the club since ten Hag took over.

Antony would surely fix a lot of the problems Manchester United are facing right now. Red Devils lack a conventional right-winger in the squad. Jadon Sancho has played there to good effect so far but he looks more comfortable on the left where he can cut in on his stronger right foot. The same goes for Marcus Rashford and Anthony Elanga. Beyond them, the winger options are thin. Martial has established himself as the first-choice, albeit injury-prone striker. The cloud of Cristiano Ronaldo hangs over the club.

Therefore, adding Antony not only beefs up the quality of the attack, but sorely addresses a position of need.

Timber's versatility (CB/RB) would be an asset for Man Utd while Sancho LW – Antony RW would make sense 🇧🇷🇳🇱 pic.twitter.com/KFaYvHVNgR

The clubs were locked in tense negotiations, with Antony publicly coming out in interviews to force through a move. This ultimately forced the Dutch champions to relent. Still, being this late in the window also meant United had to end up overpaying. However, if there was a manager in world football who knows how to get the best out of Antony, it’s Erik ten Hag.