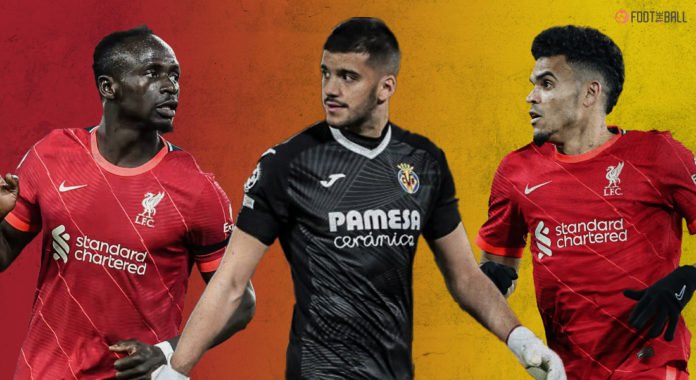 Liverpool entered their first leg tie against Villarreal as firm favourites at Anfield. Jurgen Klopp’s side were imperious in the league with the Yellow Submarine not quite. Unai Emery knew he had a real job on his hands.

As expected, the game was mostly being played in Villarreal’s half over the opening minutes. Sadio Mane had the best chance, finding space inside the box but skewing his header wide. Luis Diaz tried his luck but was denied by Geronimo Rulli.

12' – Good opportunity. Salah is released down the right and checks inside. His cross meets the well-timed run of Mane, but he can't direct his header on goal.

Diaz was proving to be a constant menace, Rulli parrying another shot away. Mane had the next best chance but his deflected shot spun just wide. Mo Salah had two quick chances but blazed his efforts over the bar. The best chance fell to Thiago whose belter from 25 yards out rattled the post. That was the closest Liverpool came to scoring in the opening half.

All square at the break in Anfield. pic.twitter.com/JhFef80OVZ

Fabinho had the ball in the net within five minutes of the restart following a corner. However, the goal was ruled out for offside. Nevertheless, it soon became 1-0 to Liverpool. Jordan Henderson’s cross from the right took a deflection of Pervis Estupinan and deceived Rulli to land up in the net. One soon became two with Salah slipping in Mane who poked a finish past Rulli.

53' – Salah finds Henderson on the overlap and his cross takes a deflection off Estupiñán and loops in. Big goal in the tie!

Andy Robertson thought he had scored Liverpool’s third but was offside. Liverpool were dominating possession now with Villarreal looking down. They were trying to move forward but the Reds’ backline held firm. Unai Emery will have to work his magic in Spain as Liverpool held out for a comfortable 2-0 win.

It took more than 50 minutes but Liverpool were far the better side all throughout. The front three was causing Rulli all sorts of trouble. Thiago was in full flow while Trent Alexander-Arnold was a master of passing. There were frequent forward runs all the time with Villarreal failing to make much headway. The first goal did have a touch of luck but the second was all about Salah’s brilliant pass.

Alisson was never threatened and rarely had any work to do. The fact that there pressure was so intense meant that even when Villarreal tried to escape, they had no place to go. Moreover, they could have scored more but for some wastefulness. Therefore, it is very hard to see the second leg going any other way but the same.

It was a spirited display but like Everton at the weekend, Villarreal crumbled after the break. Estupinan’s was the unlucky recipient of the own goal while Raul Albiol just about played Mane onside for the second. The major problem was that their attackers were hardly involved in the game. Both Danjuma and Chukwueze barely had any luck in Liverpools’ penalty area. They made some driving runs but it was never going to be enough against this outfit. The introduction of Boulaye Dia sparked some life and he did have the only shot on target for Villarreal. Unai Emery will need to plan something really special if his team are to overhaul the deficit in Spain. The return of Gerard Moreno will be key and to move Giovani Lo Celso to a playmaking role.

It is hard to see Villarreal making a comeback at home but stranger things have happened in football. Liverpool themselves had that famous night against Barcelona. Emery will have to play his cards absolutely perfectly if they are to progress. Meanwhile, Klopp knows that this kind of performance will be more than enough to make their third final in five years.