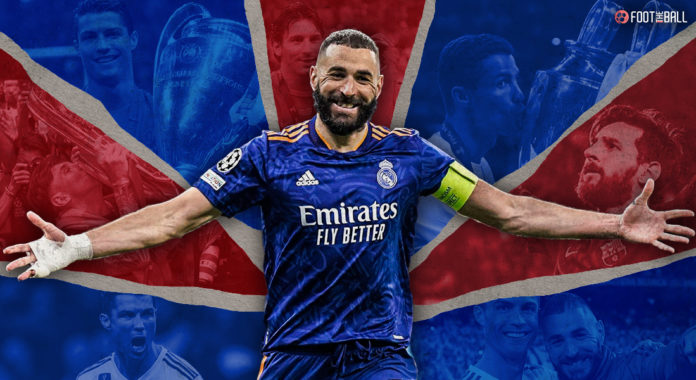 He has only gone and done it again. Karim Benzema aka Big Benz aka Mr. Drip aka the deadliest striker in world football currently. Two goals, including a “cold-blooded” Panenka penalty, have kept Real Madrid’s Champions League hopes alive. Benzema’s brace against Manchester City took him 41 goals for the season across all competitions.

It is the first time the French striker has reached this milestone in his career. Benzema is performing on a different level than his peers which has led him to become one of the favourites for the Ballon d’Or. He has been the key reason behind Madrid all but sealing the La Liga crown.

There are several facets of his game that have helped Benzema rack up so many goals, including 14 in the Champions League.

He is the competition’s top scorer and many argue that he is having the greatest single-player campaign in its history. Those people may have a point.

Karim Benzema has already secured the Golden Boot for this season’s Champions League. That came about due to his explosive nature in the knockout rounds. Benzema netted nine goals in just five matches. All of those have been game-altering contributions.

The hattrick against PSG to drag Los Blancos back from the dead. The hat-trick against Chelsea in the first leg helped them gain a strong lead.

👀 Another hat-trick upon us? 🇫🇷 pic.twitter.com/fa2vHrgEeS

Moreover, his extra-time goal in the second leg helped seal qualification for Madrid. Benzema has been a menace for every opponent. Manchester City would have felt in a comfortable position after taking a two-goal lead but Pep Guardiola was not happy.

It was clear from the Catalan’s expressions that City should have buried the chances that befell them. Benzema’s current form is such that he can score any time and turn the tie on its head.

5 – After his hat-trick at Chelsea and brace tonight v Man City, Karim Benzema is the first player in Champions League history to score as many as five goals away from home in the knockout stages against clubs from a single nation in a season. Ridiculous. pic.twitter.com/o1IdhlwbEI

Therefore, it was no surprise when he scored Madrid’s first goal to halve the deficit. He returned in the second half to punish City from the spot with one of the best penalties ever taken.

Opposing defences have had no answers for the 34-year-old. Carlo Ancelotti’s reliance on his captain is becoming more and more evident. Thankfully for him, Benzema is rising to the occasion every time his team needs a savior.

What makes Karim Benzema such a difficult proposition is his evolution into a complete package. Therefore, Madrid are much more comfortable having Benzema as a playmaker at times. He is dropping deep, linking up play, and spreading passes out wide to fellow attackers. Benzema’s full arsenal was on show at the Etihad Stadium once again.

🔑 Despite Manchester City completing 541 passes, no one made more key passes than Karim Benzema in last night's #UCL semi-final.

He was also our MOTM with a FotMob rating of 8.88. pic.twitter.com/yDDbP70EHs

He was constantly pressuring Ederson in goal, resulting in the Brazilian having a passing accuracy of just 77%. Benzema has perfected this technique which bore fruits against Gianluigi Donnarumma and Edouard Mendy.

Vinicius Jr. has been his best mate, with the pair combining to deadly effect all season. Benzema has provided 12 assists across all competitions, by far his best output ever.

🎙Vinicius Jr: “There are no words to describe how my brother Benzema plays. I hope he ends up winning: La Liga , the Champions League and the Ballon d'Or.” #UCL pic.twitter.com/lIJSb1v0PL

Moreover, Benzema can also drop to the flanks himself which allows the quicker attackers to run through the middle. This kind of improvement in his game has helped Madrid defeat plucky opponents throughout the season. In the games that he has missed, Ancelotti’s side have struggled to break down defences.

🤯 “Benzema opened his body, I thought Ederson was going the right way…dink!”

😍 “Benzema’s first goal is magic! He just knocked the ball towards the goal.”

Ally McCoist praises Benzema’s panenka and his other goal for #RMA vs #MCFC. ⚪️ pic.twitter.com/IBvmUdeS2V

Therefore, it is clear that Madrid need their talisman in full flow which Benzema is proving to be.

The overarching question: is Karim Benzema’s current UCL season the best in the tournament’s history? There is certainly merit to this debate because Benzema’s impact has truly been incredible. He has surpassed Lionel Messi for the most goals scored at the semi-finals stage.

Moreover, Benzema is just three goals behind the best-ever single-season scoring tally. That was set by Cristiano Ronaldo in 2013-14. Benzema is also the first player since Ronaldo himself to score nine times in the knockout stages.

So, do the experts have a point? Well, there have been three top goal scorers who can match up to Benzema’s production.

Karim Benzema. Ice in his veins 🥶

Missed two penalties in the one game against Osasuna. Then dinks his next one against Manchester City.

Robert Lewandowski, Cristiano Ronaldo, and Lionel Messi have the savants for their respective sides. Lewandowski scored 15 goals in the 2019-20 campaign to lead Bayern Munich to the crown. Ronaldo’s incredible goal-scoring has seen him breach the 10+ goal marks seven times.

Messi is not far behind with five such instances. Both of their best seasons ended with Real Madrid and Barcelona respectively winning the trophy.

🔝 Most goals in a single Champions League season:

However, where Benzema edges ahead is his singular importance to the current side. This Madrid side are a fledgling squad in attack with an aged midfield. He has never been at the forefront in such a manner where the team depends on him.

Karim Benzema has been a literal gamechanger in the Champions League. It was his pressing work and sharp passing that led to Madrid starting the comeback against PSG. Benzema was uncontrollable against Chelsea and scored two world-class headers.

City thought they had the game in the bag but up popped Benzema.

Therefore, it is not difficult to see why he has been getting Ballon d’Or shouts. If Madrid manage to win the competition, there is no doubt that Benzema will become the most deserving candidate.