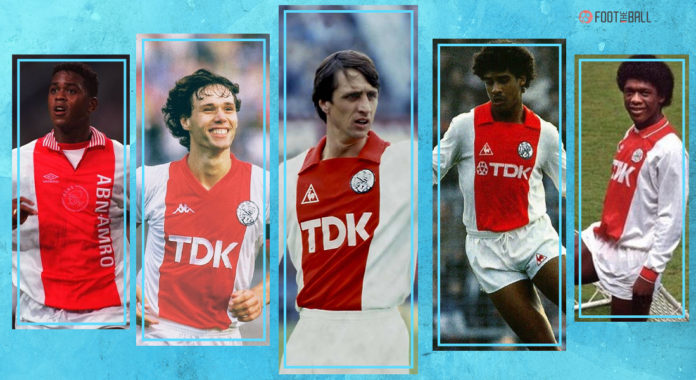 The Ajax academy is one of the most renowned in world football. With the emphasis on developing young talent and fielding homegrown players, they have constantly produced some of the best players ever.

Needless to say, the riches of the Eredivisie are a trifle compared to that of the top-five leagues. Therefore, Ajax heavily depend upon the sales of their academy stars in the future.

That is evident year after year, with Lisandro Martinez and Ryan Gravenberch the latest to leave. Before them came Matthijs de Ligt, Hakim Ziyech, and Donny Van de Beek.

How will Lisandro Martinez fit in at Manchester United? We try and find out

With an array of talents coming through every year, it is no surprise that Ajax are the envy of Europe due to their superb scouting. In that regard, FootTheBall runs down 10 of the best ever players to graduate from the hallowed academy.

One of the greatest strikers of all time who made an everlasting mark at Euro 1988. Van Basten made his debut in 1981 and spent six seasons, winning three league titles.

He was a cheat code in front of goal and remains the third-highest scorer with 152 goals in 172 matches.

Happy Bday, @MarcoVanBasten 🎂
🎁 'Just' 3 of his goals to enjoy! pic.twitter.com/RzywC1j9ua

However, it was at AC Milan were Van Basten really took his game to another level, winning three European Cups and four Scudetto’s. Unfortunately, the three-time Ballon d’Or winner had to retire at the young age of 28 due to repeated injuries.

The left-winger who was one of the members of the ‘Total Football’ espoused by Ajax in the 1960s and 70s. Keizer was a one-club man who played for 13 years with the Dutch giants.

He won 19 trophies during this spell, and was considered at par or even greater than Johan Cruyff. Keizer was an unstoppable force under manager Rinus Michels and Stefan Kovacs. Even Cruyff, in his autobiography, admitted that Keizer was the ideal star in his position.

Ajax’s all-time leader in appearances with 603 matches played. Swart began his career in 1956 and continued till the end of the club’s three-peat in the UEFA Champions League.

Another winger, like Keizer, Swart was part of the golden generation of the previous generation. Ajax were heavily invested in their scouting department who brought them such gems from rival clubs or the lower leagues.

The only player to win the UEFA Champions League with three different teams. Seedorf was a combative midfielder who could open up defences with superb passing. Moreover, his physical prowess made him a no-brainer in terms of impacting the game.

Seedorf was one of the key players in AC Milan’s 2011 Serie A triumph. Here are where the winners are now

He made his debut in 1992 and his final match for Ajax was the incredible 1995 Champions League final. Seedorf remains one of the most esteemed alumni for Ajax.

The game-winner of the aforementioned 1995 final, Kluivert was an instant legend. Kluivert racked up 52 goals in 100 appearances for Ajax with his skilful nature and pacey movement.

Big things awaited him and he left for AC Milan in 1997. However, Kluivert was off to Barcelona after just one season. Moreover, Kluivert was also unstoppable at the international level, scoring 40 times, which was a record then.

The greatest Dutch goalkeeper, Van der Sar was a behemoth in 1995 final. He won four Eredivisie titles before leaving for Juventus. Van der Sar was eventually signed by Manchester United in the 2000s and won four Premier League titles.

His save from Nicolas Anelka in the 2008 Champions League final won the Red Devils their third triumph. Moreover, Van der Sar also remains one of the oldest ever players to played in the English top-flight.

Here’s the full list of the absolute veterans to have played in the Premier League. Spoiler: a lot of goalkeepers

The newly minted Manchester United signing started his career in native Denmark before Ajax snapped him up at the age of 16. Eriksen’s case was another example of Ajax’s dogged scouting who paid off handsomely.

He won three consecutive league titles in his five-year stay in the early 2010s. Eriksen joined Spurs where he became an even bigger star, before winning the 2020 Serie A title with Inter.

He made his comeback to football with Brentford in January 2022 and is now beginning the next chapter of his illustrious career.

The most capped player for the Netherlands national team, Sneijder was a mesmerizing footballer right from day one. He could open up teams with his extraordinary vision and playmaking talent.

Sneijder made his senior debut in 2002, going onto spend five years with Ajax. Moreover, he was awarded the Dutch Footballer of the Year award in 2004.

Sneijder left for Real Madrid, before enjoying another magnificent spell with Inter as they won the treble in 2010.

The hard-nosed midfielder who was the rock of the team in the early 1980s. Rijkaard cut his teeth with Ajax, spending seven years in his first spell.

He won three Eredivisie titles and the 1987 European Cup Winners’ Cup before leaving for AC Milan. It was in Italy that Rijkaard became an even better player under Arrigo Sacchi.

Rijkaard returned to Ajax in 1993 and was one of the more experienced players as they won the Champions League in 1995.

The greatest Dutch player and Ajax player ever. Cruyff was a genuine master of the game, whose principles reached all around the world. The pioneer of ‘Total Football,’ he was the engine room behind the club and nation’s rise as a powerhouse in the 1960s and 70s.

On this day in 1970, Johan Cruyff wore the iconic number 14 for the first time. A number that would forever go down as one of the most famous numbers in the all-time history of football. 🙏❤️ pic.twitter.com/YOeqvUPsod

Cruyff returned to Ajax in 1981 for a two-year stay, having enhanced with legendary status with Barcelona in the meantime.

He won eight Eredivisie titles and three European Cups during his career. Moreover, he also remains Ajax’s top-scorer with 194 goals in 287 matches.