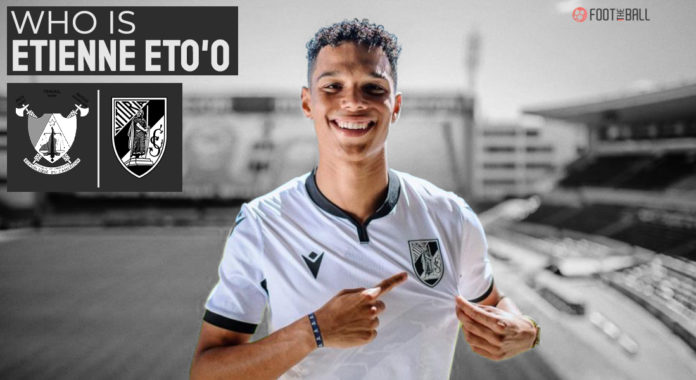 Samuel Eto’o is one of the most revered names in world football. The four-time African Player of the Year had memorable spells with Barcelona and Inter. He currently serves as the president of the Cameroon Football Federation (FECAFOOT).

Therefore, it is no surprise that his children have followed the same path. Etienne Eto’o, one of senior Eto’o’s four children, has just signed his first professional contract with Vitoria de Guimaraes.

Etienne had been training with the youth setup of the Portuguese side since 2021, and is all set to make the next step up in his budding career.

Who is Etienne Eto’o?

Etienne Eto’o is, unlike his father a midfielder by trade. He was born in 2002, when Samuel Eto’o was tearing up La Liga with RCD Mallorca. Etienne started his footballing journey with the youth teams of Mallorca, before leaving for FC Lustenau in Austria in 2011.

Eto’o was a developing every month and year, eventually landing up at Real Oviedo. However, he was released in 2021, and linked up with the Vitoria U23s.

There is no doubt that Eto’o has a lot of learning left, but Vitoria are a solid side to start with. His all-round midfield qualities will really help in the Portuguese top-flight and the UEFA Europa Conference League.

He is an explosive midfielder who definitely knows the way to goal. That was evident during his debut with the Cameroon U20s. At the U20 AFCON in 2021, Eto’o scored twice against Mozambique, including a sumptuous free-kick.

Jong Ajax is one of the foremost academies in the world for producing talent, and here are the 10 best ones ever

That alerted the continent to a special talent that was on the rise. Indeed, Eto’o has all the potential to become a top-player in the years to come.

Vitoria are a strong choice, with the player already familiar with his surroundings. Moreover, Etienne has talked highly of his father, stating,

My dad has played a huge influence in my life because I have always admired him and want to learn from him and continue in his steps. Always I want to be someone like him. I want to try and be better than him and I am always looking forward to stepping on the pitch and giving my best.

As mentioned above, Eto’o was with the Vitoria U23s in 2021-22. He played in 10 matches, scoring two goals. It is clear that Eto’o is not a primary goal-getter, Therefore, it is important to not put that burden on him.

Samuel Eto’o was one of the most apex predators in the game, and Etienne will certainly want to contribute his fair share.

While Etienne Eto’o just begins his career, meet the 10 veteran stars who are playing in their 40s, and 50s!

Moreover, senior appearances could be in the offing soon, as Vitoria prepare to have a busy campaign ahead.

Etienne Eto’o is a skilful baller who can make darting runs upfield. He is a good passer of the ball, whose low centre of gravity and pace allows him to escape opponents.

Eto’o needs to build up his physique but there is no doubt that it will come with time. What has impressed onlookers is his commitment to better himself and always keep pushing. Even being a legend’s son can only take you so far.

ETIENNE ETO’O is the son of Cameroonian legend Samuel Eto’o who currently plays for Vitoria Guimarães.

Frame one is young Etienne with Samuel Eto’o and fame two is Etienne when he was unveiled by Vitoria Guimarães. pic.twitter.com/kPakkE1VOF

Etienne is very focused on the job at hand, which is earning a regular spot in Vitoria’s senior team.

That can be done through strong showings in the preseason, and in the early phase of the official campaign. Moreover, he has also spoken of making a bigger name than his father, stating,

Even though I know it is difficult to be better than my father, I want to work hard to achieve like him. He is always there to support me and give me advice.

Vitoria are regular top-six contenders in the Liga NOS and have a few familiar names in Portugal. Alfa Semedo, Bruno Varela, and rising star Andre Almeida are all part of the furniture.

Eto’o will be hoping to make decisive impact as soon as possible to cement his position as a starter. There is no doubt that the whole of Cameroon will be watching his progress keenly. The name Eto’o comes with its baggage, but Etienne is ready for the challenge.