The kings of sales 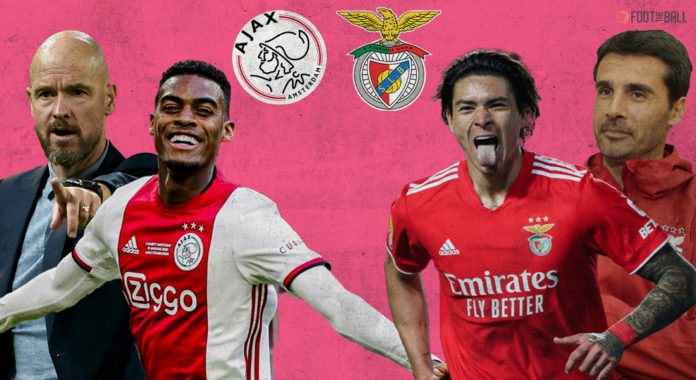 The Champions League throws all kinds of ties for the teams involved. This season has been no surprise with heavyweights going head-to-head along with some great mismatches on paper as well. However, one matchup that looks to be the most even so far is coming up this week between SL Benfica and Ajax.

📊 Highest-ranked clubs from outside the top five leagues in the #UCL, #UEL & #UECL knockout stages:

The path for each team to this stage was different as Benfica split their six matches into two wins, two draws and two losses. Meanwhile, Ajax were a wrecking ball, winning all six of their games, joining a select group of teams to have done the same. But there’s one common trait that has bound the two clubs over the years.

Due to the financial conditions of each, they have been forced to sell their best players to European giants but have still managed to remain extremely competitive at the top level year after year.

The most basic setup for a club that knows it has to eventually sell its best players is to have a world-class youth academy to keep producing future stars. Indeed, both Ajax and Benfica have two of the most well-reputed facilities that have continued churning out stars at an astonishing rate. A report released by CIES in 2021 for clubs having trained the most number of active players currently in Europe saw Ajax come in at number two with 81 players while Benfica found themselves in 8th-place with 60 players trained.

This just further underlines how important the focus on youth players is at these clubs as they know that they will become the stars of tomorrow. Some of the players produced by each club in recent years have gone on to become superstars around the world. The most well-known amongst them currently include Joao Cancelo, Renato Sanches, Bernardo Silva, Ruben Dias, Joao Felix, Frenkie de Jong, Wesley Sneijder, Donny Van de Beek and countless others.

Moreover, both Ajax and Benfica also have their own reserve teams that serve as the perfect stepping stone for young talents. Benfica B kickstarted the careers of Cancelo, Silva and Felix while Jong Ajax’s most recent offering has been last season’s Dutch player of the year in Ryan Gravenberch.

The importance of money

The current footballing system has gotten so askew in favour of the rich and powerful that it’s almost impossible for there to be any shocks in terms of winning silverware. Villarreal were a welcome change from the norm, beating Manchester United on penalties to win the Europa League last season but that competition has been dominated by their rivals Sevilla in recent times. Benfica and Ajax know that their own personal heydays of the previous century are in the rearview but this does not stop them springing up a surprise once in a while.

Most notably, the Dutch giants’ run to the semis of the Champions League back in 2019 was a story for the ages. De Jong, Van de Beek, Hakim Ziyech, Matthijs de Ligt, Andre Onana tore through opponents at will, before eventually falling to a last-minute goal by Spurs. From that great team, only Tadic remains as all the rest were sold for extremely hefty transfer fees of €75m (De Ligt), €75m (De Jong), £35m (Van de Beek), €40m (Ziyech).

When Ajax conquered the Santiago Bernabeu. 😮🔥

All except Ziyech were trained by the club through the various youth levels, and even in the case of the Moroccan, Ajax made almost €30m in profit. Coming to Benfica, they too have had their fair share of profits, with one estimate putting it at €900m over the past decade. The crown jewel in that chest has, of course, been the sale of Felix too Atletico Madrid in 2019 for €126m, a club record that looks unlikely to be broken anytime soon.

Benfica sure knows how to make that profit💰💸 pic.twitter.com/P7t8cpg8SC

Other noteworthy movements include €15.75m (Bernardo Silva), €35m (Renato Sanches), €68m (Ruben Dias), €30m (Goncalo Guedes), and €35m (Victor Lindelof). Clubs like these know that they will have to sell, but the fact that they are consistently able to make superlative profits just goes to show how well they have mastered the art of never failing despite the constant incomings and outgoings.

What can be expected in the tie and beyond?

Coming to the impending two-legged affair, Ajax do seem to hold the upper hand. Erik ten Hag is renowned for his innovative methods and fast style of play while Sebastian Haller has been in a punishing mood. Benfica are in a bit of a flux, having fired Jorge Jesus in December last year and having appointed Nelson Verrisimo as caretaker boss. Their brightest spark is Darwin Nunez, who was the subject of a late bid from West Ham United last month but no deal materialised.

Put some respect on his name. 🦅 pic.twitter.com/7b9PsjYHFr

In terms of the clubs’ business model, it’s really hard to see how they can change it in the coming years. The two respective leagues will not have the glamour or the competitive teams required to win European silverware on a consistent basis so players will be inclined to move on after some years. However, given the fact that they have done just fine with this policy in the recent past, few would bet against them continuing to flourish despite the odds.