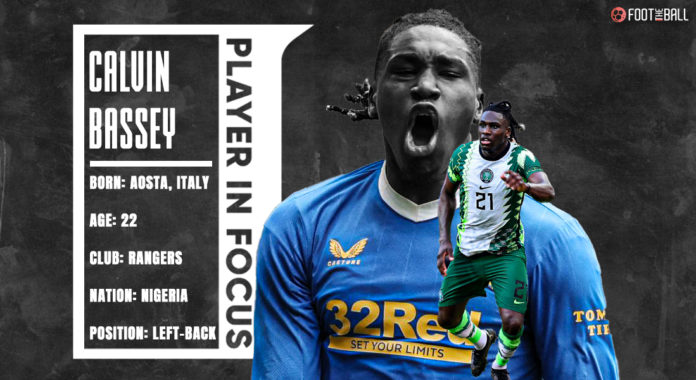 Like 2019, Ajax are again facing a massive exodus of players. The defensive duo of Lisandro Martinez, and Jurrien Timber, the midfielder Ryan Gravenberch, and attackers such as Sebastian Haller and Antony have all either faced exits or are interesting other top clubs. And like 2019, the club will be looking to replace them with another crop of players acting as the next generation stars at the Johan Cruyff Arena. One of the players targeted to fill the void is Rangers’ young left-back Calvin Bassey.

One of the best young players to come out of the Rangers youth system, Calvin Bassey, was on the radars of several clubs this summer. His performance caught the eye of Nigerian football team manager Gernot Rohr who called him up to the national squad.

The youngster made 33 appearances and established himself in the team. He has been deployed at both centre and left back by Giovanni van Bronckhorst. And Ajax have finally landed their man after selling Lisandro Martinez to Manchester United.

So, who is Calvin Bassey?

Born in Aosta, Italy, Bassey started his youth career with the English club Leicester City in 2015. The youngster spent five years at The Foxes before Steven Gerrard convinced Rangers to sign him up. The youngster managed 15 appearances in his first season, scoring one goal.

And when von Bronckhorst took charge at the Ibrox, he made Bassey an integral part of his team. As a result, Bassey made 50 appearances in the season, as Rangers finished second in the league and made their way to the Europa League final. They lost against Eintracht Frankfurt on penalties, but Calvin Bassey had started his ascent to stardom.

A look at the Rangers Europa League run clearly shows that Rangers played an attacking style bordering defensive harakiri. Bassey and other centre-back Connor Goldson and defensive midfielder John Lundstram faced numerous counterattacks on their own. However, almost every time, they would manage to thwart the attack, with Bassey performing the best out of the lot.

Brighton and Ajax will battle for Eagles/Rangers defender Calvin Bassey. The Dutch side sees the Scottish league winner as a perfect replacement for Man Utd bound Lisandro Martinez

The Nigerian was brilliant at tackling, intercepting, and helping his team in pressing the opposition. He is not just a no-nonsense defender and has a method to his madness. His exceptional ball reading skills allow him to time his move ideally to stop the opposition.

He is also a good dribbler and helps his team by advancing the play forward as soon as possible. Von Bronckhorst’s decision to play a more attacking side has inadvertently helped him become a brilliant defender who is at his best in one-on-one situations.

No more Harry Maguire? Here are the top 10 facts about Lisandro Martinez who has signed for Manchester United

We have already talked about how impressive Bassey’s defending is, and the stats prove it. According to fbref, he makes 1.91 successful tackles per 90 minutes, among the top one per cent of defenders. And most of his successful tackles come in the middle of the pitch.

The trend continues when it comes to pressure. Fbref data shows he makes 5.89 successful pressures per 90 minutes again amongst the top one per cent defenders. And his brilliance does not end there.

He makes 2.69 blocks per 90 minutes in 2021/22 and is on par with the best defenders. He is equally good at blocking passes. His 1.76 blocked passes are better than 99 per cent of defenders.

The stats until now show a player who is exceptionally good defensively. However, there are several defensively sound young players out there. So, what makes Calvin Bassey special?

It’s his dribbling. In the last 365 days, Bassey has attempted and completed 1.76 and 0.92 dribbles, respectively. Both these stats are among the top one per cent defenders.

In addition, he dribbles past at least a player every game (top one per cent defenders). Bassey also excels in the art of making tactical fouls.

Iyenoma Destiny Udogie: A player as good as his name

It is no secret that Bassey has a realistic chance to become a future star. He has all the traits to succeed. Furthermore, his deployment at both the left-back and centre-back, instead of hindering his development, has made him a multi-faceted defender.

By playing at centre-back, he has massively improved his defensive game. And at the same time playing at left-back has made him a brilliant dribbler, thus making him a cut above the rest.

We have also seen that apart from talent, experience also helps a player. Calvin Bassey has got that in spades. Rangers’ impressive Europa League run included matches against top teams like Borussia Dortmund and Red Bull Leipzig.

And he can still improve a lot which shows how high his ceiling is.

While there were several clubs linked with Calvin Bassey, Ajax took their chance and swooped in for Bassey. While Bassey may have loved the idea of playing in the Premier League, Ajax are perhaps the best option considering the record of making young players into stars.

The Dutch club has produced two golden generations in three years showing how great their system is. And Ajax also have the cash which they will earn with the sale of their top players.

Ajax are paying €27M in total for Calvin Bassey.

Making him the most expensive defensive signing in the entire history of Ajax. 🇳🇬🌟 pic.twitter.com/jEib9vJDIJ

Replacing Martinez will be no mean feat, but Bassey is one of the few players who might be able to do so. He also fits the Ajax philosophy perfectly as he is a good defender who is not shy of being on the ball.