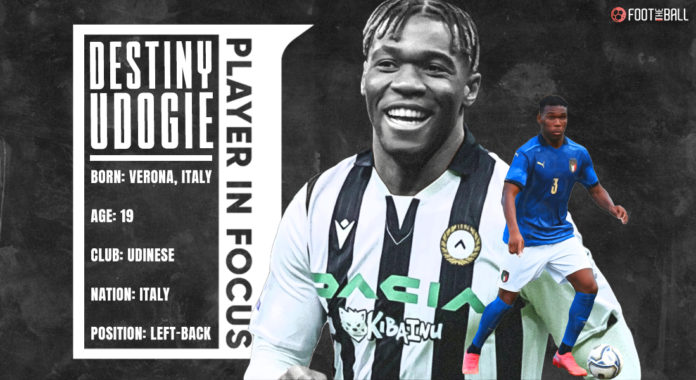 It would be safe to say that Udinese have been the quintessential middle-tier club in Serie A. After finishing fifth in 2012-13, Udinese have not finished above 12th in the following nine seasons. During this time, they have also avoided relegation. For clubs like Udinese, there are few moments of joy. That is until a young talented player comes out of nowhere to establish himself in the team. For Udinese, that player has been Iyenoma Destiny Udogie.

The 19-year-old wingback signed on loan from Hellas Verona has been one of the few bright sparks in another dull season for the club. Making 35 appearances, the teenager scored five goals and provided three assists.

Udinese finished last year in Serie A at 11th with 47 points, another underwhelming season. However, in Destiny Udogie, they have someone who can help the team get better. He was brought on loan, but his performance was so impressive that Udinese bought him for €4 million. So impressive were his performances that Antonio Conte is targeting him to be a part of his Spurs rebuild.

Unlike Vitinha who was snapped  by Paris Saint Germain or Fabio Vieira who signed for rivals Arsenal he has not been part of a title winning squad which makes his performances more impressive.

What makes Destiny Udogie special is his commitment to both attack and defend. And he is brilliant at both these things. Destiny Udogie can block passes, intercept passes, and make last-ditch tackles to win the ball. In addition, he can create chances for his team.

His heatmap from Soccerment shows that he operates in the middle and attacking third of the pitch. The Italian makes inch-perfect tackles to win the ball. And it just doesn’t end there. Destiny Udogie is also a supreme presser of the ball. In addition, he is also brilliant at carrying the ball forward.

His four assists in Serie A are the ninth-best for a defender in the Serie A, showing just how good he is at such a young age. He also wins more than half of his duels during the season. What is impressive is that he has managed to keep his palace in the team under Luca Gotti and his successor Gabriele Cioffi.

His work rate on both ends of the pitch is a quintessential quality in a Conte wingback.

Get ready for magic as Brentford have signed Keane Lewis-Potter

Destiny Udogie is just 19, but his numbers show a player who is mature beyond his age. And he also excels when it comes to Expected Threats (xT). The xT metric measures how threatening a player is through passing or carrying the ball. It is an important metric to analyse a player’s attacking quality deeply.

And the youngster excels when it comes to xT from carries. According to Soccerment, his xT from carries was 0.87, the seventh-best for a defender in Serie A. This is supported by fbref, according to which he averages 0.90 carries into the penalty area, among the top 10 per cent fullbacks.

Iyenoma Destiny Udogie, better known as Destiny Udogie, has been one of the revelations of the 2021/22 Serie A, producing more than his fair share of impressive performances on the left flank for Udinese.@VitoCDoria on Udogie: https://t.co/YTlWdxVLQw pic.twitter.com/FYhgub6T6H

According to Soccerment, he was the seventh-most threatening player in the league through progressive carries. This is an impressive stats for a 19-year-old. Another remarkable stat is his 40 successful tackles, the 16th-best in the league.

So, in just one regular season, the player has established himself as a force in Italy.

Where did you get the money? Analysing Raphinha’s transfer to Barcelona

Any club signing Destiny Udogie would get not only a talented player but also one who has proved his credentials in a top league. As a defender, there is no fire of baptism harder than Serie A, and he has passed it with flying colours. However, his greatest asset is that he is equally good in defence and offence. This will make him more suitable to play in several teams and systems.

There is no better coach to learn the wingback position from than Antonio Conte. Destiny Udogie is a big game player. He has scored crucial goals in the league, like the 1-1 draw with AC Milan and the 2-1 against Sampdoria. With proper coaching, Udogie has the potential to become one of the very best fullbacks in world football.

Destiny Udogie was bound to attract interest from several clubs. However, it looks unlikely that he may change his club for now. The reason is Udinese just made his loan deal permanent on July 1, 2022. Furthermore, the club paid Hellas Verona only €4 million, which looks like a tremendous bargain.

Even this has not deterred other clubs who have increased their interest in the player. Tottenham look to have found a workaround to this issue. Reports say that Spurs will look to finalise his transfer this summer before loaning him back to Udinese for a year. It is another smart move by Tottenham in a window full of them. Be it the signing of Djed Spence, or smart acquisition of Ivan Perisic, Conte’s revolution is in full swing. Destiny Udogie would have found it difficult to come into the first team of Tottenham anyways. Therefore, having his rights but loaning him back benefits all three parties- Tottenham, Destiny Udogie and Udinese.

There is also talk of him changing his nationality from Italian to Nigerian so that he could play in the World Cup. Whatever he chooses, it might not affect his career. As they say, it is written in destiny.