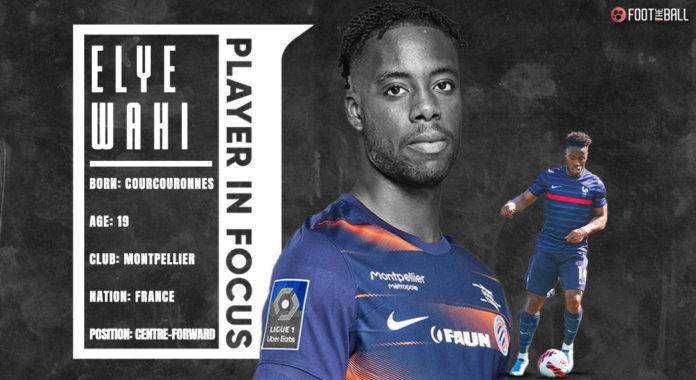 Ligue 1 has been tagged as the ‘Farmer’s League‘, for years but has now almost shed the tag. Instead, the French league has become one of the best in developing young talents in the world. Lille’s Jonathan David, Lyon’s Rayan Cherki, Lorient’s Adil Aouchiche and Dango Outaara, PSG’s Warren Zaire-Emery, and Rennes’ Kamaldeen Sulemana, Reims’s Nathanael Mbuku are just some of the top young guns in the league. After eight matches in the current season, Sepe Elye Wahi looks to be the latest star to come out. Elye Wahi has been an integral part of Montpellier’s attack, which has scored the league’s second-most goals as of now.

Montpellier finished a disappointing 13th last season. However, the club have kept faith in manager Olivier Dall’Oglio. And in the attack, Elye Wahi has been the best, scoring the most goals for Montpellier. However, the team has been let down by the defence, who have conceded 15 goals so far.

Meanwhile, Elye Wahi has been doing what he best: being the complete attacker. The teenager has been a revelation in Ligue 1 and could have the best season of his career with his skills.

So, how good is Sepe Elye Wahi?

How good is Sepe Elye Wahi?

Born in Courcouronnes, a suburb in south Paris, Elye Wahi joined JS Suresnes at seven. This was the same club where N’Golo Kante started his footballing career. He spent seven years at the club, where he would take part in several youth tournaments. Here, he began to get on the radars of several clubs.

And at the age of 13, he joined the football academy at Stade Malherbe Caen. Elye Wahi would destroy the opposition, scoring 89 goals for the under-15s in a single season. After two years in Normandy, Elye Wahi moved to Montpellier in southern France.

After one season in the youth team, he was promoted to the Montpellier reserve team. His talent was quickly noticed by then manager Michel Der Zakarian who promoted him to the senior squad.

The following season, the youngster would have his best season. The 19-year-old scored ten goals and provided two assists, establishing himself as one of the top young players. In fact, he was the third-fastest player to reach ten goals in Ligue 1 behind Kylian Mbappe and Ousmane Dembele.

Data analytics site Soccerment has classified Elye Wahi as an all-round finisher which is what he is. He has already scored four goals in the current season, but his accuracy makes him an even better player. According to Soccerment, he has made ten shots on target, making his goal-scoring efficiency an impressive 40 per cent.

Analysing all his shots in the league this season from Understat, we see an exciting trend. Elye Wahi has taken 17 shots this season, out of which 14 were from inside the penalty box. Out of these, he has only missed one, with the rest either being saved, blocked or ending up in the back of the net. This efficiency level is hard to find, and that too in such a young player.

His efficiency is also backed up by fbref, whose stats show that he is among the four percentile forwards regarding shot efficiency. Wahi has also outperformed the Expected Goals (xG) metric.

As Montpellier play primarily without the ball, they have to be on the defensive. This requires every player on the team to contribute defensively. And Elye Wahi has been impressive. According to fbref, he makes 0.36 tackles per 90 minutes, putting him in the top eight percentile attackers.

Montpellier forward Elye Wahi (19) has been rewarded for his fine form with a first call-up to the France U21 squad.https://t.co/l72IOmkaen

Elye Wahi is a classic fox in the box for shooting. However, it is not the only trick in his bag. He also has the traits of a modern number nine and can create chances for his team. His passing, though, needs a lot of improvement, which he will be able to do as he develops further. In addition, he scored as many non-penalty goals as Neymar last season, which shows how great of a talent he is.

Wahi is only 19, which shows how high of a ceiling he has. Elye Wahi has hit the ground running quickly in his senior career. But fans will need to be patient as he irons out the deficiencies in his game. Due to Montpellier’s gameplay, Elye Wahi is also getting better defensively. He has impressive stats when it comes to applying pressures.

Elye Wahi also has a brilliant vision when it comes to shooting. His high accuracy is due to the positions from where he takes his shot from. However, he needs immediate improvement in passing, which will make him a more rounded forward and automatically raise other facets of his game. His recent exploits have led to a call-up from France’s under-21s.

Very nice contact with the ball. Confident and prolific dribbler too. A goal vs. Monaco today, appears to me as an inside forward.

Montpellier knew the immense talent of Elye Wahi, which is why they moved quickly to renew his contract. However, even the club knows it is a move that will fetch them huge money when he does make a big money move. He only needs to better his previous season’s tally and keep the trend for two seasons, and a big club will come for him. Before the start of the season, Rennes wanted to buy him but baulked at the € 25 million transfer fee.

Newcastle United, Manchester United and Chelsea were also expected to be interested but have not submitted a bid yet. This could also be because he was named in an article by investigative journalist Romain Molina. A few days back, the French journalists who made one of football’s biggest expose accused Elye Wahi of harassing students, which was why he had to leave Caen in 2018.

However, if he can stay away from these troubles, he can surely be one of the best in business.