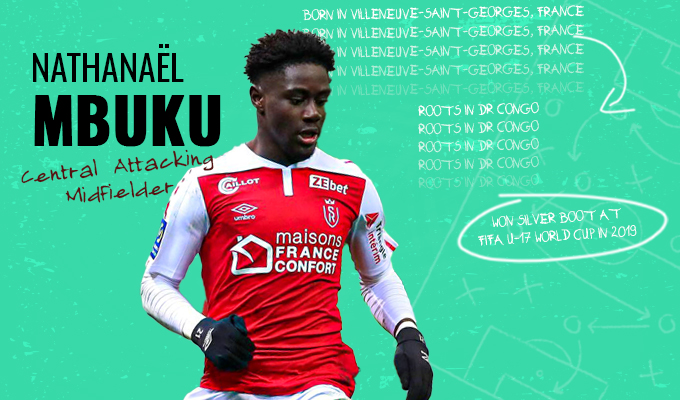 French football, especially Ligue 1 have been producing some of the brightest talents for over a decade now. From Karim Benzema and Eden Hazard to Ousmane Dembele and Kylian Mbappe, and now more recently the likes of Adil Aouchiche and Nathanael Mbuku, French football never disappoints in terms of generational talents(Yes, we said it!)

This recent crop of players who have come out and shone from their respective academies for their boyhood clubs have been really pleasing to the eye. We’ve already briefed you about football’s next-gen Kevin De Bruyne – Adil Aouchiche – who played alongside Nathanael Mbuku in France U17 and U19’s. There’s Lucien Agoume who impressed at Brest on loan from Inter, PSG’s Ayman Kari and many more. One player flying under the radar is Nathanael Mbuku.

So who is Nathanael Mbuku and why is he regarded so highly by not only his club and French Football but also the rest of Europe?

The 20-year-old winger is already a regular starter in Ligue 1 after having shone for France in age group level football.

A versatile attacking midfielder, Mbuku won the silver ball at the Under-17 World Cup in 2019, having scored a hatful of goals. Brazil won the tournament, but the Frenchman put himself on the map as a player to watch.

Promising young winger Nathanael Mbuku, the next big thing at Stade de Reims, also had extended his contract with his boyhood club through to 2023.

A nice birthday present for Nathanael Mbuku was that, two days after celebrating his 18th birthday, the winger from Stade de Reims extended his contract through to 2023. Having appeared 11 times in Ligue 1 Conforama during the 2019-20 season, the young left-sided winger switched from the No. 33 to the No. 21 jersey.

Mbuku made his debut in the top flight on 10 August, 2019 – when Reims won 2-0 in Marseille on the opening day of the season – at the age of 17 years, 4 months and 25 days. The same summer, he shone with France in the U17 World Cup in Brazil, finishing third and taking home the silver boot with five goals scored in six games, including a hat-trick against Australia.

This contract extension was greeted with great satisfaction by President Jean-Pierre Caillot, convinced of the great potential of his young player.

Mbuku got regular game time under Reims coach David Guion. Still very early on his career, Mbuku was in a great position of starting Ligue 1 matches.

Having made his senior debut on the opening day of the 2019-20 campaign, 18-year-old Mbuku had to wait over 14 months to find the net for the first time in Ligue 1. It was worth the wait.

With Reims already 2-0 up against 10-man Montpellier in October 2020, Mbuku chased down a dropping ball in the area, beating an opposition defender to it so as to keep the attack alive before producing an outrageous overhead-kick to put the result beyond doubt.

It remains the crowning moment of a young career that many predict will see him reach the very top of the world game.

Nathanael Mbuku has made a total of 78 appearances so far in his Reims career. He has amassed a total of 4,555 minutes with six goals and three assists. He had an underwhelming 2012-22 season, amassing only two goals and an assist in 31 league appearances.

He averaged 1.52 shots per 90 with a mediocre key pass rate of 0.91/90 minutes during his debut season. Nathanael Mbuku had an xG 1.92 which is quite decent and an xA of 1.89 which stands decently as well.

His progress has somewhat stalled a bit with time. After getting career highs in goals and assists during the 2020-21 season, he took a step backwards last season. Still only 20, he has time on his side.

Born in the south Parisian suburb of Villeneuve-Saint-Georges, Mbuku moved between a whole host of semi-professional and amateur clubs in the capital before eventually joining Reims in 2017 as a 15-year-old.

“I was a funny child who took joy from life,” the teenager told France Football of his upbringing at the end of 2019. “I had to force my dad a little to let me play football. I pulled his ears a bit and said ‘Daddy, sign me up for football’.

“He said ‘OK, on one condition: get good grades at school’. I gave it my all at school and he ended up signing me up. He surprised me. That day, I was so happy.”

His wish granted, Mbuku has been impressing onlookers ever since with his willingness to be direct in possession while giving opposition defenders headaches with both his pace and quick feet.

Nathanael Mbuku has been quite versatile for a teenage footballer. He can play across multiple positions. In less than100 senior appearances, Mbuku has already played as a striker, on either wing as a winger and midfielder, as well as a No 10. While such versatility has undoubtedly helped him get games early on in his career, it has held him back too. Inability to nail down a singular position has led to his attacking output suffering. Therefore, his raw stats don’t do justice to the quality of the player.

Nevertheless, big things are expected for the young attacker. Get French Football News described Mbuku as Reims’ “next starlet” and that he’s lightning-quick, and has no problem taking the ball on from his own half.

It was against Marseille in August 2019 that he took his first steps into the senior game, with Reims boss David Guion introducing him as a 73rd-minute substitute at the famous Stade Velodrome.

“When we went out to warm-up, I was just looking at the stadium,” he recalled to Telefoot. “My teammates made fun of me because they had already played there, but I was just discovering it and it was beautiful.

“Around the 60th minute, the coach sent me to warm-up and said ‘you have two minutes’. I realised that I was going to make my debut at the Velodrome – it was amazing.”

It was while away with France at the Under-17 World Cup in November 2019, however, that his talents truly began to show themselves, with the wideman scoring five goals in six matches – including a hat-trick against Australia in the last 16 – as Jean-Claude Giutini’s side secured a third-place finish in Brazil.

That was enough for him to earn the Silver Boot as the tournament’s second-highest goalscorer behind Ajax and Netherlands forward Sontje Hansen, with Selecao legend Ronaldo the man tasked with handing over the prizes at the culmination of the final.

“This competition was an incredible experience, especially in Brazil, the country of football,” Mbuku told France Football. “I came back full of dreams, full of beautiful memories.

Mbuku spent his youth career at several lower division clubs in France before completing his development at Stade Reims.

After impressing for the club’s reserve side during the 2018-19 campaign, the youngster made his professional debut in Ligue 1 against Marseille last term.

Mbuku continued to make sporadic substitute appearances in the early weeks of the campaign before earning his first start in a famous 2-0 away win over Paris Saint-Germain.

Just like any young player, his journey in senior football has been full of ups and downs. He has spent long stretches on the bench, then long stretches where he is the first name on the teamsheet.

“For three weeks or a month, he’s been the best in training, there is no question,” Guion told reporters following Mbuku’s memorable goal against Montpellier. “He deserves it through all his training, that’s also where you gain your place.

“What I criticised him for was lacking in efficiency in his actions, and very slowly he is taking a little more care. We who see him in training, we are not surprised to see him emerge.

“He is able to destabilise any defender, either running inside or outside. He’s a young player who needs to be well looked after and who needs to keep working.”

Nathaneal Mbuku isn’t quite the finished article at 20 and still has plenty of room for improvement. Having been involved in just three goals in 31 league appearances for Reims last season, the nippy winger has some way to go to before he realises his vast potential.

The teenager has established himself in a more prominent role at Reims, making 63 league appearances in the last two seasons.

Mbuku looks to be an exciting talent, who is willing to work hard on his talent. He has predominantly played on the left-wing for Reims. But he is also comfortable playing up front. He scored seven goals in just 11 appearances in his first year in France’s under-18 side.

If Mbuku does keep working, then the sky is the limit for potentially the most talented young footballer to emerge out of Reims in decades.

The French teenager has already established himself as a first-teamer at Reims and looks set for a bright future in the game. That he has been playing regularly in one of the elite leagues in Europe, despite being just 20, speaks volumes of his talent and potential.