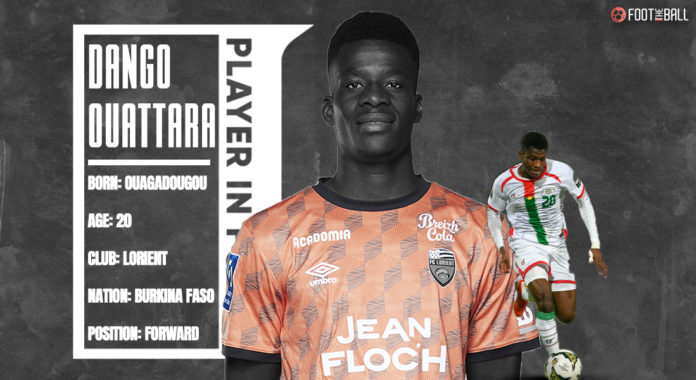 French football has become a household name for producing and attracting young talents from across the globe. From Rennes bringing through or boasting the likes of Kalimuendo, Loum Tchaouna, Lesly Ugochukwo, Kamaldeen Sulemana, Martin Terrier, Lovro Majer and Camavinga to other French teams developing young stars like Lois Openda, Adil Aouchiche and Nathanael Mbuku, Ligue 1 has proven to be a great developing ground for youngsters.

Another up-and-coming player that is sending shockwaves around the football world is Dango Ouattara from Lorient. The Burkina Faso international recently moved to the French club from Club Brugge and has immediately made an impact. In 7 matches he has 3 goals and 4 assists along with 3 man of the match performances.

Clubs have not yet seen the full potential of the explosive forward and Lorient might have scooped a gem from the hands of European elites. But how good is the attacker and is the initial hype around him worth it? FootTheBall has all you need to know about the second youngest goalscorer in Lorient’s history.

20 years of age. One of the biggest stars of that FANTASTIC Lorient team. 🟠⚫️🇧🇫 pic.twitter.com/yhh2qW2Z7m

How good is Dango Ouattara?

Dango Ouattara is a 20-year-old Burkina Faso international who plays for French top-flight club FC Lorient. The speedster has been playing for the French club since 2021 and had often played a part as a super-sub in the 2021/22 campaign.

The start of the 2022/23 campaign has been somewhat different. Ouattara has played an important part so far rather than a bit par bench role. The difference this season has been that he starts games from the off and that has been reflected in his output.

The 20-year-old made his senior football debut for Burkinabe club Majestic FC in 2019. He made 11 appearances for them scoring 5 goals in the process. The net season in 2020, Lorient took notice of his potential and made sure they got their man. Ouattara made his senior debut for Lorient in 2021 making 21 appearances, scoring 1 and assisting 2 goals. Ouattara has so far in 7 appearances made a blistering start with 7 goal involvements already. He looks set to finish the season with 15+ goal involvements barring any injuries and elite clubs from the rest of Europe will surely have taken notice.

Looking at some surface-level stats, Ouattara has 4 goals and 6 assists in 32 appearances for Lorient. While those might not be elite level numbers, the winger has more to his game than just scoring and providing for his teammates.

Looking at the 2022/23 data, the Burkinabe has 17 shots with just 6 on target, which concludes a success rate of 35.3%. As mentioned before, the winger is more than just about goal contributions, hence these numbers should not put off any potential suitors. With 12 chances created, it is mainly his teammates that have let him down so far by not getting on the end of the quality he provides.

His attempted duels and duel success ratio stand at 82 and 51.2% which speaks so much about the player. Despite standing at just 177cms, the winger has attempted 21 aerial duels, with a success rate of 47.6%. His defensive duties have made him a perfect option for those playing with a counter-pressing style of football and managers like Jurgen Klopp must have already sent scouts to eventually land an official bid on the player.

The Burkina Faso international on paper is an explosive winger and can drop his shoulder to get past his opponent in no time. Like most modern-day wingers, Ouattara also uses his raw pace to dribble past his opponent and that makes him pretty much a one-dimensional attacker.

Players with excellent dribbling skills do not always necessarily have the passing range and vision compared to someone like Lionel Messi. Dango Ouattara is one of them. The 20-year-old lacks the vision to set up a cross or pass once he dribbles past his opponent much like when Riyad Mahrez had initially joined Manchester City. The Algerian cut inside from his right-foot on the right-flank under Pep Guardiola, only to release a shot. This kind f one-dimensional play made him quite predictable and as a result, suffered from Pep’s rotation policy.

He eventually improved his game under the tutelage of Guardiola and is now one of the best attackers in the world, let alone the Manchester City squad. Dango Ouattara must take a few notes from the development of the Burkinabe and learn that good coaching will eventually get the best out of any player.

Ouattara has made a dream start to his only second season in the French top-flight. He looks like a winger that is tailor-made for someone like Klopp’s Liverpool. Although, any bid that will be proposed for the Burkinabe will have to be a big one.

No teams as such have Ouattara on their radar so far, but it is only a matter of time until he catches the eyes. If he continues the way he has started the 2022/23 season, there is little doubt that the Lorient winger will not earn himself a big money move in the future.