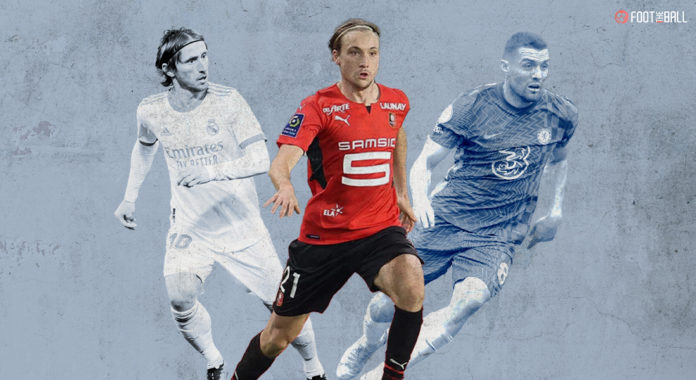 Croatia in recent years has produced some exceptional modern midfielders. They are more than usually blessed with an excellent work ethic which compliments their technique and versatile skill set. The likes of Luka Modric, Mateo Kovacic, Ivan Rakitic and Marcelo Brozovic come to mind instantly when talking about Croatian midfielders, their quality over the years has been considered elite.

🤔 A new international star for Croatia?

Lovro Majer seems to be the next in line to be a midfield maestro from Croatia. Much like his idol Luka Modric, the 24-year-old graduated from Dinamo Zagreb’s famed academy.

Majer got his first big move in the summer window of the 2021/22 season and made a switch to Stade Rennais in Ligue 1.

Although he had a difficult start to his tenure at Stade Rennes, Majer turned up the quality as the season went on. He finished with six goals and eight assists in 29 league appearances. A slow start due to a period of adaptation, followed by world-class quality- the similarities with Luka Modric’s career are endless.

Lovro Majer has been PHENOMENAL this month so far.

The influence of Modric on Majer is clear to see and their on-field resemblance is sometimes uncanny. They also have the same initials coincidentally, LM.

This season Lovro Majer’s stats reflect his capability to fulfil the 8/10 hybrid role or the mezzala role for the best managers and the best teams. Linking up the defence with the attack is his best trait and after adding goal-creating actions to his game, his quality has gone up another level.

When he was bought in he was seen as a replacement for the Madrid-bound Camavinga but he possesses more attacking threat than the French starlet, who was seen as a modern number 6. Although Camavinga himself has transformed into a true box-to-box player for Real Madrid, Majer could follow him to Los Blancos soon and recreate another version of the Kroos-Modric axis, all made in Stade Rennais!

A deeper look into Majer’s numbers shows us that he is truly a jack of all trades and a master of them too. With an expected assist ratio of 0.28/90 minutes, he has undoubtedly been helped by strong finishing from his teammates. However, with an equal number of key passes and shots per 90, at 2.20, it shows that Lovro Majer is equally adept at creating goals as well as scoring.

Lovro Majer’s numbers in terms of progression are impressive too. He completes 7.2 progressive carries and successfully receives 4 progressive passes, which makes him an elite baller carrier through midfield.

His progressive passing could improve which is average at worst with 4 only progressive passes. He also completes about 2 dribbles per 90 which rank him in the top 5% of midfielders around Europe.

Not just midfielders, Croatia’s next generation has some truly world-class defenders. At the top of that list is Josko Gvardiol

What makes him truly stand out are his pressure numbers. Majer is a pressing machine with almost 24 pressures per 90, evidence of his crazy work ethic. Much like all tenacious Croatian midfielders before him, Majer does not mind doing the dirty work too.

He makes about 3.5 tackles and interceptions per 90, not a bad figure for such a creative player.

Majer is the perfect embodiment of the modern 8/10 hybrid. His immense work ethic, flawless technique and versatility make him an exciting prospect for major European clubs.

Especially teams in search of creativity and an elegant ball carrier through the centre of the park should pounce on the first opportunity they get to bring him. However, with the rate at which Majer has improved, and with the clubs he’s linked with, he might end up at the place where his idol shows no signs of stopping.

Although there are no doubts regarding the quality of the likes of Rakitic and Kovacic, Modric has been Croatia’s best player over the last 10 years and probably ever. Lovro Majer’s displays this season have surely made him heir apparent to the 2018 Ballon D’or winner’s throne.

Fantastic 30’mins for 🇭🇷 Lovro Majer. Two assists 🅰️🅰️ already and he was amongst the demolition of Lyon. 🔥

The stylistic similarities between Majer and Modric are uncanny. An attacking midfielder who can slot in as a 8. A midfielder who is comfortable on the ball, and can dribble through tight spaces with ease despite the pressure from opposition .

Lovro Majer emerges as a potential heir to Modric for Croatia: https://t.co/VAKX8OhNq6 pic.twitter.com/ZTxZH96YO1

He moves his team forward through the centre of the park. Much like Modric, Lovro Majer is vicious when needed and his grit will surely push him to emulate his idol.

In fact, his dead-ball delivery is more similar to De Bruyne’s, a supremely flattering comparison but not a false one. Something Luka himself has been average at.

Reports have already started circling about the Madrid giants being interested in his services. Majer falls right in line with Real Madrid’s new transfer policy too. The Spanish club no longer buy Galacticos, they make them. Who better to target than the heir apparent to the last big Galactico they made, Luka Modric?