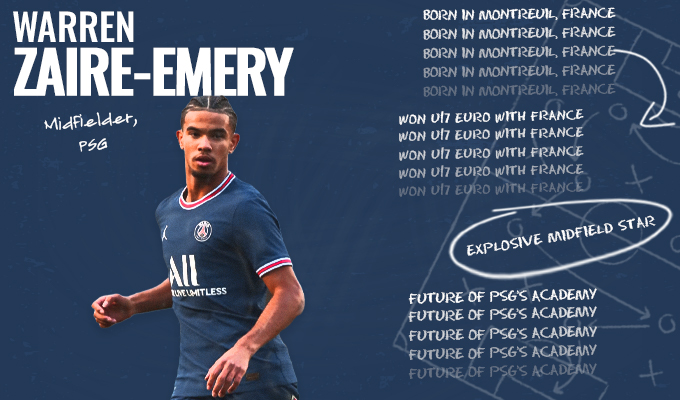 PSG are filled with superstars. Of course, their irresistible frontline takes the cake, but the whole of the team is world-class. However, that has come at a cost. PSG have never seriously taken to allowing young talents in the first-team.

The likes of Christopher Nkunku, and Kingsley Coman have found success elsewhere. On a level, it makes sense, given the embarrassment of riches they have. However, that looks set to change through Luis Campos-led youth revolution. New manager Christophe Galtier is also not afraid of throwing youngsters at the deep end. To that end, something amazing happened in PSG’s first league game in the 2021-22 season. Yes, Messi scored brilliant goals, but a new youngest debutant record was set for PSG. Young Warren Zaire-Emery made his PSG debut aged just 16 years and 4 months. The youngster looked unfazed. It finally looks like PSG have one of their own in their star-studded squad.

The teenager is also now the youngest goal scorer in the history of PSG. The Frenchman scored against Montpellier in the dying minutes of a league game in Ligue 1. Warren Zaire-Emery is a shining star from the PSG academy. He shone in the club’s preseason too. There are huge expectations from a player many consider a generational talent.

Therefore, it makes sense for Christophe Galtier to integrate into the first team over the coming months.

First things first, Warren Zaire-Emery was born in 2006! Yes, the wonderkid is only 16-years-old. He is way younger than new signing Hugo Ekitike and returned loanee Arnaud Kalimuendo.

PSG drafted him into their youth academy in 2014. Before that, Zaire-Emery was shining for Aubervilliers in the French lower divisions. Football ran in the teenager’s blood, with his dad having played for Red Star.

Therefore, there was no doubt that Zaire-Emery would make it big. However, the pace at which he has matured and honed his skills has taken everyone by surprise. Zaire-Emery was regularly playing for youth teams above his age.

The youth coaches could not regard him highly enough, and it was the 2021-22 season that truly saw his stock explode. Zaire-Emery was chosen to play for the U19s at the age of 15.

True to form, he did not disappoint, throwing up several starring performances in the UEFA Youth League. Moreover, he take that good form with him to the U17 Euros in mid-2022 which France ended up winning.

Zaire-Emery has delivered every time when called upon, and his form with PSG in the preseason only earned him more plaudits.

Warren Zaire-Emery is a defensive midfielder so his talent cannot be measured in goal contributions only. Zaire-Emery had one goal and assist in the UEFA Youth League, with both coming in the final group-stage game against Club Brugge.

PSG were down 10 men and trailing 2-0 at halftime. Zaire-Emery’s virtuoso show helped the Parisiens steal the win and qualify for the next round. Given that he plays behind the attacking third and midfield, his overall impact on a game is the best way to gauge his effectiveness.

On a more recent note, Zaire-Emery scored a spectacular goal in the semis of the U17 Euros against Portugal.

During PSG’s pre-season, he started the match against Urawa Reds, racking up a 90% passing accuracy and six ball recoveries with four interceptions in 74 minutes.

Started for the first-team of PSG at the age of 16. No surprises when we talk about Zaire-Emery. 🌟 pic.twitter.com/65dOXKdOfL

Therefore, it is clear that there are a number of areas that Zaire-Emery could impact in a match. PSG know that having such a well-round young star is imperative to realize the vision of the future.

As mentioned above, Zaire-Emery is the second generation in his family to play football. His father, Franck, knew his son’s potential when he was just a toddler. Speaking to RMC Sport, the former player revealed,

“There was a ball coming towards me, and I clipped a 30-yard pass in the air towards Warren, who cushioned the ball on his chest as if he had been practising it every day.

“Me and my cousin looked at each other and we said: ”That’s not bad at all!'”

Given that Franck was an amateur coach himself, Warren had a lot of chances to experience football first-hand from an early age. He was always the most impressive despite being younger than 10-years-old. As Franck put it himself,

“I had the adult players do drills and sometimes when they couldn’t do it right, I would ask Warren to show them how to do it, even though he was only nine years old!”

It was around this time that PSG signed him and Zaire-Emery went straight to the U11s. It was not long before the coaches were left floored by the player’s immense talent.

Therefore, it is clear that Zaire-Emery has been touted and followed for a long time before the world finally saw his huge potential.

A lot of things. Zaire-Emery is the perfect disruptor who can switch defence-to-attack in a few passes. He is technically astute and uses his physicality brilliantly to hold off opponents.

Check out: Who is Joao Sacramento, the most high-profile assistant manager in the world, now at PSG?

Moreover, he can also win back the ball in most situations by running back or putting in a perfectly-timed challenge. As a former youth coach put it,

“We felt that him being there was becoming counterproductive for the team, because when the ball was lost, Warren compensated for everything, rebalanced everything and the other players made less effort.”

One of the best things about Zaire-Emery is how he is always present around the ball. No matter the situation, teammates can find him with ease which helps take pressure off of them.

Zaire-Emery reads the game superbly which allows him to be present at the critical areas. He has shown great temperament to channel his desire to improve every match. That should see him have a long and extremely fruitful career.

PSG’s season lives and dies with their ability to win the UEFA Champions League. Therefore, Zaire-Emery could get a lot of minutes in the domestic league, as PSG rotates to keep their stars fit for the UCL.

Galtier has already shown how highly he rates him, now it’s up to Zaire-Emery to prove him right. Going by his performances, Zaire-Emery’s ascension to stardom is a matter of when, not if.