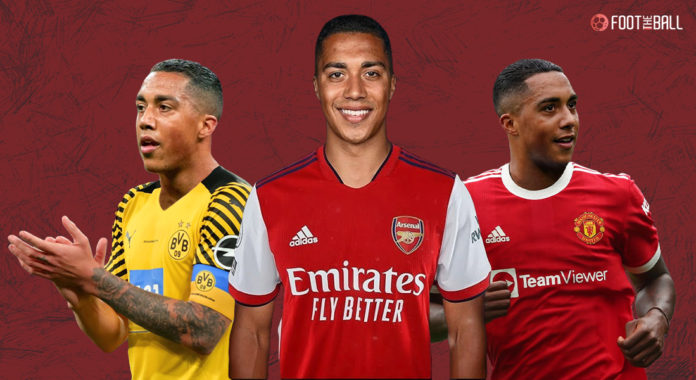 Youri Tielemans has been one of Leicester City’s best player ever since his signing in 2019. The Belgian midfielder can play in a variety of positions, alongside scoring and assisting. In 2021-22, Tielemans recorded six goals and four assists in the Premier League.

However, his most memorable moment was scoring the winner in the 2021 FA Cup final against Chelsea. Nevertheless, Tieleman’s future with the Foxes is in severe doubt. His current contract runs out in 2023 and talks of an extension have been muted.

In fact, even Brendan Rodgers does not seem overly optimistic that Tielemans will remain. Therefore, Leicester can look to cash in on him when the chance is there.

But who could be a great suit for the box-to-box midfield machine? FootTheBall details the five best possible future clubs for Tielemans in Europe.

The club that is most-often linked with Youri Tielemans. The Gunners are having a strong preseason and have made some solid signings since last year. Martin Odegaard and Ben White have been two of the brightest spots.

Youri Tielemans has made his call to leave Leicester City & is looking for a move, preferably to Arsenal.#LCFC #Tielemans #Transfers pic.twitter.com/x73baJCC0x

Mikel Arteta has further strengthened his side by signing Gabriel Jesus to the attack force. However, the Gunners still look light in the centre of the pitch. Granit Xhaka and Thomas Partey are the first-choice options, but there’s not much help otherwise.

Fabio Vieira has been brought in to supplement core. Tielemans would add a solid, dynamic presence behind Odegaard and the front line.

Arsenal have the finances to get a deal done. Therefore, this move makes sense as the player would get to play in Europe too.

The German powerhouse have let go of Axel Witsel and are in talks to sell Emre Can too. Jude Bellingham is a generational talent but he needs able support. Youri Tielemans could prove to be the addition they need to get close to Bayern Munich.

Tielemans has vast experience of playing, including Europe. Eden Terzic could definitely use someone of his talent to lead a post-Erling Haaland era.

Dortmund have already signed Karim Adeyemi and Niklas Sule, so Tielemans will be in their budget. A taste of the Bundesliga could also help the player with the 2022 FIFA World Cup on the horizon.

Despite adding Christian Eriksen, the Red Devils still need more midfielders. They only have Fred and Scott McTominay in the defensive double pivot. Erik ten Hag has tried youth players in midfield, but it is unlikely they would see full matches.

Man United's interest in Tielemans is genuine, too, and growing. He's a far cheaper and less complicated option than Frenkie de Jong. Erik ten Hag has put him on a midfield shortlist. Tielemans indicated under Ralf Rangnick he didn't want to move to #MUFC but ten Hag may revisit.

Therefore, Tielemans would be an astute signing who would improve the team immediately. He can setup attacks, win the ball back, and score from a variety of positions.

Ten Hag has always been keen on having an energetic presence who could impact a match heavily. Tielemans would be the perfect addition to a rebuilding squad.

The Old Lady have more pressing concerns surrounding their defence, but Tielemans will be a welcome addition. Juventus are in talks to terminate Aaron Ramsey’s contract, while Arthur has been severely underwhelming.

Weston McKennie is still adjusting to life in Serie A. Adrian Rabiot blows hot and cold. Paulo Dybala has left for Roma.

The return of Paul Pogba, and the dominating nature of Manuel Locatelli are clearly the highlights. Tielemans would be an instant first-choice in this setting, making one of the most formidable midfield trios in Italy.

A left-field signing which could end up working out really well. Chelsea have had a tough preseason, with Thomas Tuchel publicly calling for more signings. However, progress has been slow, despite the additions of Raheem Sterling and former Napoli defender Kalidou Koulibaly.

It may look like the midfield is not a priority, but Tielemans will be a superb compliment to Mateo Kovacic. N’Golo Kante will remain the defensive screener as Mason Mount remains the attacking midfielder.

Chelsea fight on all fronts in every season, so having Tielemans will only benefit the squad. Tuchel knows the importance of a proven talent, which could really help them take the next step.