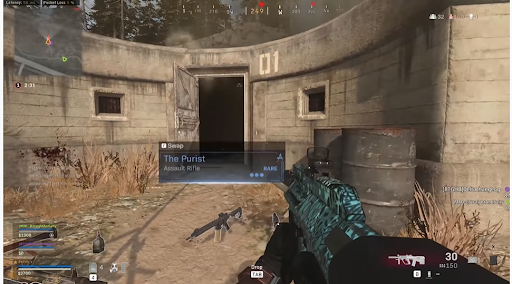 Footballers and gaming- It’s a dream duo that is gaining more and more prominence in digital times. We live in an age where James Rodriguez finds out about his team’s next opponent while playing on Twitch. Sergio Aguero knows about Lionel Messi leaving Barcelona while playing as well.

Along with COD: Warzone, there are many other top esports games that have caught the attention of footballers streaming on Twitch. Without further ado, here are the tips to help you ace the game in Warzone.

It might sound strange advice to take a look at the hotspots, especially when most gamers advise new players to stay away from such locations but hear us out first. Yes, the chances of getting killed are much higher in these hotspots in comparison to other areas, but these places could be an excellent chance for you to find great loot. But, if you are entirely new to the game, do not go directly into one of the hotspots, instead, go for a safer location, find some weapons first, and then head to these hotspots.

Get a UAV ASAP

While having a powerful weapon and enough ammo is essential to get ahead in the Call of Duty: Warzone, one more piece of equipment you need to get as soon as possible in the game: a UAV. A UAV is something that many new players keep on neglecting throughout the game until they realize its value the hard way. Many newbies do not know what to buy with all the cash they have earned throughout the game and keep on buying frivolous items while neglecting what’s genuinely important to them. So, never make the mistake of underestimating the advantages of a UAV; it can change the course of the match in your favour.

Start killing enemies before even landing.

Want to start the match at a good pace? Or want to increase the number of kills in the COD Warzone? Remember, every player you kill at the beginning of the round makes it easier for you to win later on. So, do not wait for the opponents to even land – if you have the gun, start shooting your enemies while they are still in the air. You can also close your parachute for short seconds to attack your opponents before redeploying it and continuing the match as you would typically do.

Unless you are god gifted, the perfect headshot is something you can make only after much practice. Start practising aiming regularly to develop muscle memory, which helps in sharpening your skills furthermore. While playing a match, try to focus on tracking and centring on landing a precise aim. As a newbie, landing a perfect headshot can be tricky, so instead of going for the head, try to aim at the body. Do not settle for the default settings; keep adjusting settings and sensitivity according to your gameplay to improve your aiming skills.

Aimbot for a precise aim

Struggle with taking a precise aim in COD Warzone? Worry not; you are not alone! As a beginner, taking accurate aims during gunfights is quite hard, but there is something that can help you out: an aimbot. If you are new to the game, still learning its ins and outs, and practising your aiming skills, you can start with an aimbot and remove it later on after gaining confidence in your skills. Not only does it help you take a precise aim, but it also helps you quickly understand the game mechanics and various other aspects.

Stick to your squad

As a newbie, it is best to play in a team until you are confident enough to go solo to win many gunfights. Sticking to your squad can help you survive and even win many gunfights if you are still getting used to the COD Warzone mechanics. Keep communicating with your teammates using group chats and pinging features about the location of the enemy.

Gunfights in COD Warzone are the most challenging part and can take an ugly turn most of the time. Try these warzone cheats to gain victory over gunfights that once seemed impossible to win.