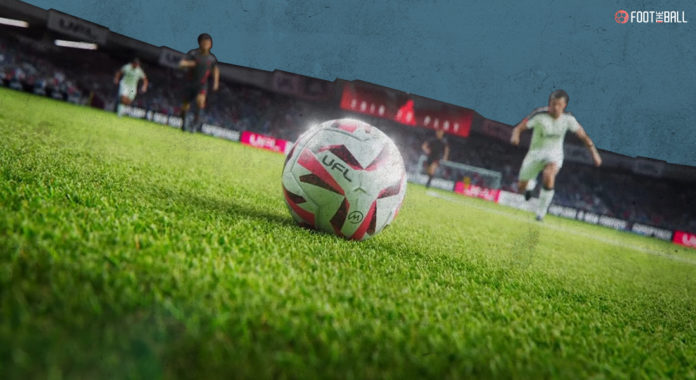 There’s a new sheriff in town across the gaming industry of football. For decades, FIFA and PES (now eFootball) have been setting the benchmark in football gaming. Though eFootball fell off the pace massively with their free-to-play launch and extremely odd graphics, FIFA has kept going strong despite the technical problems that have been reported from its latest installment. However, the landscape is due for a shakeup soon with the announcement of a debutant.

United Football League, marketed as the UFL and produced by Strikerz Inc. released the trailer in January for an upcoming game that has really got the internet buzzing. There have been talks ongoing already of how the game might be and what to expect, but nobody was ready for the levels it has already reached before the launch itself.

Why is there so much hype?

First of all, the names that have already been signed up as ambassadors of the game are at the top of their level. Oleksandr Zinchenko, Bobby Firmino, Kevin De Bruyne, Romelu Lukaku are already a starcast that can make any venture successful but UFL were not done yet. Cristiano Ronaldo was unveiled as the latest ambassador at the end of January, days after the trailer came out, sending the footballing world into a frenzy.

Thrilled to join the football gaming revolution with @UFLgame bringing the new #fairtoplay experience to football gamers worldwide! See you in the Game soon! pic.twitter.com/RwhgcrRotJ

Signing up the player with a plethora of records to his name and 400M+ followers on Instagram virtually guarantees success. Not just players but UFL has also tied up with football teams across Europe for some months now in preparation of the game’s eventual release. The names are as varied as one would expect, with UFL intent on spreading their word as far as possible to generate the maximum buzz. West Ham United were the first to make the jump, followed rapidly by Shakhtar Donetsk, Sporting Clube de Portugal, AS Monaco, Rangers, Celtic, Borussia Monchengladbach to make up the current brood, and of course, there are plenty more to come.

Furthermore, UFL has also partnered with charities, esports competitions, and taken out public ad campaigns to get the news out to more and more people. So, given the backing that the game has already received through some of the biggest names in football, what kind of information regarding the gameplay itself is out in the public domain?

What can be expected from the game?

At this point, little is known about how the interface and gameplay will be. The graphics in the trailer and subsequent video clippings are promising, with fluid movement and likeness of players. There are several game modes including the offline and online mode, ‘flagship’ mode which will be their unique offering and special missions, challenges.

According to their Twitter, the UFL team has an internal motion capture studio for the animations. UFL also has a deal with FIFPro to use the names and imaging of players, but the catalog will not be as extensive as FIFA provides. It remains to be seen how the company generates profits in the initial phases, especially given its competitors’ dominance in the market for decades. UFL has stated that its main focus will be a competitive online league, so the expectation is they might include some actual spending.

Q.: What about animations? How does the animation system work in the game?
UFL: We have an internal motion capture studio that works on animations. Both in-game and cutscenes. This is one of the most important and complicated parts of football simulation games.

They will need to adopt a very aggressive advertising and PR campaign however, to draw in enough willing people who want to make the switch over from FIFA and eFootball.

Yes, this is the official motto of the UFL but the meaning behind the same is not entirely clear at this point in time. Could it be that they are providing a game for all kinds of fans, without too much spending required? Or the fact that the level of gameplay will be equal across devices? Their most recent update gave another interesting clue as to how UFL would like to get the attention of everyone.

An important message from our team ⬇️ pic.twitter.com/5NF5kGoXxh

They are setting up a Discord channel to get feedback and responses from the fans on a wide scale, while also revealing that production of the game is in its final stages. A very intriguing addition to the footballing calendar is all set to arrive and along with the on-field action, UFL is aiming to take the sports gaming world by storm.