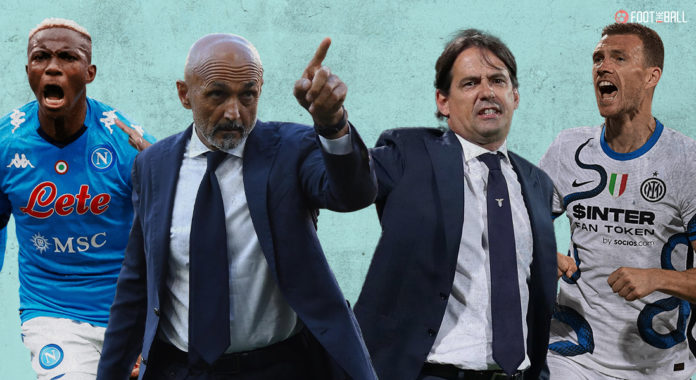 It’s first meets second in Serie A as upstarts Napoli host defending champions Inter, with only a point between the two sides.

The Partenopei have won four of their six matches since the start of the new year, including three on the bounce coming into this one. Their only defeat in this run was the humiliating 5-2 loss to Fiorentina in the Coppa Italia quarter-finals.

Luciano Spaletti’s side are the meanest defence with only 16 goals conceded so far, but it will be a huge task to keep Inter quiet for the full match. Victor Osimhen being fully fit is a big boost for the side as their goals have been spread out across the different attackers this season. All of them will need to be at their best if Napoli are to dislodge their opponents from top position.

Inter are looking well set on their road to claim the title once again. Only two defeats all season (fewest in the league), 54 goals scored (most), and 19 let in (second lowest) all point to a well-oiled machine that is in superb shape. A surprising 2-1 loss to arch rivals AC Milan in their last league match was followed by a commanding 2-0 victory against Roma in the Coppa Italia.

Edin Dzeko has been a great addition while Alexis Sanchez is looking back like his old self again. If the three-man defence can counter the three-man attack, then Inter have a real shot at winning. The lead at the top is getting uncomfortably tight so Simone Inzaghi will take the win as it will leave a game in hand for them to get the extra cushion.

Napoli have got back their AFCON stars, with winner Kalidou Koulibaly set to slot right back in. Piotr Zielinski and Hirving Lozano have injury bugs which could see them only make the bench.

Inzaghi can have Alessandro Bastoni on the sidelines, as the defender exited the victory over Roma with an injury. Lautaro Martinez should be back in the lineup again.

Having missed AFCON due to a face injury, Osimhen will be keen to finish the second half of the season on a high. Six goals this season in the league may not be his best yet but his performances have been getting back on track in recent times. He has been involved in 3.15 shot-creating actions P90 with 6.78 touches P90 in the opponent’s penalty area, which just goes to show how involved he is in attacks.

Victor Osimhen has scored more goals than any other Napoli player across all competitions this season:

Osimhen’s towering presence in the box is also a threat through crosses as Napoli have Lorenzo Insigne and Dries Mertens. However, it will not be easy muscling with the three burly centre backs of Inter but Osimhen’s quickness can be the difference on the ground. If he can set up transitions and hold the ball up, Napoli can have a good few shooting chances.

The revelation that Dzeko has been with Inter has been one of the storylines of Serie A this season. Nine goals and three assists is his best scoring season in two years, but Dzeko is in no mood to relent yet. The 9.35 progressive passes P90 received shows how Inter always look to find him in attacking areas and he himself makes 2.63 progressive passes P90 to his support crew.

Furthermore, he is a canny operator in the air too while his technique remains top notch as he has shown multiple times already this season, but pace might be a factor. Napoli have to quickly close down the spaces and get tight in order to halt his advances but given the way the wingbacks operate, Dzeko’s manoeuvring movements will be dangerous.

This match is extremely tight to call as the two teams involved are so closely matched. FootTheBall predicts a 2-1 win for the Nerazzurri.