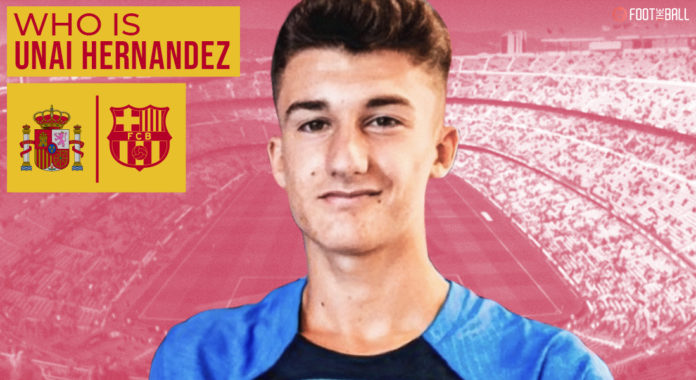 Barcelona have been having a truly marvelous transfer window. From being certified “broke,” to buying Robert Lewandowski and Raphinha for hefty fees. Moreover, Franck Kessie and Andreas Christensen have joined on free transfers.

Pablo Torre has arrived from Racing Santander. All of it has been aided by the “economic levers” that president Joan Laporta loves talking about. Therefore, it is easy to miss one of the rather quiet signings that the Blaugrana have pulled off.

Unai Hernandez has come from the youth team of Girona in the Segunda Division. The 17-year-old is following the “Pedri path” and would hope to have the same impact over the coming months.

Who is Unai Hernandez?

Unai Hernandez is a central midfielder who played for the U17s at Girona in 2021-22. He has been one of the brightest players in the lower leagues over the past couple of years.

Hernandez would fit nicely with the Barcelona youth academy, La Masia, given that they have been excellent in producing midfielders. Pedri, Gavi, Nico Gonzalez, Rique Puig, and others have all had first-team action.

Therefore, it will be no surprise if Hernandez makes appearances in the 2022-23 season. Xavi has never been averse to trying out youngsters ever since the early days of his reign.

Unai Hernandez has been touted as a great signed with Barcelona’s scouts able to spot his talent. He has the potential to take over a starring role in the midfield three in the coming years.

Who is Joan Gamper, the founder and visionary behind the FC Barcelona of today?

Moreover, Hernandez is also part of the exciting Spanish revolution that is happening with the national team. Although he is yet to play for any of the national youth teams, it will not be long before he is appearing for them.

Hernandez has kept an excellent form over his Girona years and that should see him make the step up with Catalans quickly.

The midfielder loves to maraud forward and score goals. Unai Hernandez is a ball playing midfielder who can do a lot of things when he is given the chance. His lung bursting runs and shooting has always been a plus point.

Barcelona can go for yet another young star in Alberto Moleiro, dubbed the “next Pedri”

Hernandez loves to play from the left side of midfield, even though he is right-footed. This enables him to unleash shots at a quicker pace. The acceleration he gets is terrific which allows him to pull away from defenders and bamboozle markers.

Therefore, it is no surprise that Hernandez scores often from his position. Barcelona have been targeting midfielders who can score more regularly, and Hernandez fits the bill.

As mentioned above, Hernandez loves getting forward whenever the opportunity rises. He has a great balance for someone who is 5’8″. Moreover, Hernandez can also benefit from defensive screening behind him.

Barcelona is “more than a club,” but what does it actually mean? We explain here

At Girona, he was able to use his superb ball-retention skills to progress play and act as the linkup man. There is no doubt that he will be scoring a fair amount of goals. However, the fact remains that he is a young player who needs a lot of guidance.

Barcelona have signed 16-year-old midfielder Unai Hernandez from Girona. Last season he did this against them.pic.twitter.com/kyi73XAYEt

Therefore, Barcelona will know that not pushing him too hard right from the off will be key. Hernandez can continue his development with the youth team, and can be eased into the senior setup soon.

Unai Hernandez will join the Juvenil A team, which is the U19s. Barcelona have better the quality of La Masia immensely in recent times after a few dormant years.

Xavi has integrated several teenagers from the setup ever since his appointment. Hernandez has the qualities to become the next regular feature soon. However, given the congestion in the midfield domain, he might have to bide his time a little more.

Barcelona know they cannot only rely on young talents in their quest for silverware. Therefore, the opportunities will be there, but patience is the watch word.