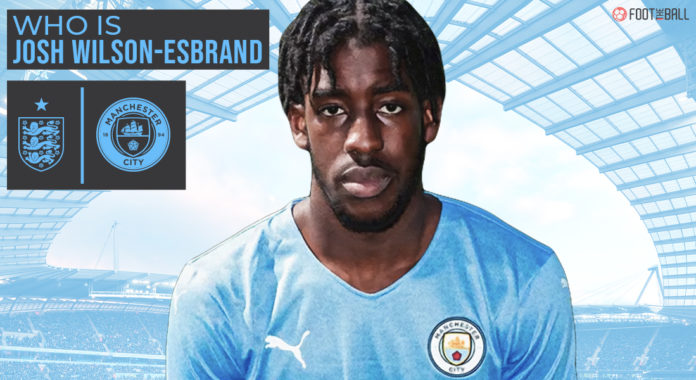 Manchester City find themselves in a peculiar position. One of the richest clubs in the world have only two senior fullbacks. City sold Oleksandr Zinchenko to Arsenal, leaving Kyle Walker and Joao Cancelo as the starting names.

Kalvin Phillips is the perfect upgrade on Fernandinho, and he can fit right into the system

Nathan Ake can play leftback but he is primarily a centre-back. City are trying to sign Marc Cucurella from Brighton. However, progress has been slow on that front.

Guardiola has been impressed with the youngster’s mentality and comfort on the ball. Moreover, he has hinted that there could be plans for him to play for the senior-team soon.

The 19-year-old left-back joined City’s U18s in 2019 from West Ham United. Wilson-Esbrand has quickly risen through the ranks during his three-year stay so far. He is now part of the Elite Development Squad (EDS) and has even made his senior debut.

Wilson-Esbrand was one of the many young talents who started City’s big 6-1 win over Wycombe Wanderers in the EFL Cup. Given that Guardiola knows the importance of a left-back, Wilson-Esbrand could be the perfect backup to Joao Cancelo.

What a way to end pre season!!💙🤞🏾 pic.twitter.com/bmEbFOBPw6

There is enough time for him to keep continuing his development with the U23s too. Therefore, it certainly looks like there’s a bright future ahead for the teenager from London.

For Josh Wilson-Esbrand, the sky is the ceiling. At least Guardiola thinks so and has not been afraid to say it. Speaking after the match against Bayern, the Catalan remarked,

“The guy has a good one-v-one, doesn’t feel the pressure in the ball. How much our back four will press, he didn’t lose many balls. He did a really good game. If we can control him and avoid injuries we can have a full-back for many years.”

Indeed, Wilson-Esbrand could the answer to the problem City have right now. Guardiola has been very keen on giving youngster minutes in domestic competitions.

That is how James McAtee, dubbed the ‘Salford Silva,‘ Liam Delap, and others have all made their names more known. Wilson-Esbrand is even more in an advantageous position given the precarious situation at full-back.

However, that does not mean it will be an easy ride. City will keep pushing for an established name as their aim is always winning silverware. If the 19-year-old keeps proving his worth, the Premier League debut could be on its way soon.

As mentioned above by Guardiola, the injury bug has not been kind to Wilson-Esbrand. His career stats read 44 matches combined in the U18 Premier League and Premier League 2 combined over three seasons.

Therefore, keeping fit is one of the key factor in deciding his senior future. He has had one goal and five assists during this spell which bode well.

"We believe he has potential. He's aggressive enough to win the duals and with the ball he's so, so clever. So clever. Good 1 v 1, he doesn't feel the pressure with the ball… If we can avoid his injuries, we can have a full-back for many years." pic.twitter.com/rhuXFYU0aB

As a full-back for City, Wilson-Esbrand will have to excel on both sides of the pitch. Guardiola has his full-backs regularly bomb forward.

This has been evident over the past couple of seasons with Cancelo and Walker. Therefore, having a final product of superb crossing or finding attackers will be great. Wilson-Esbrand knows there will be no easy route to becoming a starter so he will have to keep on grinding the basics.

Josh Wilson-Esbrand’s main facets have already been highlighted by Guardiola. He has the nous of dribbling his way out of trouble. Moreover, there is also a calm head which means he can take time before playing a pass.

Is Erling Haaland the missing piece for City’s UCL hopes? We find out here

Wilson-Esbrand may be caught out once a while as his adventurous nature also has risks. The improvement of his physicality will also be an issue. Given his excellent pace, Wilson-Esbrand can catch up with attackers down the flank.

However, he has to be wary of being double-teamed or running into a trap at the wrong areas. A great crossing ability combined with solid aggression in retrieving the ball is the way to go.

It is no surprise that Wilson-Esbrand’s preseason performances have caught a few eyes. Fabrizio Romano reported that there have been Premier League clubs asking to take him on loan.

However, City have rejected all such approaches and would likely continue doing so. Guardiola is a fan so that means there is every possibility of Wilson-Esbrand becoming a backup to either Cancelo or a new signing. That would really kickstart the youngster’s career at the top level.